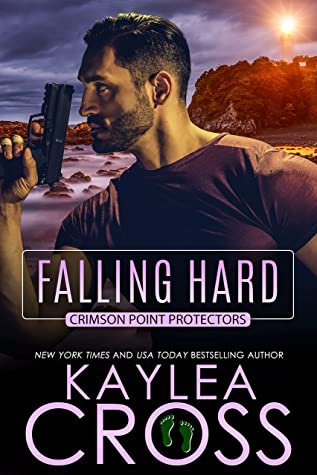 Danger is closing in.
Kerrigan Whitaker has spent the past two years reinventing herself into the strong, independent woman she’s always wanted to be, and running her first ultra marathon is the chance to prove to herself and everyone else how far she’s come. Her failed marriage made her wary of relationships, so she’s not ready to get involved with anyone else. Not even the man she secretly fantasizes about—who also happens to be her brother’s best friend. But when people she works closely with are murdered, she goes to the only place she feels safe—Crimson Point, and the man who tempts her like no other.
And the killer is closer than they realize.
Air National Guard Pararescueman Travis Masterson loves his career and has dedicated his life to saving and protecting others. There’s only one thing missing. Kerrigan—but she’s determined to keep walls up between them. He understands why she’s gun shy, but he can’t let her go. Not when every instinct is screaming that she’s it for him. After a shocking attack leaves her in the crosshairs of a cold-blooded killer, Travis is the only one who can save her. With her life in his hands, he’ll risk it all to stop the killer and protect the woman he can’t live without.

Kerrigan and Travis have been friends for years thanks to Kerrigan’s brother. Travis and he have been best friends since they joined the military. Travis has always watched out for Kerrigan, had a soft spot for her, but he never planned to make a move. Until it just happened. Kerrigan always wanted Travis, but knew he was out of reach. But with her safety on the line, she knows he’s the one man outside of her brother she can trust. Will these two get their happily ever after or will it be snuffed out before it’s too late?