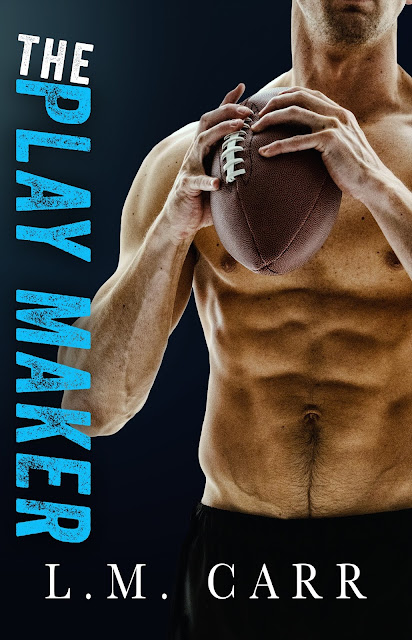 Check out the HOT new book from L.M Carr! The Play Maker is LIVE!

Playing football ruled every decision Julian MacIntyre ever made, including leaving his high school sweetheart behind to follow his dream. Sidelined by an injury on the field, he’s now making a huge comeback to the NFL as the league’s youngest head coach.

He wants it all. The glory, the job and the girl he walked away from years ago.

As one of the top sports reporters, Addison Hamilton has made a name for herself in a male-dominated industry. Proven to be a hard-nosed journalist, she asks the tough questions, but when given the opportunity to interview the man who broke her heart, is she willing to cross the lines of professionalism to get the answers she needs?

Julian and Addison once had it all. Then life happened and tore them apart. Its been a decade and they are finally face to face addressing their torrid past. Will Addison be able to set aside her pain and anger aside and see Julian for who is now or will she forever hold the past against him? Only one way to find out.

I liked The Play Maker but I didn’t love it. I had no problem setting the story aside to adult. It honestly could have been just me and nothing to do with the book itself. Because honestly this kind of story is right up my alley. With that being said at times I wanted to punch both characters in the face for acting younger than they were. But like I already said that just could be me. If you take a chance on The Play Maker I hope you enjoy it.

EXCERPT
At the knock, I grab the cash and open the door.
“Hi.”
My mouth drops open and my eyes grow wide. “Julian?” I stammer. “What are you doing here?”
“I wanted to see my girl.” He holds up the takeout bag. “I have food.”
I snatch the bag, then step into the hall, looking around. “Nope. Don’t see your girl anywhere.”
“Funny.” Julian places his hand on my abdomen and guides me back into the apartment, an amused look on his face.
Walking backward, I stop and turn from him when my feet feel the transition between hardwood and tile. I distance myself from him and hurry into the kitchen to gather dinnerware.
“Have you eaten?”
I get no response.
“Hello?!” I ask, glancing over my shoulder, catching him staring at my ass. “Take a picture. It’ll last longer.”
My comment jars him and he looks up at me, a smirk on his face. “I don’t need to take a picture.” He taps his temple. “I’ve got an image of that perfect ass right here.”
I snort. “Are you hungry? There’s more than enough for two.”
He nods, striding over to where I stand with two dishes in my hands.
“I am hungry, but not for food.”
Julian extends his arms and places them onto the countertop, caging me in. He leans toward my neck and inhales, making my eyes close. “You smell good.”
“I just showered,” I reply breathlessly, desperate to maintain my composure, quickly losing the battle.
His body flush against mine, his erection presses into my stomach as he dots the skin of my neck with soft kisses until he reaches the corner of my mouth.
“I love you,” he murmurs.
My body stiffens and eyes shoot open. I shake my head as I try to refute his words, but he covers my lips with his, staking his claim. I feel the flames ignite in the pit of my belly as he clutches my face, deepening the kiss. My lips part, welcoming his tongue into my mouth.
Kissing Julian is unlike anything else I’ve ever felt. I lose all sense of awareness as he continues his relentless, yet gentle pursuit to drown me in his affection. The feeling of his tongue tangling with mine adds fuel to the fire simmering in my core.
He lowers one hand to my waist, gripping it firmly to pull me even closer, causing my back to arch. Unable to stand on my weakened legs, I raise my arms and rest them on his shoulders. A loud crash suddenly stills our kiss.
“What was that?” I mumble against his mouth.
Pulling back, a grin appears. “The dishes…”
I raise my gaze from his eyes and notice my hands empty, the plates shattered on the floor. I smile. “It’s your fault. You can’t kiss me like that when I’m in the middle of something.” I lower my arms and walk to the closet, grabbing the broom. “You turn my brain to mush.”
“And what about your body?” he asks with raised eyebrows.
I quickly sweep up the pieces and place them into the trash, then put away the broom. “I think you already know the answer to that.” 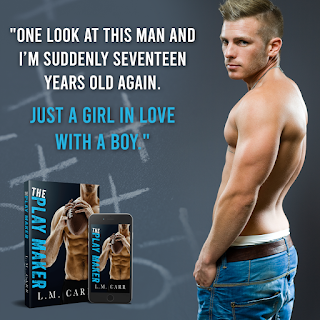 ABOUT THE AUTHOR
Living in Connecticut, L.M. is an educator by day and writer by night. She's a lover of chocolate and Hallmark movies; they come a close second to her husband and three kids.

Her work is considered realistic and relatable Contemporary Romance with an element of suspense.

To date, nine titles have been released since 2015.

The Giving Trilogy follows a school teacher and a single father.

The Stones Duet (Casting Stones & Conquering Stones) details the journey of a war veteran and his search for unconditional love.

From A Distance, inspired by true events, is about unrequited love that is found in an unexpected place.

The Love Duet (Entitled & Entrusted) is about earning love and protecting it.

The Play Maker offers a second chance at love when a football player comes back for the girl he loves.

L.M. Carr is a lover of "Happily Ever Afters" because the world is filled with enough sadness. Reading is an escape in which anything is possible. But like in reality, stories sometimes take you on a journey through Hell before you can reach Heaven. 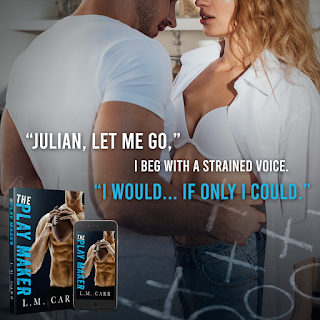 GIVEAWAY
The author is giving away a $25 Amazon Gift Card from her author page. Please direct readers to her page to enter: LMCarrAuthor_FB