Release + Review - You Belong With Me - Kristen Proby 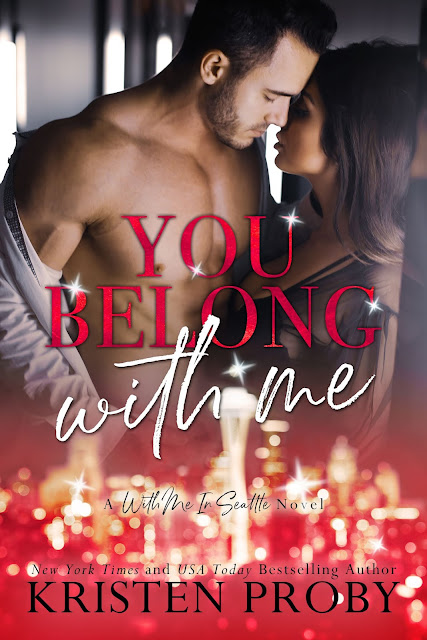 “A suspense filled version of the Montgomery’s! So sexy and full of angst! This is a side of Kristen Proby that I’m dying to read more of!” -#1 NYT Bestselling Author Rachel Van Dyken

You Belong with Me is now live!

Elena Watkins is used to getting what she wants. She grew up the daughter of one of the most powerful mafia bosses on the west coast, an indulged, rich girl who got away with everything.

Except the love of her life.

Archer was the king of their high school. His charming grin swept her off her feet. Days after graduation, they ran away together and eloped. Elated to spend the rest of their lives together, Archer and Elena were on cloud nine.

He swore to keep them apart, even if it meant taking Archer’s life. Knowing what her father was capable of, Elena left Archer, and never looked back. The pain of leaving him would pale to the pain of losing him.

That’s what she’s told herself every day for twelve years. But now her father is dead, and Archer is back. Finally, they should be able to piece the broken pieces of their love back together.

But the mafia has a long memory.

Okay, so I’m a huge fan of the With me in Seattle series, so I feel like I’ve been waiting for Archers story FOREVER! And here it is! *Cue girly scream*

Archer fell in love and married young only for her to go MIA. She came from a family with questionable ties. Ever since, he’s been looking for her. He knows his wife would never willingly leave him. When he finds her, will he still love her? Has he been living with ghosts of his past and let them shadow his time with her? Only one way to find out.

Proby just has a way with words. It’s not fair. She pulls you in and doesn’t let you up until those two words at the end. You belong with Me was everything I could have hoped for it to be. I just hope Proby gives us another sneak peak of this couple later on again.

I’ve always hated this room. My father’s office is grand, full of honey oak bookcases, a massive chandelier, and a desk in the center of the space that’s bigger than the bed I sleep on. Floor-to-ceiling windows are at his back and look out over the estate that he insisted on but, in large part, ignores.
Whenever I’m due for a massive lecture, this is where he drags me.
“May I please speak with you?”
“What is it?” He doesn’t look up from his computer, which doesn’t surprise me.
Paying attention to his daughter has never been a priority for this man.
I’ll just share my news and go straight to my room, pack my things, and be out of here for good.
I can almost smell the freedom. I can’t wait to move in with my husband. My husband. That word makes me want to spin in circles of excitement. Archer and I will make a home and have babies. His family is wonderful, and there will be so much love in our household. Our kids will never question whether we love them. They’ll never be afraid. And when the time comes, they’ll be able to marry whomever they please.
“I got married.” I square my shoulders and lift my chin. “Three days ago.”
I’m not afraid of my father. Not now. But my stomach quivers with butterflies.
I’m eighteen years old. An adult. And I’m able to make my own decisions without influence from my parents.
What can he do? What’s done is done. He looks up from his desk, and his cold eyes narrow.
“And who, exactly, did you marry, Elena?”
“Archer Montgomery.”
He sets his pen aside and leans back in his big, black chair, silently watching me. His calculating stare makes me want to squirm, but I hold steady.
“Isn’t that the boy I told you to stop seeing a year ago?”
“He’s a good man, Dad. If you’d just give him a chance—”
He stands and paces behind the desk, looking out the windows and shoving his hands into his pockets.
Maybe he’ll just tell me to leave. That would be the best-case scenario.
“What is your last name, Elena?”
“Montgomery.”
“Don’t.” His voice isn’t loud, but it’s firm.
“Watkins.”
He turns and stares at me impassively. “That’s right. And that last name, along with the Martinellis’, holds more weight than you can ever fully understand. It means that, as my daughter, you don’t have the freedom to marry whomever you choose, whenever you decide to do it.”
“I’m an adult.”
“You’re my daughter!” I blink at the spurt of anger. He’s not impassive now. His eyes shoot daggers at me, and sweat breaks out across my skin.
“Dad, I love him.”
He shakes his head and waves off my comment as if it’s an annoying fly buzzing around his head.
“We’ll have it annulled immediately.”
“No.”
He lifts an eyebrow. I’ve never told my father no. I don’t think anyone in his life ever has. No one would dare. “Excuse me?”
I lift my chin again. “No.”
He stalks around his desk and grips my arm just above my elbow, almost painfully, and drags me through the house, up the stairs, and into my bedroom.
“You’re putting me in time out?”
“I should have done this a long time ago. You’re too spoiled. Too indulged. You think you can defy me, go against what’s best for the family like this?”
We keep moving quickly through the room to my closet, where he pulls a sash off my robe, yanks my arms above my head, and ties me to the light fixture in the middle of the room.
He steps back, barely breathing hard.
“This is where you’ll stay until you come to your senses.”
And then he walks out.