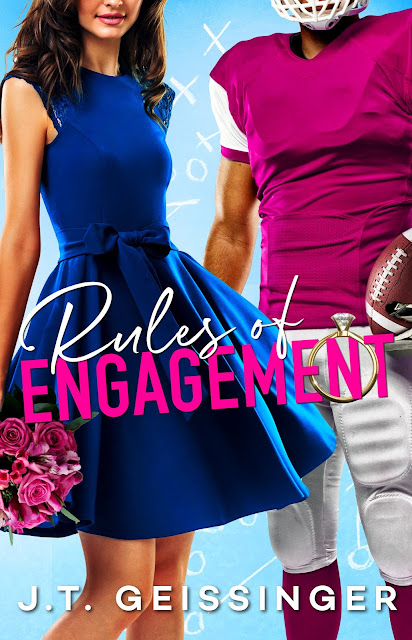 Love is a battlefield for a quirky matchmaker and the cocky football star who hires her to find him a wife.

As the owner of Perfect Pairings matchmaking service, Maddie McRae earns her living helping others fall in love. Dubbed the Wedding Whisperer due to her success getting couples down the aisle, the sweet Southern belle knows that the foundation of wedded bliss is built on similarities: opposites might attract, but they don’t stay together.

Which is why she’s holding out for her own Prince Charming, a perfect gentleman who will arrive one day and sweep her off her feet with his devotion, kindness, and charm.

Rude, arrogant, and notoriously allergic to monogamy, the hottest quarterback in the NFL is Maddie’s polar opposite. He’s also her new client. Her gorgeous, infuriating new client who’s paying her an outrageous sum of money to find him a wife. With his multi-million dollar contract on the line due to his behavior on and off the field, bad boy Mason is willing to pretend to settle down.

But when he starts to fall for the adorkable matchmaker who can’t stand him, the playboy finds himself in the game of his life to keep something he never thought he’d lose—his heart.

Maddie and Mason are about as opposite as can be. He’s loud and crass, and well she’s a true southern woman. Swearing is beneath her and she believes in love. Unlike Mason who doesn’t think love exists. These two go at it, head to toe battle of the wills. Yeah, they have chemistry but will they be able to set aside their hard heads and find love with each other. Or are they destined to be enemies?

Rules of Engagement was a cute story. I love a good opposites attract. The banter between these two were solid. My only complaint if I need one is, I wish we got more of them together, together and less of them holding out. But beggars can’t be choosers and Geissinger still gave us a solid book I think you’ll enjoy.

Jennifer's Review
Great sports romance! Rules of Engagement was a sweet, quick read. I enjoyed the plot and characters in the book. It was an interesting way to tell a story, but very entertaining.

I really liked the plot of the book. It is definitely an opposites attract type of book. The two characters are written beautifully. I loved the character development. The author nailed it!

The heat in this book was good. I loved the buildup. I really enjoyed the push and pull from the author. The writing style was great. The lace of the story was steady. I liked the minor characters as well. My only wish is that there was a lead in to another book. I'd love to get to know auntie more.

Overall, I enjoyed the book. It was a bit quirky, but that makes it different than others. I hope this author visits this world again.

About J.T. Geissinger
J.T. Geissinger is a bestselling author of emotionally charged romance and women’s fiction. Ranging from funny, feisty rom coms to intense, edgy suspense, her books have sold more than one million copies and been translated into several languages.

She is the recipient of the Prism Award for Best First Book, the Golden Quill Award for Best Paranormal/Urban Fantasy, and is a two-time finalist for the RITA® Award from the Romance Writers of America®. She has also been a finalist in the Booksellers’ Best, National Readers’ Choice, and Daphne du Maurier Awards.

Her first novel was published in 2012. Since then she’s written eighteen more novels. When she’s not writing, she’s reading, drinking wine, surfing the internet, and daydreaming about all the things she’s going to be when she grows up. She lives near the beach in Los Angeles with her husband and deaf/demented rescue kitty, Ginger.