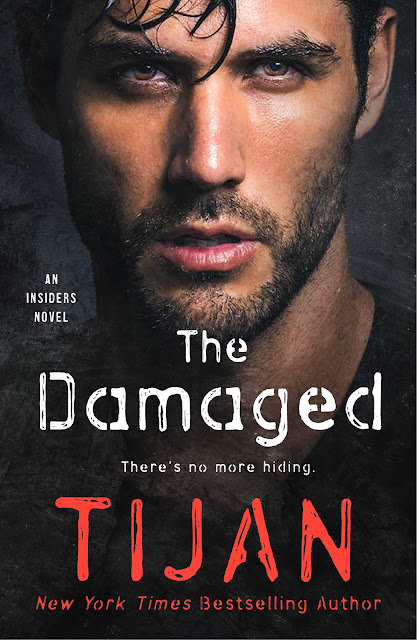 The Damaged, the next unputdownable romantic suspense in The Insiders Series from New York Times bestselling author Tijan, is now available!

No longer an outsider, Bailey has a family and love that she never could’ve imagined.

Used to living in the shadows, Kash will now do anything to protect his family and his woman.

They will take on the world together…

In the meantime, stunning motives, lies, and explosive secrets continue to unfold.

1. Quinn is in jail, awaiting trial.

3. And what is Calhoun plotting? More importantly, will Kash discover it before it’s too late?

Everything will come to a head as passion and danger ignite in The Damaged. 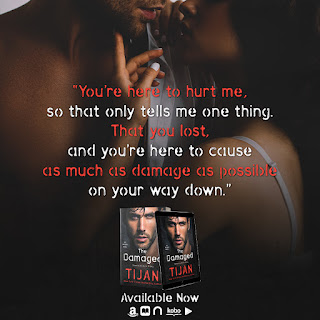 The windshield wipers were busy at work this morning. It’d been raining since late the night before, and now there was just a whole dreary feel to the day. Dark and gloomy, matching my mood. It was perfect.

“Are you nervous, miss?”

I wasn’t responding, because this isn’t how things were supposed to be. I wasn’t supposed to wake up in the middle of the night and find the bed empty. And I wasn’t supposed to have to be escorted by one of our guards down to the apartment building’s gym to find my boyfriend , the guy I loved, the guy who was so not a secret from the entire world anymore, pummeling a boxing bag so hard that his knuckles ripped open every night. It was not right that I had to stand on the side, waiting for him to fight through his haze before he noticed I was there, and then watch as blood dripped from his hands to the floor.

But all of that was happening. Because three weeks after there’d been a kidnapping attempt on me, after he had saved me, everything was just, simply, not okay.

To be more frank, everything was shit. And here I was. In the back of an SUV being driven by one of my two personal bodyguards, to a school that I used to daydream about attending, while my boyfriend, that guy I had come to love so much, was heading into his own personal nightmare. Fitz, my guard, clued in on my state and didn’t ask again, but his eyes were on me . He saw. He more than saw, and I knew I’d be getting a call from Kash about two minutes after the first chance Fitz had a moment to text his boss that I was not okay.

Because I wasn’t. Today was the day all my dreams were supposed to come true. Instead, I was a week late going to my graduate program and I wanted to be anywhere except where I was going. And I had no say, because the world found out in a big way I was the daughter of Peter Francis, a tech legend that I’d grown up idolizing until I found out myself, this past summer, that he was also my father.

And then there was my boyfriend, Kash Colello, whose grandfather was one of the richest men in the world, but that came with strings and dangerous alliances with the dark underground of the world. My boyfriend, with his inherited wealth, now that he had come out of the shadows to the world, and whose “coming out” was even bigger than mine because of his connections and his family, was now the ninth wealthiest man in the world.

Life as Peter Francis’s daughter, life as Kash Colello’s girlfriend, was a whole lot different than life had been as Bailey Hayes. There were rules and expectations and lots and lots of people watching you.

Add THE DAMAGED to Goodreads: https://bit.ly/3wB5VPA

Start the series now with THE INSIDERS!

Add THE INSIDERS to Goodreads: https://bit.ly/2GJn59t

Tijan is a New York Times Bestselling author that writes suspenseful and unpredictable novels. Her characters are strong, intense, and gut-wrenchingly real with a little bit of sass on the side. Tijan began writing later in life and once she started, she was hooked. She’s written multi-bestsellers including the Carter Reed Series, the Fallen Crest Series, and the Broken and Screwed Series among others. She is currently writing a new series from north Minnesota where she lives with an English Cocker she adores.