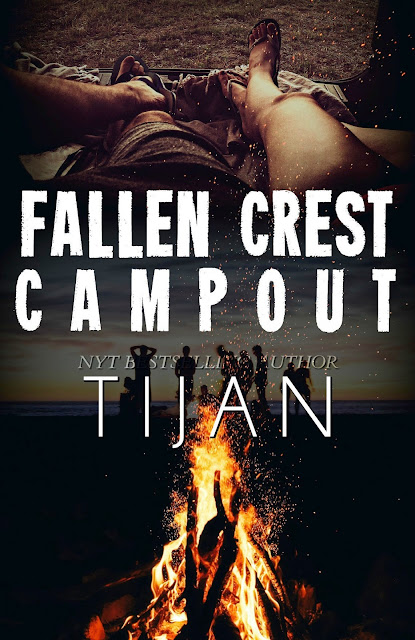 Sam and Mason return to Fallen Crest for a camping trip.
They head north, meeting up with a few friends from Roussou and enjoy a night of booze, some leapfrogging, and there’s a small therapy session to air out some tension in the group.
Empty chair, anyone? 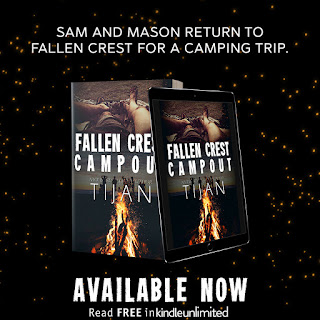 Enjoy a novella crossover between the Fallen Crest series and the Crew series!

Download your copy today or read for FREE in Kindle Unlimited!
Amazon: https://amzn.to/3d1dEwV

Start the Fallen Crest Series and The Crew Series for FREE, for a limited time only: 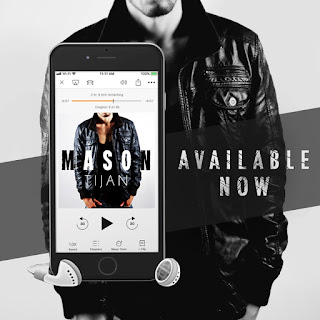 
“I don’t like this.”
A hand went to the back of my chair, a head popped up between our two front seats, and that was announced. Mason was in the driver’s seat and I was in the passenger seat. Logan looked at each of us. He was wearing a distinct frown-smirk combo on his face as he said his piece.
Problem was, he’d been saying it since we left Boston, since we landed in California, and since we’d been in the rental and driving three hours past Fallen Crest.
It’d been said. It’d been heard.
We were now at the part where we wanted to murder my brother-in-law. Or, correction, where I wanted to murder my brother-in-law. Mason was stoic and driving. He was able to get in the zone and tune Logan out. Taylor was sitting in her chair, reading on her phone. She had the whole tuning-out thing too.
Not me. I was a mom, so somehow that meant I always had to be aware and alert, and now I was close to grinding my teeth and yelling for a Logan time-out.
Five minutes in the back, please.
Mason grunted. “Tough shit.”
Nice. Maybe he wasn’t so ‘tuned out.’
I looked at Taylor. “Can you keep him under control?”
She glanced up from her phone. “You know the answer to that question. You’ve known him longer.”
Touché.
“I’m not sleeping with him.”
Taylor just laughed. “Shouldn’t have said that. He’s probably refraining from twenty different inappropriate jokes as I’m talking.”
“Ahem.” Logan gave us both a look. “It’s because I love both of you—in different ways—and respect both of you that I’m not touching that. But Sam…” Logan leveled me with an aggrieved look, his eyebrows raised. “Can you watch what you say? Old Logan would’ve been all over that one, and can you imagine the innuendos?” He gestured to himself, his face tight. “But I’m here. Being polite—”
“Sorry. I thought since you’re older and in law school, you’d be more mature.”
“It’s like you don’t know me at all.” But he was grinning.
“Logan.” Insert some assertive tone here. I had to make my point. “We got a babysitter for the weekend. I got permission for a full weekend off from my training. Your brother is on a much-needed vacation before football training starts, and I have been needing Heather time even though I saw her a few weeks ago.”
I had a point. What was it? “So shut it, okay?”
That was my point.
“All I’m saying is that we were supposed to do the yacht. Nate and Matteo were up for it. Now suddenly we’re doing a camping thing. I’m not clear on the why?”
Mason glanced into the rearview mirror. “It was Nate’s idea. He said something about family research. What’s your issue? You like camping.”
“That’s when we were young. We did stupid shit back then like. We’re old now. If we go camping, I prefer it to be on things like yachts. Or we stay in a mega-mansion and our camping is napping by the pool. I like that type of camping.”
Taylor frowned at him. “Babe.”
He shot her a look, frowning slightly, but his face softened. He reached out, touching her leg. “It’s nothing. I’ll get over it.”
Good.
That was settled.
Two minutes later, it wasn’t.

About Tijan
Tijan is a New York Times Bestselling author that writes suspenseful and unpredictable novels. Her characters are strong, intense, and gut-wrenchingly real with a little bit of sass on the side. Tijan began writing later in life and once she started, she was hooked. She’s written multi-bestsellers including the Carter Reed Series, the Fallen Crest Series, and the Broken and Screwed Series among others. She is currently writing a new YA series along with so many more from north Minnesota where she lives with a man she couldn’t be without and an English Cocker she adores.