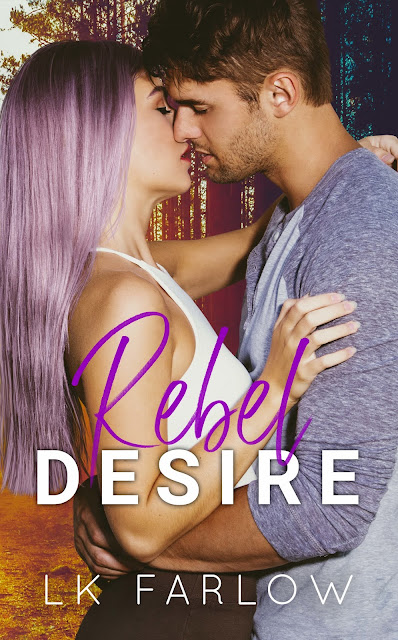 As a wedding photographer, it’s no surprise that Ashley Murphy, despite her perpetual singleness, is a little in love with love.
When she catches a hunky best man checking her out while on the job, her heart all but shouts, “He’s the one”. Until he opens his mouth. Colton Banks is a cocky lawyer with a mean streak a country mile wide.
Colton prefers order to chaos. He believes there’s a time and place for everything, so when a lilac haired hottie sends him a flirtatious wink while she’s on the job, he’s less than impressed.
When she shows up at his office a week later asking for legal help, his first instinct is to send her packing. But day after day, she returns, finding new elaborate ways to break him down.
It’s not until a life-altering surprise shows up on Colton’s doorstep that things start to change. Ironically, the answer to his problem may be his incredibly annoying, free-spirited new “friend.”
Complications. Lust. Attraction. Love.
As their tenuous friendship grows, the chemistry between them becomes a raging inferno, and everyone knows you can’t deny your rebel desires.
Johnaka's Review

To say Ashley and Colton got off on the wrong foot would be an understatement. He’s uptight and a rule follower. Ashley walks to the beat of her own drum. They probably don’t belong together, but they do. Farlow pulled me in with their story. I loved the way Ashley broke Colton down and made him soft, in a good way. The twist in this story I also enjoyed. Oh, how it made my heart flutter.

If you like a good story with a surprise single parent and two polar opposite people falling in love look no further. 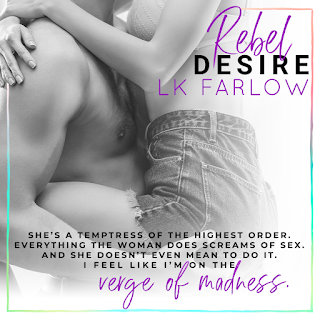 GOODREADS LINK: https://www.goodreads.com/book/show/49969155-rebel-desire
PURCHASE LINKS
US: https://amzn.to/3dhggr1
UK: https://amzn.to/2XJthTx
CA: https://amzn.to/2Xe0k34
AU: https://amzn.to/2TTMwbV
Free in Kindle Unlimited
EXCERPT
“Hello, this is Ashley.”
“Am I supposed to find your antics clever?” A growly yet refined voice barks in my ear. Colton.
“Actually, you’re supposed to say ‘thank you.’ Or are you one of those men who feels emasculated by receiving flowers?”
“No, I’m the kind of man who isn’t swayed by paltry attempts at bribery.”
Why would fate assign me such a monumental jackass as my soulmate? Clearly the universe has a sick sense of humor. “Good thing I’m not trying to bribe you, then,” I say, lying through my teeth.
“Aren’t you, though? Muffins, flowers, what’s next? Maybe a box of chocolates? Half of your peanut butter sandwich? I’m not your grade school crush. I’m a professional, Miss Murphy, and only work with other professionals, which you have demonstrated time and time again, you are not.”
I tap the speaker button on my phone and toss it down on my desk. This man makes me insane. “You are truly the most condescending man I’ve ever met. You don’t know me well enough to have formed these kinds of opinions about me.”
In all honesty, his extreme dislike of me hurts. A lot. Especially with how my heart and soul long for his. He means for his words to dissuade me—to break me—but every single insult and rebuff only makes me want to prove him wrong that much more.
“They say the truth hurts, Miss Murphy. It’s not my fault you’re ill-equipped to handle the pain.”
I clench my fists so tightly my nails dig into my palms, leaving behind little crescent-shaped marks. This man makes me want to commit felonies—you know, like murder. I wonder, since he’s my soulmate, could it be classed as a crime of passion? “I can handle everything you dish out and more.”
Colton makes a noise low in his throat, and I can nearly picture the sneer on his face. “Is that a threat?”
“It’s a promise, Mr. Banks. Do your worst; I’ll not only take it—I’ll return it back tenfold.”
“You don’t have it in you.” He laughs cruelly, the dark tenor of it winding around my heart in inky swirls.
“I’m far stronger than you give credit for.” Not to mention, my plan of attack is to repay his barbs with kindness. Something tells me that will knock him off guard far more than volleying back with harsh words or petty.
“You mistake strength for stupidity.”
“And you underestimate me.” I end the call before he can reply, crumpling down to my desk chair with my heart thundering and my pulse racing.
I’ll show that sexy, arrogant jackass exactly who he’s up against. I may be quirky and kind, but those two qualities are exactly what give me an edge. Colton Banks is used to sharks and snakes, but he’s about to be brought to his knees by a creature far more deadly—a woman scorned.
AUTHOR BIO
LK Farlow (A.K.A Kate) is a small town girl with a love for words. She's been writing stories for as long as she can remember. A Southern girl through and through, Kate resides in beautiful, sunny LA--that's Lower Alabama, y'all--with her amazing husband and four rambunctious children. When she's not writing, you can find her snuggled up on the couch watching car shows while she crochets or with her nose in a book.
AUTHOR LINKS
Facebook: http://www.facebook.com/authorlkfarlow
Twitter: http://www.twitter.com/authorlkfarlow
Instagram: http://www.instagram.com/authorlkfarlow
Amazon: http://bit.ly/lkfamazon
Website: http://www.authorlkfarlow.com
Newsletter: http://bit.ly/lkfnewsletter