How do you trust someone who is everything you’re trying to avoid?

Harper Lindell is having a bad day. You know, if a bad day consists of getting fired from your cushy job and then catching your boyfriend red handed playing hide the salami.

Sick of meeting the same guys over and over, Harper decides to try her luck at Internet dating. How bad could it be? Right?

Tate Washington wasn’t looking to meet anyone. Still dealing with the consequences of his one serious relationship, all he’s interested in is revamping his family’s behind-the-times café.

He didn’t plan on seeing the beautiful receptionist from Argo again, walking into his life to use his café as a dating hub, and using him as a BFF.

Can Harper really trust Tate, who is everything she thinks she needs to steer clear of?

Can Tate wait while Harper works through her insecurities and fears? 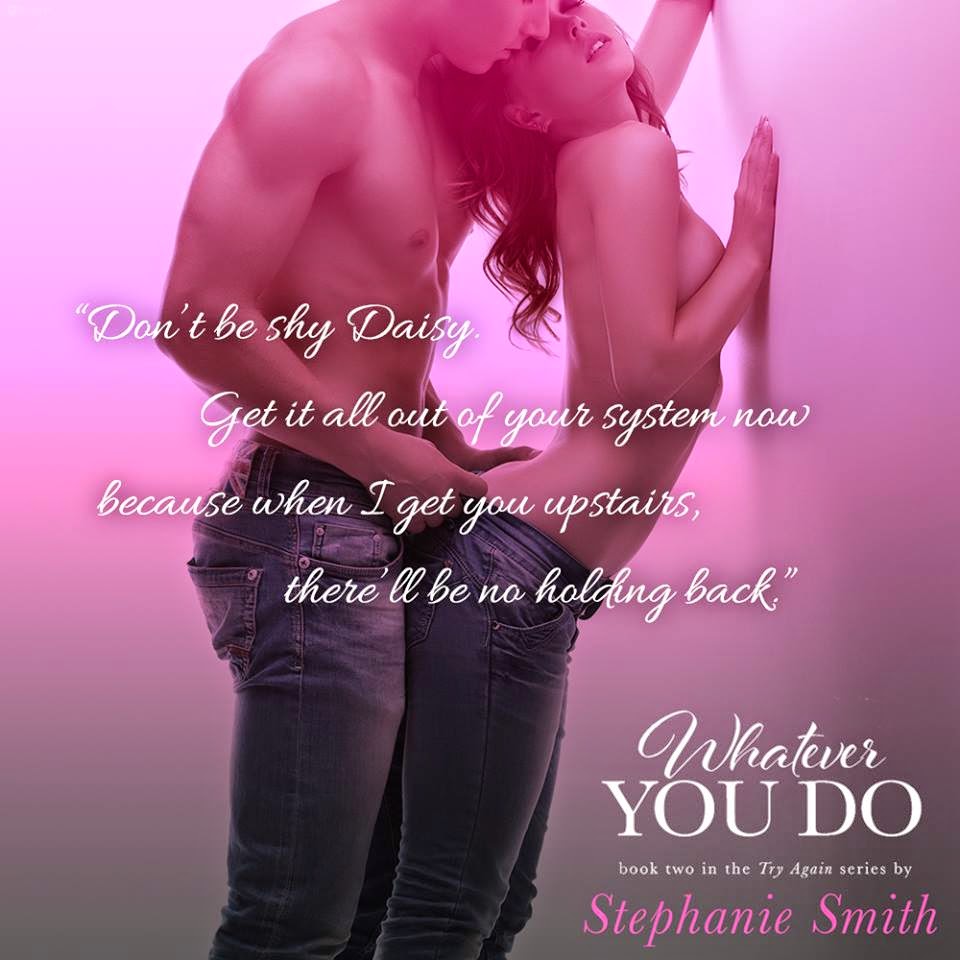 Tate chuckles as he picks up a tomato and throws it to me. Thanking my quick reflexes, I catch it mid-air.

“Here, cut those,” he says, gesturing to the pile of tomatoes already stacked on the bench next to where he is preparing bacon.

I pop the tomato down and head to wash my hands. Once I return to the counter, Tate approaches me with an apron and wraps his arms around me as he ties the strings in front. We get stuck into it and work in companionable silence for the next few minutes.

“I’m sorry about the other day,” he says, not pausing for a second from the bacon he is cutting.

Silence descends once more, and we continue our tasks before Tate speaks again. “The other day, you said how you’ve never felt an instant connection with someone before.”

“Yeah?” I ask warily, wondering if I freaked him out.

“I didn’t get to tell you that I feel the same. When we’re together, it feels right.”

Even though we don’t mention another thing about it, the silence doesn’t come again as the shots keep flowing and the music on the old radio gets louder and louder. We are laughing and carrying on and there is more ‘accidental’ touching on both sides.

‘Black Widow’ by Iggy Azalea and Rita Ora flows through the speakers and I sigh in happiness. “I love this song.” I leave my tomatoes behind to shake my hips all over the kitchen to the beat, singing along with the lyrics.

Warmth covers my back as two strong hands land on my hips. Tate pushes into me from behind and moves his hips along with my own or forces my hips to move along with his—I’m not sure.

“You’re so fucking sexy, Harper,” he whispers into my ear. “I won’t be able to keep this friendship platonic if you keep shaking your ass like that in my kitchen.” His warm breath flows over my collarbone as he nuzzles my neck and goosebumps break out across my skin. Tate must notice as he lifts his head and slowly peppers small, light kisses along the crease of my shoulder.

My head rolls back onto his shoulder, and my body liquefies at the intimate and sensual touch. He’s breaking down my walls. My common sense. He’s slowly softening me, melting me so he can mould me as he pleases, and it’s working.

As the realisation hits me, I jump out of Tate’s arms, grab hold of his hand, and pull him to the middle of the kitchen. I smile seductively at him and wink. “I’ll just have to keep you in line and focused then.”

He throws his head back and laughs, allowing me to ignore the moment and lead him around the centre workbench as we shake, shimmy, and wiggle to ‘Shake it Off’ by Taylor Swift, which is now playing on the stereo. 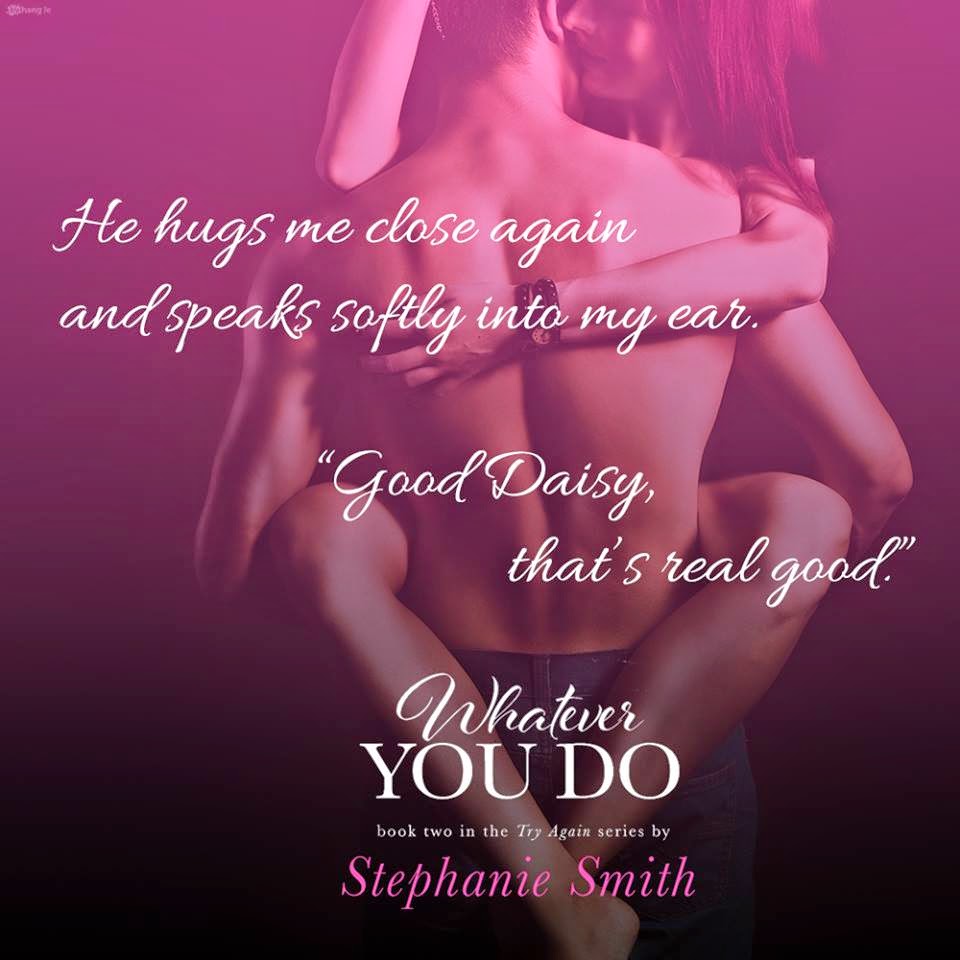 Tate Washington *sigh* Where on earth do I start, trying to form sensible comments on Tate Washington is hard. Big time hard.
Anyway, focus Louise. Whatever You Do is book 2 in the Try Again series, book 1 was Saxon and Brooke's story and I totally loved it. I didn't think, after reading Wherever You Will Go that it could get much better. I was so wrong.

This time, the story follows Harper, the bubbly, sexy receptionist who worked with Brooke and Saxon. She was sweet and funny and I absolutely knew her story would be crazy entertaining.

Harper seems to be having full on, crappy luck. From job fails, to huge boyfriend fail, all in the space of one day. This called for a change, something new and different. She decides to try internet dating!
So begins the most hilarious yet shocking visual of internet dating at it's very worst. I was in hysterics following poor Harper's lousy excuse for dates. Some of the very worst specimens seemed to be lining up for coffee with Harper, and it was all seen by Tate. Tate is what should be known as the 'Coffee shop god'. He is perfection in Male genes, and covered in ink, which helps masses. Did I mention he is totally loaded but doesn't show off about it. Yup, perfect.

Tate owns the coffee shop that Harper meets all her dates at, so he gets to watch along with all the disasters.
Although Tate has made it more than obvious he would happily take Harper out, she is determined to find herself a man who wants something more than fun. Yet this doesn't seem to stop the huge amount of sizzling, chemistry between them.

Tate’s jaw tightens as he sits eerily still and just stares at me. So still I can see the muscle in his jaw tick and the pulse in his neck throbbing.
My eyes begin travelling and I can’t help but appreciate the site in front of me. Butterflies begin to stir low in my belly and I feel warmth moving up my cheeks. Great, another completely inappropriate crush for me to harbour.
No matter what I can’t let anything happen with Tate Washington.

Harper is convinced Tate wants nothing more than a fling with her, she is totally wrong. It's obvious Tate likes Harper a lot, and is determined to show her.


Tightening my hold around Harper’s waist I pull her closer against me. Her body is tense in my arms and even though I’m happy that I affect her, I’m not happy with how. I want her to feel comfortable with me. To melt when she’s in my arms. Turn to liquid and trust I’ll hold her up.

From snort giggles, to blushing squirming, to huge sighing, this book takes you through stupid amounts of emotions. I loved the characters, and how Harper is so normal and down to earth. She is gorgeous, but doesn't know it. She has insecurities like anyone else, and is so unbelievably sweet but not in a tacky and irritating, over done way.
Tate is.. well a coffee shop god, what more can I say? But, he is not only gorgeous but a really great character. Believable and honest. Stupidly sweet to Harper, which makes me strangely jealous that I don't have a Tate of my own, to tuck in my pocket. Too weird? Oh and also to top it off, he has a growling alpha side that comes out from time to time. Perfect!!!

I fell in love with Stephanie Smith's writing in Wherever you will go, and it only got better in Whatever you do. She is fast becoming one of those author's, that you know you will love anything that they write. Steph brings out all the best aspects in her books, but makes them bigger and better the next time around. I don't think I'll forget the scripture show down in a hurry. Stupidly entertaining!!

There most definitely was not a dull moment in Whatever you do. It was full on incredible scenes, panty wetting humor, and characters that stick in your mind for a long time. I can't wait for whatever Stephanie Smith brings out next.
Hugely recommended. Sigh-worthy romance, with smoking hot scenes, and a huge dose of the funnies. 5 massive stars!!


Butterflies erupt in my belly as he stalks towards me. The excitement, nervousness and anxiousness all flow together to create the perfect high. I step backwards into the wall as Tate cages me in with his hands pressed to the wall either side of my head.

Wherever You Will Go (Try Again, #1)
Amazon US | Amazon UK

I'm first & foremost a reader & fangirl, I will always be first & foremost a reader & fangirl. I am on street teams, I pimp and I brag. I LOVE my Authors!!
I have recently started writing as a way to relax and spend some time for me. My first novel Wherever You Will Go is due to release later this year. I'm having so much fun writing my first story and I'm looking forward to the journey it is taking me on.

Posted by Louise Seraphim Reviews at 3:38 AM