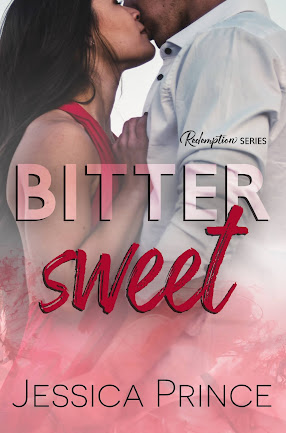 Bittersweet, a small town romance from Jessica Prince is LIVE!

Read for #Free with #KindleUnlimited

Add to your TBR: https://smarturl.it/BittersweetGR

She thought he was just a cocky, spoiled rich kid. She had it so very wrong.

Shane Hendrix had a hundred-foot reinforced steel wall around her heart to keep people out, so when she first laid eyes on Jensen Rose, she wanted nothing to do with him. But what started as disdain quickly grew into something so much more. He went from being the boy she hated to the man she loved with all her heart. Then he left without so much as a goodbye, leaving her shattered.

Jensen Rose didn’t have much good in his life. That was until he stumbled on a ray of light standing in the middle of his bedroom. He had to have her, and once he did, he loved her with every single piece of himself. But when his past threatened to rip them apart, he did the only thing he could think to protect her. He walked away.

When he returned to Redemption, Tennessee, it was with every intention of winning back the love of his life. But she’s not giving in without a fight.

And this is a battle he intends to win.⁣

Prince killed me with these two! I wanted to hate Jensen because I wanted to have my girl Shane’s back. But dang it, she made me like him! These two belonged together, but outside forces pushed them apart when they were younger. Now Jensen is back, he wants his woman and his son. Shane though is properly jaded and makes him work for it. Is she going to give him a real chance or Jensen pushing for a lost cause?

I enjoyed Bittersweet. I like how Prince does small town romances. I love this little town. I love seeing some old couples and getting caught up with their lives. All in all, I’m going to be sitting here waiting for the next book in the series.

“Sure you’ve noticed already, but it looks like big brother wants to rip your organs out through a hole he’s plannin’ to punch in your chest.”

I turned to look over my shoulder toward the section I knew Shane’s family would be sitting in, along with their other friends. They never sat anywhere else but at the pool tables whenever they came in. And sure enough, Stone Hendrix was looking at me exactly how Gage had described.

The dude had about two inches on me and a couple pounds worth of muscle. Every inch of his beefy arms was covered in colorful ink in intricate designs, only making him look even more menacing than he already did.

I’d only met the man twice back when Shane and I were together, but it had been enough for the dude to scare the absolute piss out of me. Now, not so much. I hadn’t been in a fight in years, but that didn’t mean I’d gotten rusty. If anything, with the skills I’d picked up during my time in the service, I was even better at it than I had been back then. It was just that I had my anger issues in check now.

I looked to his left and spotted Scooter sitting next to him—only slightly smaller but no less threatening—looking at me with the same scowl. Instead of turning away, I jerked my chin up, letting them know I wasn’t going to be intimidated into leaving. They knew why I was here. Hell, everyone in Redemption knew. I was here to get my family back, and I wasn’t going to let anyone get in the way of that.