The first time I saw her was across the room at a bar. I had no idea at the time that she was only sixteen. All I knew was that she was beautiful, she was sending me do-me vibes from across the room, and I was fresh off a deployment where there’d been nobody but men for nine of the longest months of my life.

The second time that I saw her was at a court hearing that would decide how long I’d be sent to prison for. She was a cute little curly-haired blonde with wide, expressive eyes, a banging body, and the reason that I’d gone to prison in the first place.

The third time I saw her was through a glass divider of the prison visitation room as she waited for her stepfather, my lawyer, to tell me how sorry he was that he lost my case. Especially when I’d been the one to kill the man that was about to kill his daughter.

The last time, the time that I decided enough was enough, was when I saw her at my bar eight weeks after I’d been set free.

Unlucky for her, I’d stopped being a good guy about two seconds after those bars closed behind me twelve years ago. Now all that was left was a shell of a man that didn’t see the good in anything. Anything except for her.

I adored Trick and Swayze. From their unconventional meeting, to the second time they meet. To say both have them have gone through h-e- double hockey sticks would be an understatement. But they both bounce back. Swayze is probably one of the strongest heroines of Vale’s in a long time (if you’ve never read Vale, all her heroines are strong as heck). Vale literally tortures her and Swayze just gets up swinging. Trick is the best kind of man. He knows what’s right and what’s wrong. And as much as he hates his feelings for Swayze, he has them. Will he be able to let go of the past and let her in?

Vale killed it with these two, and I seriously cannot wait for the next. 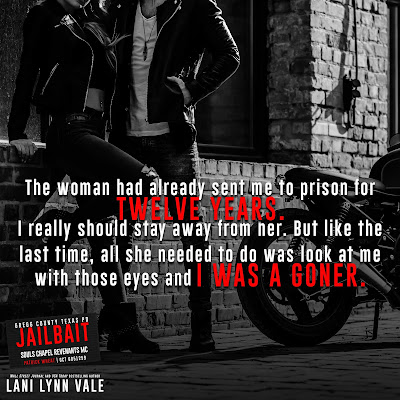