Joshua “Ruin” May has been a dick in the past. He’s trying to rectify one such dickish moment by helping out a friend, and he wants to make sure this time he doesn’t let her down. His journey leads him to Melbourne and a whole heap of unexpected trouble, namely an irritating crime boss.
Wolf.
A man who gets on his nerves and seems to revel in winding him up.
The good-looking douche sparks something unexpected in Ruin, leaving him confused.
With so much to lose and potentially everything to gain, Ruin has a choice to make. Will he figure himself out and make the ultimate decision that will change his future?
NOTE: This is the second book in the Hawks MC (next generation) series and it revolves around Ruin (Stoke's son) finding his love interest more than club life.
Louise's Review
Ruin is book 2 in the Hawks MC: Next Generation, a MM romance that has all the feels.
From the moment that Ruin and Wolf saw each other there was sparks, Ruin may not have known that those were but close quarters and Wolf’s continued flirting their chemistry was explosive and not deniable. Wolf wanted to change the future for his family’s business and Ruin was trying to find his path; they just so happen to lead to each other!
I personally enjoyed this story, one thing I know for sure is when Lila Rose releases a MM story you can guarantee that its going to be great! I cannot wait for book 3 in the series, I have fallen in love with the Hawks MC all over again.
Star Ratings; Plot: 4/5 Characters: 4/5 Heat: 4/5 Writing Style: 4/5 Overall: 4/5 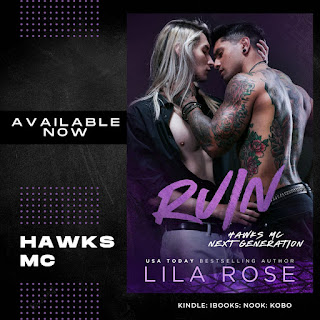 GOODREADS LINK: https://www.goodreads.com/book/show/57801001-ruin
PURCHASE LINKS
US: https://amzn.to/3eJMVqR
UK: https://amzn.to/3e2D8x9
CA: https://amzn.to/3gXXOIi
AU: https://amzn.to/3t0TvyB
B&N: https://bit.ly/3aRuJdU
Kobo: https://bit.ly/3gN10GQ
Apple Books: https://apple.co/2QInbmW
EXCERPT
Wolf looked to his watch. “I have to go.”
“Okay.” I nodded.
His gaze dipped down my body. “Are you sure you want me to go?”
My gut twisted. I looked down and saw I was half hard. “It’s called mornin’ wood.” And that was all it was. It had nothing to do with the guy in the room who looked at me like I was dessert.
Christ. It really didn’t.
“You weren’t before.”
“I was, you just didn’t notice, and why the fuck am I explainin’ anythin’ to you?” Turning my back on him, I adjusted myself and begged my dick to quit trying to get attention from just anyone.
Wolf chuckled low behind me. “I think he likes my attention.”
“You’re wrong. I’m goin’ for a shower.” I started for the bathroom.
“See you tonight, Ruin,” he practically purred.
I flicked a hand over my shoulder. “Whatever.”
More laughter followed before my bedroom door closed. I looked down at my dick. “What the fuck, man?” Of course I didn’t get an answer, but I swear to Christ, my dick had a mind of its own.
ALSO AVAILABLE
#1 Coyote
US: https://amzn.to/3i7Jk5A
UK: https://amzn.to/3j7yX3g
CA: https://amzn.to/3kLb2H2
AU: https://amzn.to/3j8yI7R
B&N: https://bit.ly/2S3wvPa
Kobo: https://bit.ly/3j1N5uK
Apple Books: https://apple.co/2S1UuhL
AUTHOR BIO
Lila was born in Brisbane Australia, her step-dad was in the Army which caused them to move around a lot. They finally settled in country Victoria, Australia. Being the youngest of four children she admits she was spoilt a bit. Even drove her mum crazy when she refused to eat meat at a young age.
Now, Lila lives with her husband and two children.
She started writing in 2013 and self-published the first of the Hawks MC: Ballarat Charter series- Holding Out. Since then, she has published eleven other titles, which range from erotica, humorous romance, YA and paranormal.
AUTHOR LINKS
Email: lilarose2678@gmail.com
Website: https://www.lilarosebooks.com
Facebook: https://bit.ly/2AD9wES
Twitter: https://twitter.com/LilaRose78
Instagram: https://www.instagram.com/lilarose78
Posted by Louise at 9:00 AM