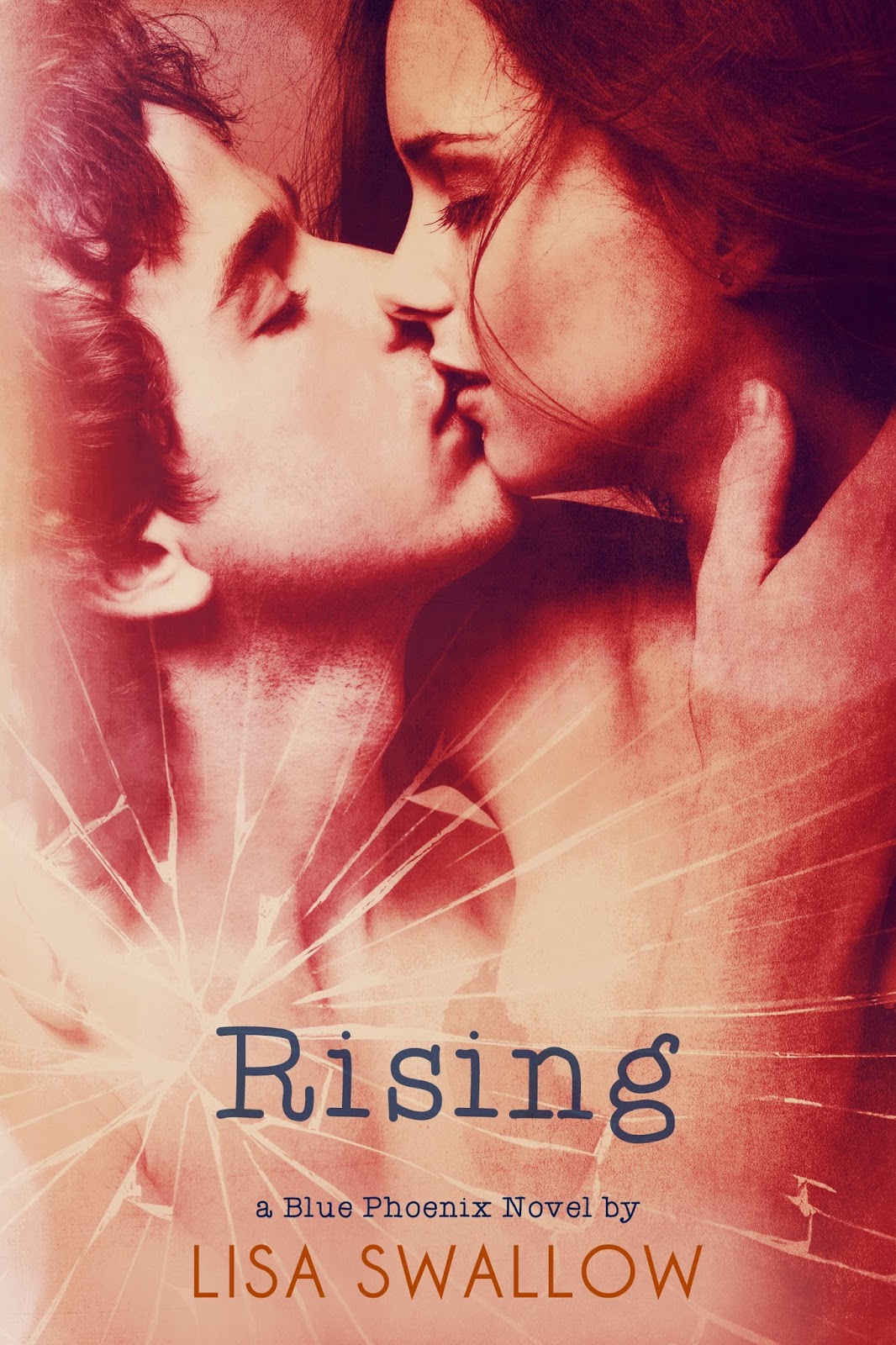 Wow! Rising, Book 4 in the Blue Phoenix series, has to be the most emotionally charged story in this series yet.
Jem Jones, Blue Phoenix lead guitarist and overall bad boy, has had a pretty shitty time of things for a quite some time. He rode the rock god wave like a pro. He was talented, gorgeous, young, and had everything going for him. Unfortunately for Jem, he also fell pray to the demons of fame and fortune. Drugs, drink, women, an overall reckless lifestyle. He went past the stage of fun and letting go, and fell in to dangerous and reckless category. After failed attempts at rehab, it took something soul shattering and life changing to wake him up. Jem admitted defeat and went to rehab again, determined to make it work this time. That was before, were now starting Jem's story and Jem is clean and trying to move on with his life. Blue Phoenix took a break after certain events starting colliding. During this break Jem is attempting to get his life back on track. He needs a distraction, and that comes in the form of scouting talent. New, fresh bands to be the next biggest thing. It's whilst doing this he finds Ruby.
Ruby Riot are an Oxford band. They have huge amounts of talent, and want to take it all the way. After a gig one night, they find Blue Phoenix guitarist, Jem Jones waiting for them. He loves their sound, and wants to help them make it big.
Lead singer Ruby, is a girl whose music is everything to her.  It's her escape from all the dark. Anything outside of music, for Ruby is pain and hurt. When she is with Ruby Riot she see's everything clearly again. She hides beneath her makeup, tattoos and blazing scarlet hair that shields her.


"The brightness of my ink matches my hair, the tattoos symbolic of my attempt to cover up the girl beneath. Some people have tattoos because they're significant. I went for the brightest pictures I liked because I wanted a rainbow of colour to cover my life."

"Ruby is the epitome of myself. She's here and her eyes are acknowledging what I repeatedly see: we're from the same place and we don't want to be there."

Jem and Ruby try to fight the attraction they have for each other, for many reasons. They both have their demons, constantly eating away at them. They appear to be perfect for each other, but is the timing ever going to be right. They have to fight certain battles before they can give in to what they feel. Neither one of them believe they deserve to find happiness in each other, and it proves to be a huge obstacle for them. 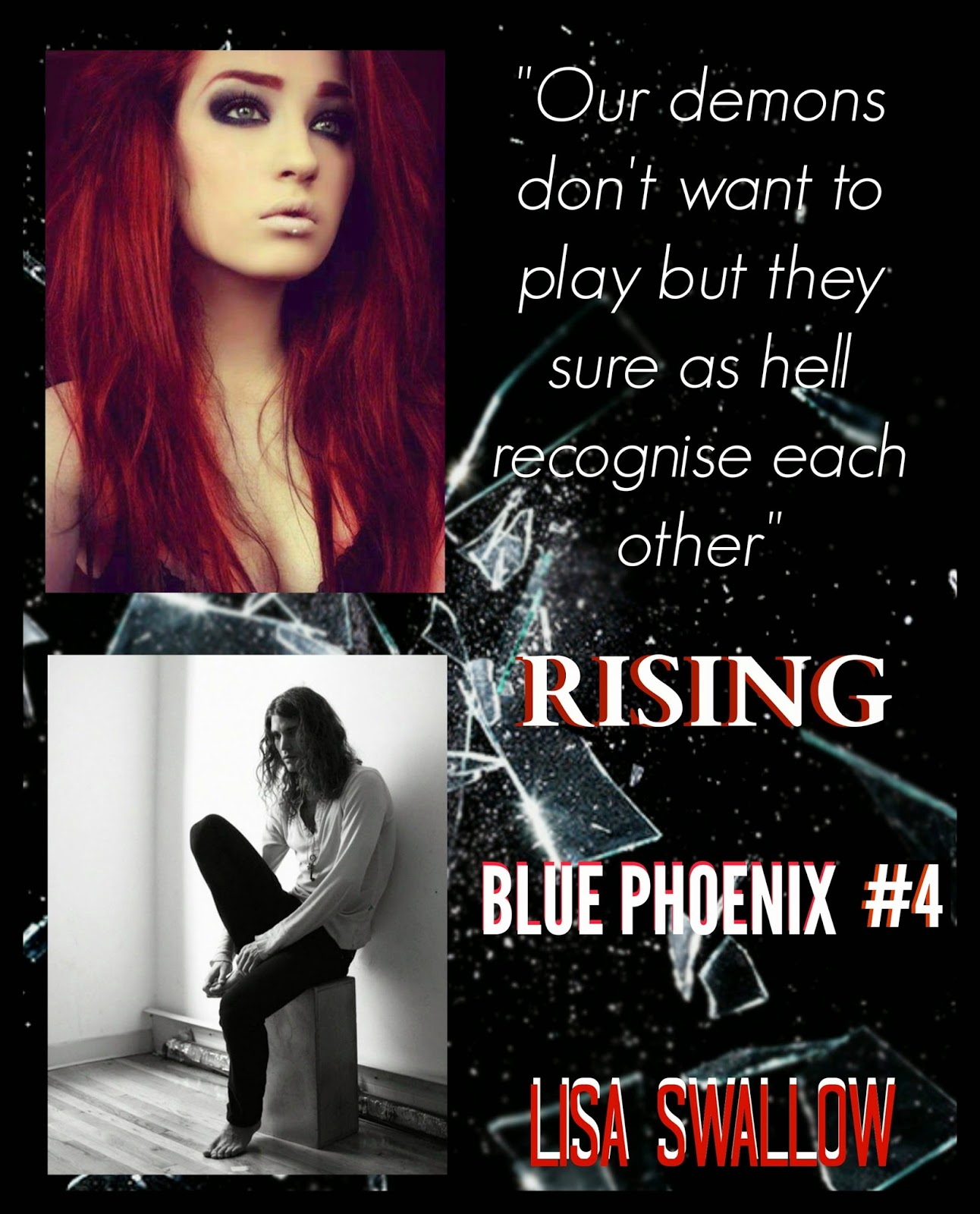 I felt Rising had such a different tone to it. It set it apart from the other Blue Phoenix books for many reasons. When we first met all the band members in Summer Sky, we got to see a glimpse of the men and it gave us a clue as to what they would be like, once their stories were told. I always thought Jem's story would be the hardest, the most painful, emotionally. Although he had the talent to wind people up (to put it nicely) and had a quite a way with words. He made trouble for some people, and made a lot of enemies. It didn't exactly paint a very pretty picture of him. He was seen to be the bad boy of the four of them, and probably not the most obvious book boyfriend material. Well, given the chance to have his story told has completely changed all that.
Jem may have once been the black sheep of the Blue Phoenix family, but after reading Rising, he has proved he can rock the potential book boyfriend title, just as good if not better than Dylan and Liam.

We get a glimpse of Jem's past, and perhaps part of why he ended up going off the rails. We also get to see him at his rawest, post rehab. He wants to change and will fight to get there, even if it's hard. Rising isn't set in the days of Jem's crazy days, nor is it set when he goes in to rehab. His story begins at the start of his last chance, to see if he can make it when some of the worst things are thrown at him. This is why I have grown to love Jem. He doesn't always make the right choices, he acts impulsively and doesn't always think of others, in his decisions. Yet, you can see why he does what he does. He is suffering, and doesn't handle it well. Ruby is the light in his dark days, and makes him want to try harder.


"With Jem, we can be in a safe place together; we don't have to be alone in the world if we share the good in ourselves. Together, now, we're wrapped on the edge of this place we belong, the shattered pieces of our lives surrounding us. With the secrets we shared came the understanding that not everything is broken forever."


Their relationship, if you can call it that to start with, was so sweet. It was almost like a first love kind of relationship. Neither of them knew the right way to do things, and made a lot of mistakes. They both had trouble communicating, and were awful with social skills, but it was sweet and funny and it made them so unbelievably perfect for each other. There was a lot of frustrating moments, watching Jem being typical Jem, but it just added to how different their journey was.
Of course this book isn't all tender romance, and learning about each other. There is a side to this book which takes a darker and far more emotional turn. I'm not going to go into the other aspects of their story, as it needs to be experienced as part of the story. I will say, be prepared for some really emotional and hard stumbling blocks along the way for Jem and Ruby. It is very raw, and will put you through some crazy emotion changes, from tears to anger, then relief....eventually.
So, be prepared for the rocky road that is Jem Jones story. Another beautiful and tender love story, but with far harder obstacles to overcome along the way. I can pretty much guarantee that readers and fans will look at bad boy Jem in a whole new light, after this story.


"To me, you're Jem and not the Jem Jones they say you are. This Jem is a good guy. Don't let anyone tell you otherwise. They don't know you."


The Blue Phoenix series has come a long way, and I have to say, I'm never disappointed. Lisa manages to keep pulling these addictive stories out of the bag. The world of Blue Phoenix is crazy and full on, but you just can't stop reading about them. Even forgetting they are fictional most of the time. It's not just the stories and characters that have me keep coming back for more, like the groupie that I am, but also Lisa's captivating writing. She still continues to make me feel, like I couldn't possibly stop reading. I can't wait for whatever comes next. Everything from this world is full on, nail biting, and breath holding entertainment. Fully recommended to everyone. 5 Stars. 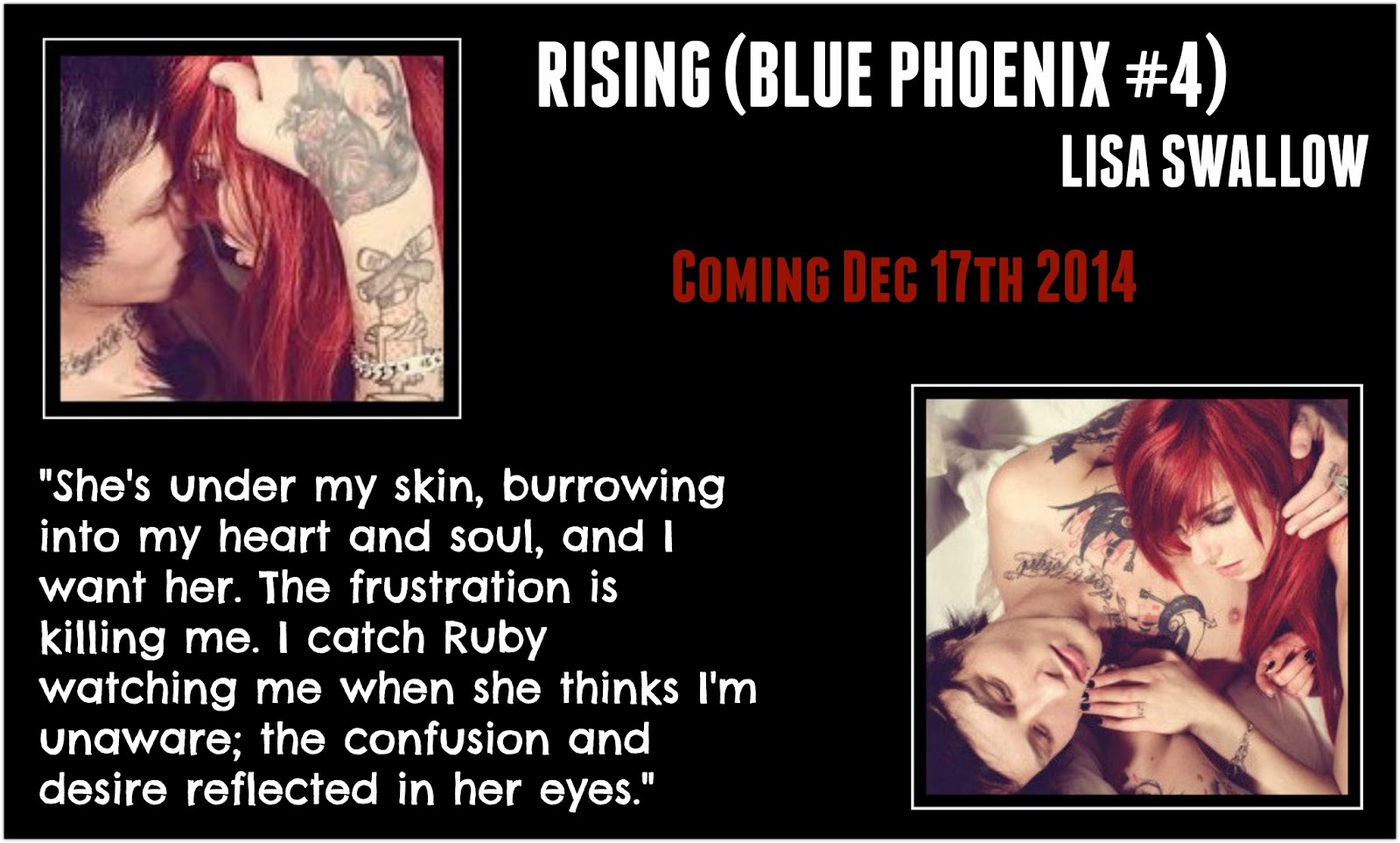 **I was given an ARC of this book, in exchange for a fair and honest review**


Posted by Louise Seraphim Reviews at 6:31 AM