Release - A Favor for a Favor - Helena Hunting 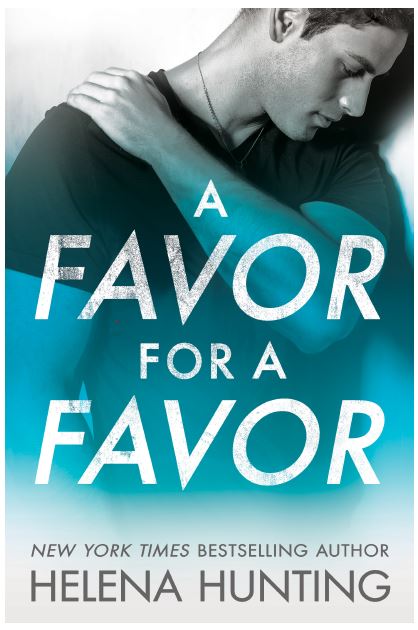 A new stand-alone romance about trading favors, battling wills, and winning love.
When I joined Seattle’s NHL expansion team, I thought it was the start of something great. But nothing ever goes the way you expect. Take my introduction to my new neighbor. She came rolling in on the hot mess express at midnight, making a racket while she tried to get into my team captain’s apartment. Did I mention that he’s married to a woman who definitely was not her?
Imagine my surprise when I end up with an injury that has me out of the game for weeks, and she’s the one to offer to help me. I should probably add that she’s not the captain’s mistress. She’s his sexy, pastel-haired younger sister.
So we come up with an arrangement: she rehabs me so that I can get back on the ice sooner, and she can add a professional athlete that isn’t her brother to her client list. Seems simple enough. As long as I can keep my hands to myself and my hormones in check.

She makes me lift my arm and drapes it over her shoulder. She’s incredibly small compared to me. She tucks one arm under my knee and gently grips the back of my calf with the other. “On the count of three,” she orders. I tense up when she hits three. She gets my leg about six inches off the floor, which is when I scream bloody murder again and grab on to her with both hands.
“Okay. That’s not going to work. The angle is too awkward.” She taps her lip and holds her finger up. “I have an idea.”
She ducks out from under my arm and hooks her fingers in the waistband of her yoga pants.
“What the hell are you doing?”
“Calm down. Some bathing suits have less coverage than my underwear. Besides, it’s nothing you haven’t seen before.”
She kicks off her yoga pants, leaving her in a T-shirt and panties. They’re plain cotton boy shorts, which should be a good thing, but apparently my body doesn’t care that it’s not a satin or lace thong. All it cares about is the proximity of almost-naked pussy.
Rook’s sister is standing in my bathroom in her underwear. If I had a sister who looked like Stevie and I knew that she was standing in one of my teammate’s bathrooms half-naked, I would probably kick the shit out of the guy. Thankfully, I have a brother.
I try to keep my eyes averted, sort of, but I catch her reflection in the vanity mirror.
She has fantastic legs. Athletic. Strong. And her ass. Goddamn. She definitely does a lot of squats, based on how round and firm it looks. The ache in my groin turns into that stabbing pain again because I’m getting hard. I think about my grandmother in a bathing suit to counteract the effect of Stevie being partly undressed.
She steps into the tub, and I force myself to keep my eyes down, bringing up the image of that hot chick in the tub who turns into a rotting old lady in The Shining. That helps a bit. At least until Stevie moves into my personal space and starts touching me again. I mutter a string of profanity, especially when I feel her boob pressed against my arm for a few seconds. I have no choice but to latch on to her shoulder as we lift my leg over the edge of the tub. I’m sweating, I’m angry, and I hate my dick.
“I need you to stop touching me!” It’s stupid because I’m still holding on to her, not the other way around.
“Why are you yelling at me?” she shouts back.
“Because you’re half-undressed in my tub, and I’m a guy, and apparently my dick is a fucking sadist. It honestly feels like my balls are on fire right now. A semi has never]  been this painful.”
“Well, close your damn eyes and think about dead things.”
“It doesn’t matter if I close them. The image of you in panties is burned into the back of my lids, probably for the rest of my fucking life. It’s all I can see.”
“You’d think you’d never seen a set of bare legs before.” She helps me lower myself into the tub and steps out.
“It’s been a long time since I’ve seen a pair up close,” I grumble.
“Such a surprise, with your warm, fuzzy personality.”