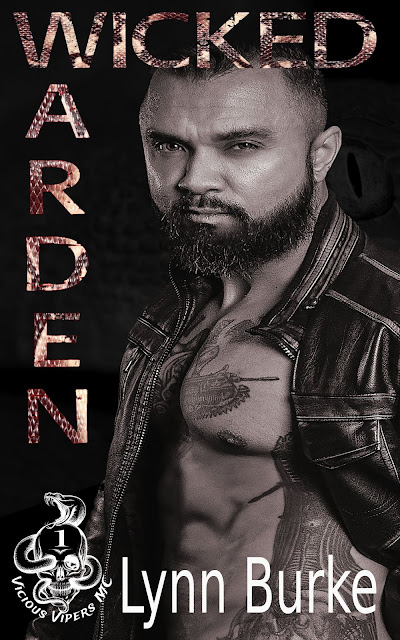 Blurb:
He’s the only man my father can trust when the cartel attempts to take us out. A vicious motorcycle gang member, he’s deadly with his fists and firearms.
He’s also the bastard responsible for my mother’s death.
I’m the one who’ll make him pay. A too-young, too-innocent woman he lusts after but refuses to touch.
He might believe he’s strong enough to withstand my plans for retaliation, but I will bring him to his knees and have my revenge.
Even if my heart dies along with his.

Wicked Warden is about a girl whose life is turned upside down once again. Thrust into a situation she doesn't want, she makes due with what she has. What if what she has is more than she thought?

There is dynamic characters, good writing, and some flaming heat in this book. I liked the book overall, but would probably not read again as it's not my particular niche. 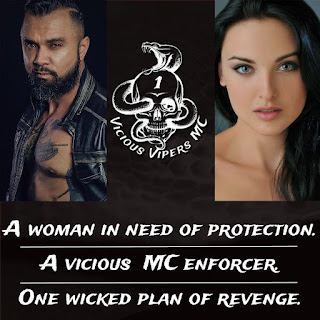 Excerpt:
“We have to go.” Dad tugged me toward the exit. “Stick to my heels—don’t look at anyone, don’t speak to anyone.”
I nodded dumbly, using my free hand to swipe tears from my cheeks in an attempt to be the strong woman he wanted. If only he’d have offered a quick hug—the thing I always longed for and never received—the fortifying sense of having firm ground to stand upon, to depend upon outside of monetary means.
“The car’s at the end of the alleyway. You’ll get in the back, lay down, and stay down until I say.”
I nodded again, knowing to never argue with Dad’s commands.
One last quick scan of my face and he turned, grasping the exit door’s handle. Dad peeked out head moving left then right. “Stay close,” he whispered, pulling the door open far enough for us to slip through.
I stepped out into the dark after him, my breath loud in my ears as cold bit at my exposed, over-heated skin. Dad’s dress shoes slapped on the sidewalk, my heels clicking as we hurried up the alleyway.
A crowd still stood at the front of the club, but Dad pushed through, people closing back in behind us as we fought to get to the car.
I kept my focus on his tense shoulders rather than scan the crowd for faces I might recognize—my guards, or his men from the compound I’d called home. Every muscle inside me trembled, shaking my limbs. The second we escaped the throng, he headed toward a tan car I didn’t recognize, his head in constant motion as he scanned the immediate area.
Dad grasped the car’s back door handle.
Pop!
“Get in!” he shouted as people began screaming behind us.
He yanked open the door, and I dove in headfirst, my heart in my throat.
Oh fuck, oh fuck, oh fuck…
I curled up on the cloth seat, hugging my knees to my chest, trembling from fear as much as the cold.
Another gunshot sounded, and Dad slammed the door behind me.
Please be okay… I clenched my eyelids shut.
A third shot sounded through the ringing in my ears, and I bit my lip to keep from shrieking, curling even tighter into myself. Tears rolled down my cheeks, and I held my breath … waiting. Needing Dad to be okay. Needing him to get in the car and take me far away from the shit.
The driver door tore open, and a quick peek revealed Dad hopping in.
“Fuck!” He pulled away from the curb like a bat out of hell, tires squealing beneath us, and I clenched my eyes shut again, trying to still my breathing and calm the fuck down. Rather than spew a million questions and distract Dad as he muttered curses and sped down one road after another, I kept quiet except for sniffles when my nose threatened to drip.
Violence came with Dad’s line of business. I’d learned that first hand, and the aftermath of that war had left me without a mother, left my father broken and shut down toward his only living relative—me.
The only daughter.
The only heir to the fortune and empire he’d built from running drugs with a cartel I wished I didn’t know anything about.
“Shaun!” Dad barked. “Get your seat belt on. Now.”
He swerved, and a car sped alongside us as I sat up. Two men sat in the front, neither of which I recognized.
The one in the passenger seat raised a gun.
“Gun!” I shrieked, and Dad slammed on the brakes.
Lower lip between my teeth, I slid out of the shoulder strap and laid back down, curling up as tight as I could.
Dad stomped on the gas again.
Metal scraped—the car shifted.
Dad cursed low and long…
We sped up. He slammed the brakes again enough to tumble me off the seat had I not had the belt across my lap. More speed, more metal screeching—tears and snot mingled on my face, but I couldn’t be bothered to care.
I’d always thought keeping my eyes closed as a child meant no one could see me, that I hid in my own little world. Untouchable. Invincible.
I’d learned the day Mom died, the closing of one’s eyes couldn’t shield one from the horrors in life.
The car suddenly shifted—spun.
I bit my lip, tasting blood as I whimpered.
Sounds of screeching—metal smashing—a loud explosion.
Our car came to a standstill, silence engulfing the air around us.

Author Bio:
Lynn Burke is a full time mother, voracious gardener, and scribbler of spicy romance stories. A country bumpkin turned Bay Stater, she enjoys her chowdah and Dunkin Donuts when not trying to escape the reality of city life.