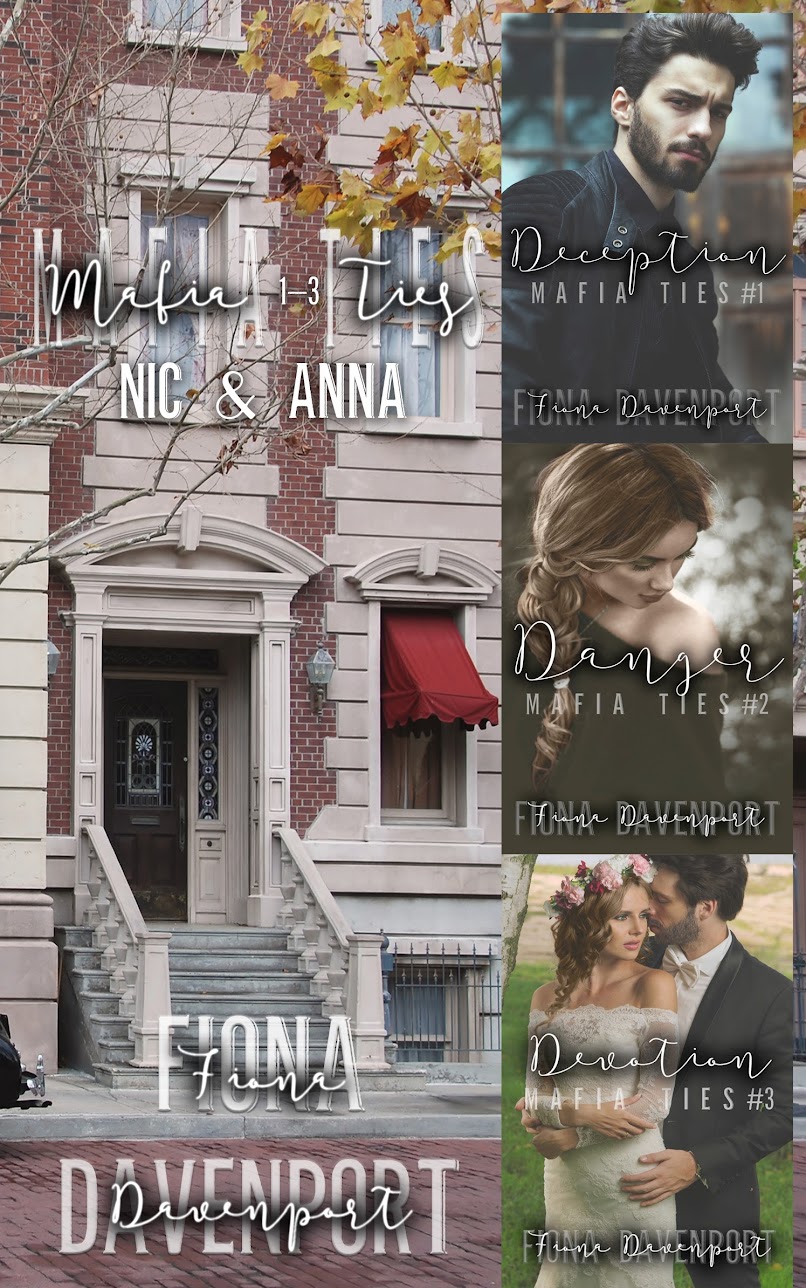 BLURB:
A smokin' hot dad falls for the innocent nanny... and he's a Mafia boss.

Deception: Nic DeLuca is used to taking what he wants. Born to lead a powerful mafia family, he’s not in the habit of asking for permission—or forgiveness. He’s willing to cross any boundary when it comes to possessing what he considers to be his, and from the moment he laid eyes on Anna Martin, he knew she was meant for him.

Nic is quick to move the innocent nanny into his home... and his bed. But, he hides his dark side from Anna. The deception is necessary to ensure she falls for him before she realizes exactly who he is.

Danger: Anna Martin was looking for a nanny position, but she found more than she bargained for when she fell for single dad Nic DeLuca. When she finds out he’s a mafia boss, her head tells her to run but her heart tells her to stay. With his baby girl in the hospital, Anna stands by her man in his time of need. But when danger swirls around them, will they manage to find happiness together?

Devotion: It didn’t take long for Nic DeLuca and Anna Martin to fall in love. The mafia boss and innocent nanny may seem like an odd match, but their devotion to each other is absolute.

When Anna is taken by a rival family, Nic will go to any lengths to rescue her—and ensure nobody touches what’s his ever again. 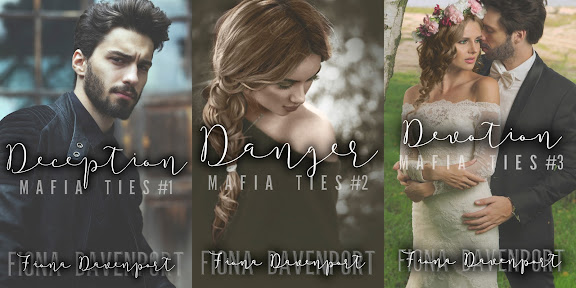 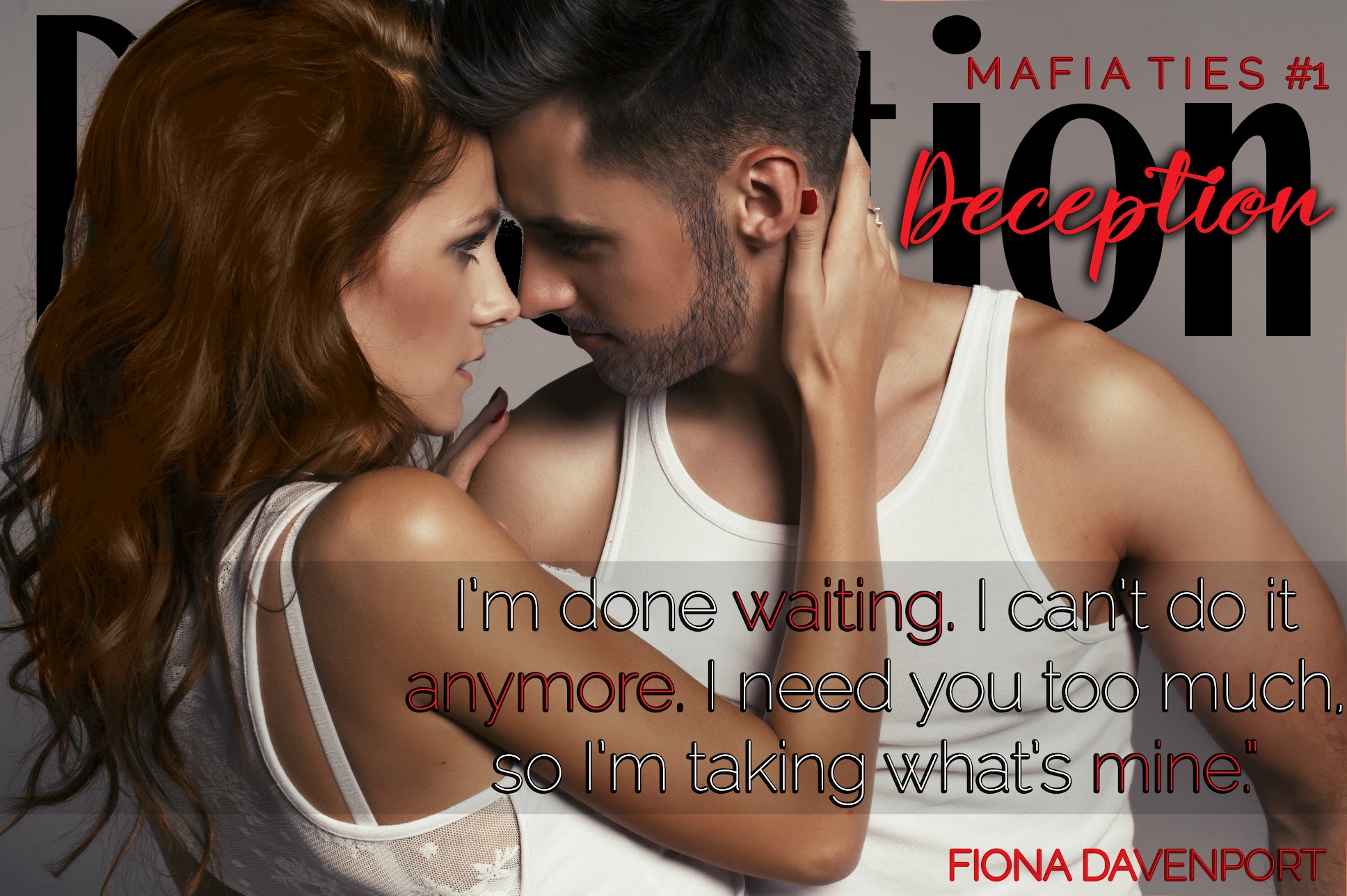 I’d been kissed before. Or at least I thought I had, right up until the moment Nic DeLuca’s mouth claimed mine. There was none of the usual awkwardness of a first kiss. No chance for me to wonder how I should hold my head, if I tasted like the strawberry lip balm I’d put on earlier, or if I should part my lips. As soon as his lush lips met mine, I gasped in surprise and he took control. Head slanted to the right, his tongue swept inside to tangle with mine. His fingers dug into my waist, tugging me flush against his body and proving exactly how much he was enjoying our kiss when I felt his hard length hot against my stomach. By the time he pulled away to nibble on my lips, I could barely see straight, let alone stand by myself without him keeping me upright. The pecks I’d received had been from boys, but Nic DeLuca was no boy—he was all man.
Once I’d steadied myself, one of his hands slid from my waist down to the hem of my skirt. I shivered when he slid it up my thigh, the heat from his palm searing my skin. “Given more time, I could come to appreciate your choice of skirt, but my daughter is waiting for us in the kitchen.”
His daughter, who I’d come to meet and promptly forgotten about when he’d gotten his lips on me. “Crapballs.”
His deep chuckle made me aware I’d said that aloud and not just in my head. I felt the heat of a blush climb up my neck to my face. He swiped his thumb across my cheekbone as he stared down at me. “Such innocence,” he sighed. “It’s almost a shame you found your way to my door.” 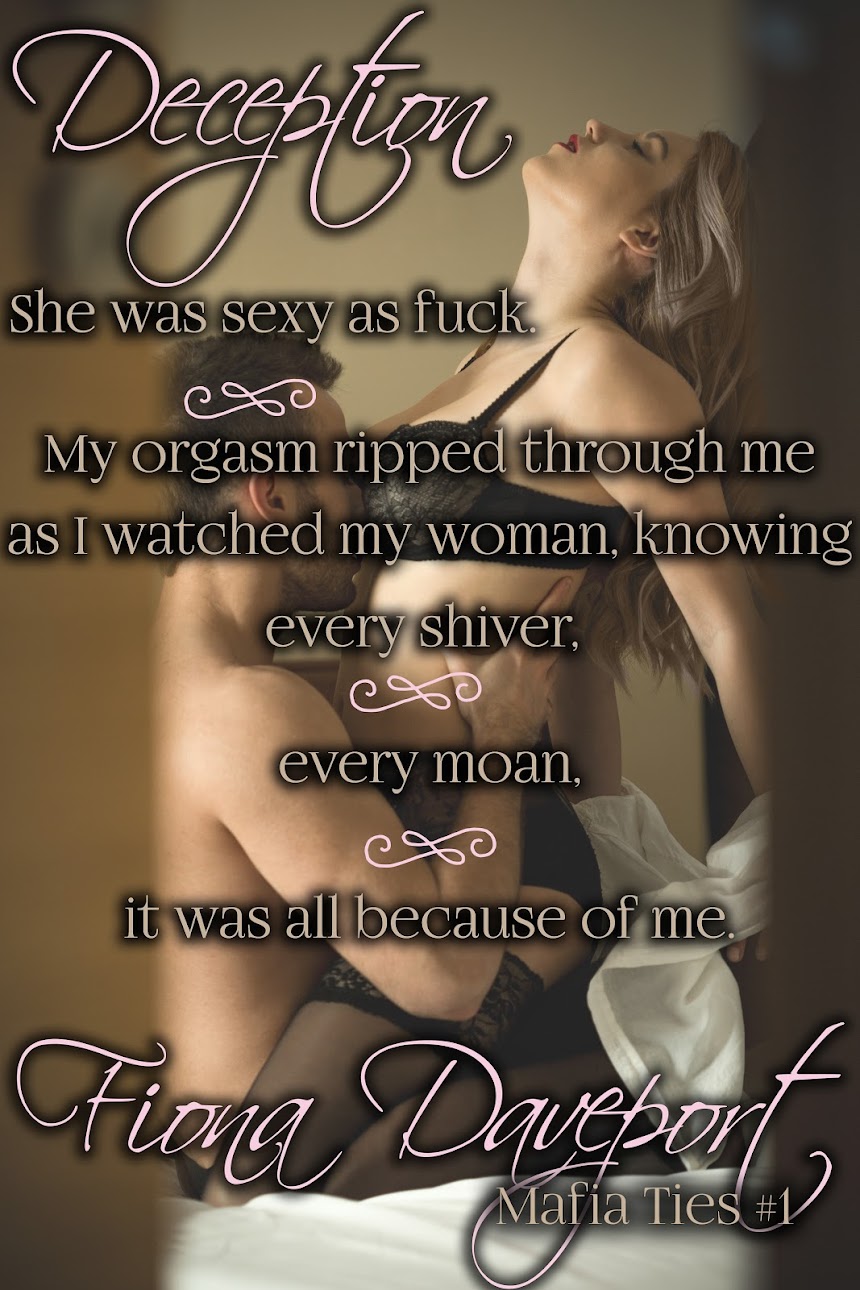 Damn, the girl was fast. But Nic was just as quick, because I found myself lifted off my feet, carried into the house, and placed onto the couch in the living room, in what felt like the blink of an eye.
He sat down next to me, leaning over, his face close to mine. "We need to talk." I pushed against his chest, trying to get out from under him, my mind a jumbled mess after everything I'd just heard. What I'd just learned about him. My Nic was a mobster. It was almost impossible to believe. He was into bad stuff, illegal stuff. Things about which I had zero clue because he'd kept me in the dark.
"We'll talk," he promised, his hand sliding under my robe and up my inner thigh. "After."
"After?" I stuttered, my breath hitching when he sank two fingers inside me.
"After you come on my hand, in my mouth, and on my cock."
I pushed against his chest again, even as my legs widened slightly, giving him better access to my body. "I'm angry with you, Nic. And hurt. And a little scared."
He stilled over me, staring down at me with pain filled eyes. "I will never hurt you, mia dolce. Never."
It was a heartfelt vow, and I believed him. It might make me the most naïve person on the planet, but I knew deep in my bones that Nic didn't mean me any harm.
"I know," I whispered softly, one hand sliding up his chest to cup his cheek. "But I'm still unbelievably angry with you."
"Then take your anger out on my body, Gianna, and let me show you exactly how sorry I am." 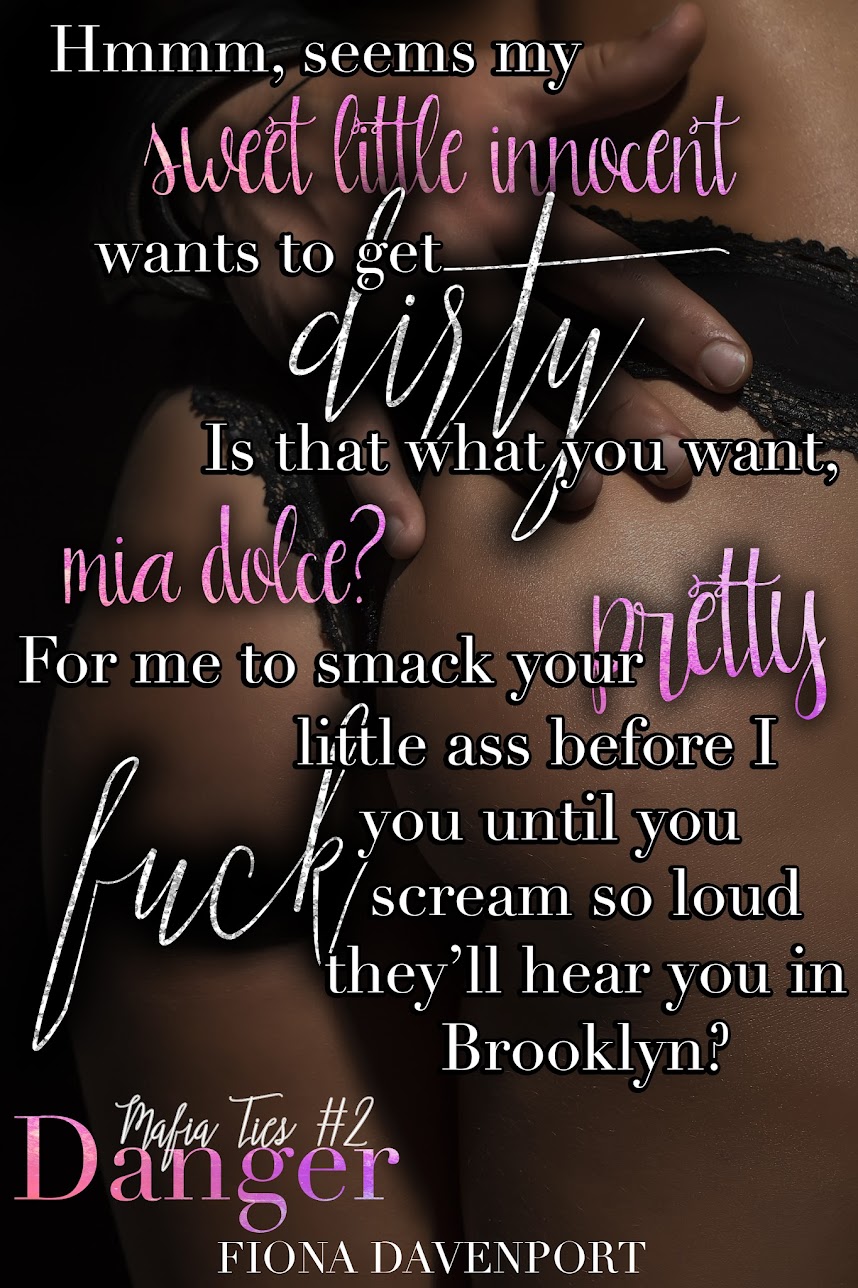 Completely sated, I sagged against him, my arms wrapped around his shoulders.
“I needed that,” I sighed against his neck.
“I did too,” he murmured. “So damn much.”
It eased some of my feminine pique, hearing him admit he’d been denying himself as much as he’d denied me. Oddly enough, it had never crossed my mind that he didn’t want me. But, it hadn’t stopped me from being a little hurt when he kept resisting my advances.
“Then maybe we should go again.”
I felt his chest shake with laughter before I heard it. “My girl is greedy.”
I tilted my head and looked up at him, giving him my best pout. “Only because you denied me for so long.”
His thumb swept across my bottom lip. “It was for your own damn good, and you know it.”
“I know why you did it,” I whispered. “But now that I’ve proven I’m more than capable of taking what you can dish out, don’t you think I’ve earned more of it?”
“Mannaggia,” he hissed. “I don’t have it in me to deny either one of us any longer.”
“Good,” I said, flashing him a smug grin.
His hands tightened on my waist, and he lifted me off his lap, rising to his feet. He carried me to the couch, gently laying me down, and following until he hovered over me. “You might have been the one to start this, but don’t for one second forget which one of us is in charge here.”
My breath caught in my chest at the hint of command in his tone. “You’re the boss.” 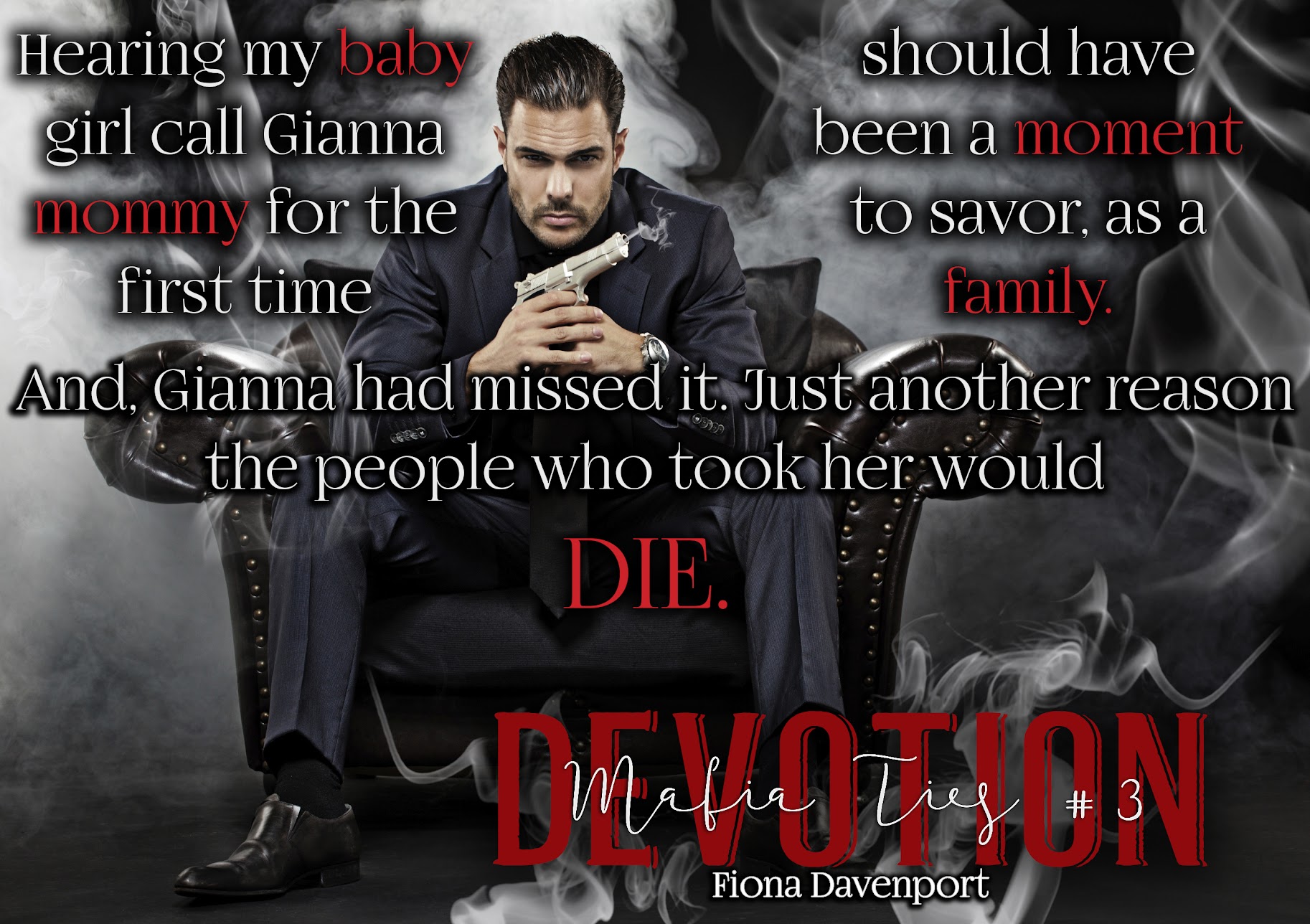 OTHER BOOKS BY FIONA DAVENPORT
**All books available on Kindle Unlimited**

Hello! My name is Fiona Davenport and I'm a smutoholic. I've been reading raunchy romance novels since... well, forever and a day ago it seems. And now I get to write sexy stories and share them with others who are like me and enjoy their books on the steamier side. Fiona Davenport is my super-secret alias, which is kind of awesome since I've always wanted one.
AUTHOR LINKS:
Facebook │ Twitter │ Pinterest │ Instagram │ Goodreads
Posted by ShutUpShabby at 2:11 PM