Release + Review - I'd Rather Not - Lani Lynn Vale 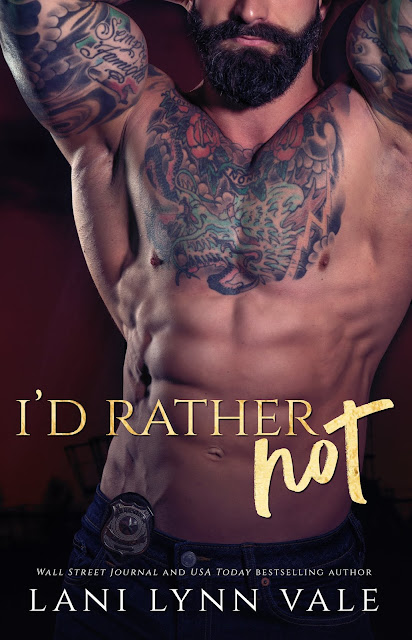 She only has weeks to live thanks to a freak infection that totally and completely destroyed her kidneys.

Despite her family’s desperation, not a single one of them is a match.

In a last-ditch attempt, Oakley’s father takes to social media to beg for help to save his daughter’s life.
***

Pace Vineyard is lost. So lost, in fact, that he’s not sure he wants to be found.

But then a beautiful woman’s face is splashed across social media, and Pace finds a spark in his soul for the first time since a bomb went off beside him.

At least, that’s what he tells himself.

What he doesn’t expect is to give his heart to the woman, too. Or for the woman to run away with it and force him to follow.

Lani Lynn Vale is a USA Today Bestselling Author of over thirty titles. She is married with three children, two dogs, two cats, a donkey, and a couple (a couple also meaning over twenty) chickens.
When she’s not writing, you can find her curled up in her favorite chair reading.
Lani is married with three children and lives in the Great State of Texas.

Vale has a way of weaving us a story that sucks you in from the first page. I loved everything about Oakley and Pace. The way they were tied together from the start without actually knowing each other. The way they fell hard and fast. Add in the secondary characters and I was sold. One thing is for sure if you one-click I’d Rather Not you won’t regret it.

Pace’s life didn’t start off as a good one, but he turned his life around. He cut out the negative people as much as he could. He served his country and was injured in doing so. But he didn’t let that stop him he kept pushing to be better than before. He had heard about his best friend Ford’s sister for years and felt something for her every time her name was brought up. And when scrolling through social media he finds that she needs he help he can’t help but step up. He’s not just giving her life, but his heart at the same time.

Oakley never thought about what she wanted to do in so many years’ time. But death does funny things to you. When she finds out one of her brother’s old military brothers is willing to give her a second shot, she can’t help but be grateful. Even when he’s given so much to those around him. The thing about Pace though is she can she herself giving him everything in return as well. The question is will she be around long enough to give him everything she can?