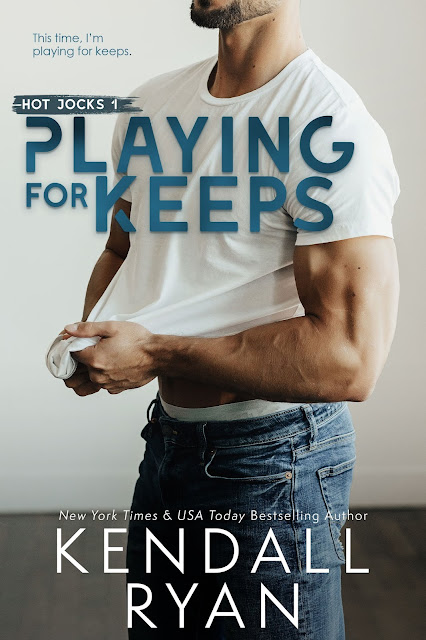 I've never been so stupid in my entire life.

Elise Parrish, my teammate's incredibly sweet and gorgeous younger sister, should have been off-limits, but my hockey stick didn't get the memo.

After our team won the championship, our flirting turned physical, and I took her to bed. Then shame sent her running the next morning from our catastrophic mistake.

She thinks I don't remember that night - but every detail is burned into my brain so deeply, I'll never forget. The feel of her in my arms, the soft whimpers of pleasure I coaxed from her perfect lips....

And now I've spent three months trying to get her out of my head, but I'm starting to understand she's the only girl I'll ever want.

I have one shot to show her I can be exactly what she needs, but Elise won't be easily convinced.

That's okay, because I'm good under pressure, and this time, I'm playing for keeps.

Get ready to meet your new favorite hot jocks in an all new series of stand-alone novels. If you like sexy, confident men who know how to handle a stick (on and off the ice), and smart women who are strong enough to keep all those big egos in check, this series of athlete romances is perfect for you!
Amazon ➜ https://amzn.to/2GWFZGj
Apple ➜ https://apple.co/2GSV4tv
Nook ➜ http://bit.ly/2LgEVSM
Kobo ➜ http://bit.ly/2UKjVU4
Audible ➜ https://adbl.co/2PH4ona

A New York Times, Wall Street Journal, and USA Today bestselling author of more than three dozen titles, Kendall Ryan has sold over 2.5 million books and her books have been translated into several languages in countries around the world.
Her books have also appeared on the New York Times and USA Today bestseller lists more than 70 times. Ryan has been featured in such publications as USA Today, Newsweek, and InTouch Magazine. 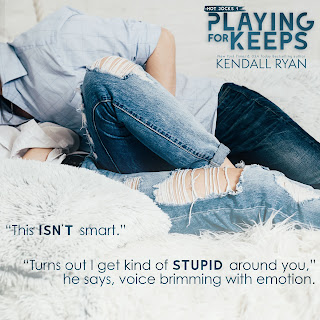 Playing for Keeps is book 1 in the ‘Hot Jocks’ series and by far one of the best Hockey books that I have read which includes the story line of falling for your best friends’ sister which is a favourite of mine.


Justin and Elise have known each other forever, they have never gone beyond friends but when one night together sends Elise into panic, Justin brushes the night off not admitting he remembers every minute of it. Wanting nothing more than everything with Elise, Justin has broken the bro code; will he give up the love of his life to keep his best friend or can he have both?

Justin and Elise have amazing chemistry that is off the charts and they cannot stay away from each other. I personally really enjoyed Playing for Keeps, Ryan has yet again delivered an amazing book and started off the series perfectly.

I cannot wait to get my hands on book 2 of the ‘Hot Jocks’ series.

“Getting the girl, 5 stars”

I love hockey stories. I love a best friends sibling love story. Playing for Keeps has both so obviously it was a one-click for me. Ryan gave us the perfect balance of hockey and love story. She made us fall in love with the characters and cheer them on. I don’t have a bad thing to say about Playing for Keeps. I cannot wait to see where Ryan takes the rest of the Hot Jocks series.

Justin and Elise have known each other forever. Justin is Elise’s brother’s best friend and teammate. She’s always wanted him but he’s so far outside of her league she never saw it happening. Then one day it changes. Justin seems to want her as much as she wants him, but can they really be together?

Justin is over the whole playboy hockey-pro life style. He wants to…settle down? One thing is for sure he wants Elise. Even though it goes against every bro-code rule. The question is does he care? Will he be able to convince Elise he’s playing for keeps?