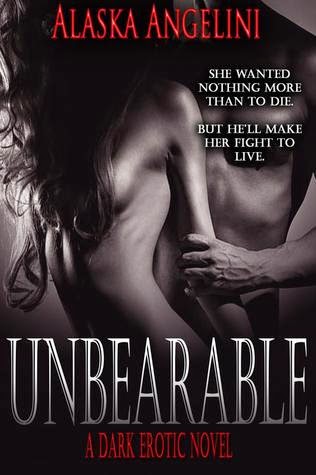 It is incredibly satisfying to read a book that is totally new and different to me. The synopsis sounded intriguing and after reading quite a few books in this genre lately, it looked to be a bit different. Which made it even more interesting.

Diane is a woman in pain. She has lost everything in her life that means anything to her, and she doesn't feel she has anything left worth living for. After unsuccessful attempts at suicide, Diane is told about 'Master', a man who will help those seeking death. Before Diane even has the chance to think about it, she is taken to him.

A dark and sprawling mansion, in the middle of nowhere, is looming in front of Diane. She is taken in and has no idea that she can not leave.
It's here that Diane meets the man known as 'Master'. He is gorgeous and powerful and not at all what Diane was expecting.

It's here that Master has a plan, a routine. He can make those seeking death, regain the will to live again. To want a life worth living. Yet, it's how he goes about bringing back that will, that is quite shocking and unusual. He will become their Master, and they will do exactly as they are told. He will break them down, to build them back up again, reborn and compliant. Through their pain, they learn not to desire death anymore, they want to live and not be afraid.

It's all a little confusing in a way, not exactly what you would think would work. Yet Master has a success rate and nobody under his care and attention, ends up taking their own life.
Like I said, the story was unique and totally different from anything I had read before. Making it a really good read. It was very dark and had a lot of very sensitive subject matter.

The main characters, Diane and Master were both characters that had been through some extremely traumatic ordeals in their lives. This unconventional life style and tactic ends up being what essentially saves the both of them. Diane is surprisingly a very strong character. She has been through the very worse that could happen to her, and she still ends up fighting for her life. It just takes her a while to get there.

There is also some very hot and shocking scenes in this book, for those who love their books dark and risky. This book likes to dance around the hard limit lines, but it does it beautifully. Just like the writing style. This book was incredibly well written and painted a dark and shocking picture that could also be seen as beautiful and a tale of love at it's hardest.

I thoroughly enjoyed this book and as a new reader of author Alaska Angelini, I am pleased to see she has a huge amount of books for me to go explore.
This book will shock and stay in your mind for a long time after reading, but it was unique and enthralling, and showed a very dark version of a love story.

**I was given a copy of this book in exchange for a fair and honest review**
Posted by Louise Seraphim Reviews at 10:09 AM