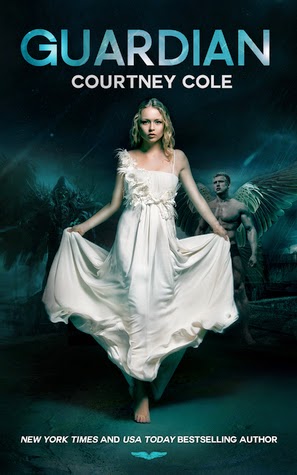 This is the first Young Adult Paranormal book I have read in ages, I haven't read any good ones for quite some time, so I haven't really been looking for any new ones lately.
Then I was asked to read Guardian and straight away, I knew it was going to be good and exactly what I had been missing.
Whitney, has had a rough time lately. Her father passed away, saving a boy from drowning. Weeks later she is still trying to come to terms with losing him whilst looking after her little sister, as her mum seems to be having a breakdown. She has retreated in to her own mind, and Whitney has the worry of her sister and herself being split up, and put in foster care if she asks for help. So she gets through every day the best way she can, surviving. Oh and she has only just turned 16!
On top of all this, Whitney thinks she is going crazy. She is seeing things that she isn't sure are there, and feels certain things around her, even touching her. She isn't sure whether she is imaging them, although they seem so real. Yet with the stress she is under and how much her fathers death has effected her, she puts it down to her going mad.
Just when everything was at it's worse, in walks Brady. He is gorgeous, perfect and is obviously totally hooked on Whitney. He actually seems a little too good to be true. She even starts dreaming about him, dreams that seem eerily real.
It's at this time she also meets another new face, Carter. Dark and brooding swimmer Carter, who doesn't seem to take to Whitney all that well. Although they don't know each other, she still feels curious about what it is that bugs him. Whether she has done something wrong. So two new gorgeous faces around, yet the things that Whitney is seeing and feeling are getting worse. Far more frequent and feeling more real than ever. Also it would seem her mother is getting worse too. Her condition is getting far more scarier and Whitney needs help. She finally decides to call her grandparents, who get on the first plane to come stay with her.
Without giving away all the big secrets and twists within this fantastic story, I can't say a great deal more.
What I can say is, there was some fantastic twists and turns that left me shocked yet excited. Things that I didn't see coming. Which made this story quite unique. Sometimes, it can be hard to find something different within the paranormal genre, a lot of subjects get rehashed and re twisted and not always for the best. I was really impressed and surprised at where this story went. It was different and intriguing and I was hooked throughout the entire book. It was so good to get back into paranormal books again with something new and captivating.
Whitney was a fantastic main character, although she was a lot younger than any mc's I have read about lately and I must admit, I did worry if I would be able to get into it again, after reading so many adult age books lately. Yet, I really had no worries. After everything that happened to her, she was far older than her 16 years. She had been forced to grow up and didn't seem like 16 at all. All the other supporting characters were equally as exciting and enjoyable.
The writing was fantastic, I loved how addicted I felt to everything within this story right from the first few pages. I was captivated by the writing style and enjoyed the feeling of being glued to the pages again.
A fantastic paranormal tale that will have you gripped from the start, and left questioning lots of things long after your finished.
4.5 stars!


**I was given an ARC of this book in exchange for a fair and honest review**
Posted by Louise Seraphim Reviews at 10:40 AM