In this dirty, bloody world we live in, the answers to prayers aren't always pretty angels.

Retaken by human traffickers, Jazmine's one hope is ex-cop, ex-mercenary, Pieter, a man with a glower that stops lesser men in their tracks.

She prays he can save her.

But this savior is far from perfect and his flaws may prove as devastating to Jazmine as the torture of her captors.


The fire of dominance never dies.


ADD to GOODREADS - Seize me From Darkness (Pierced Hearts, #4) 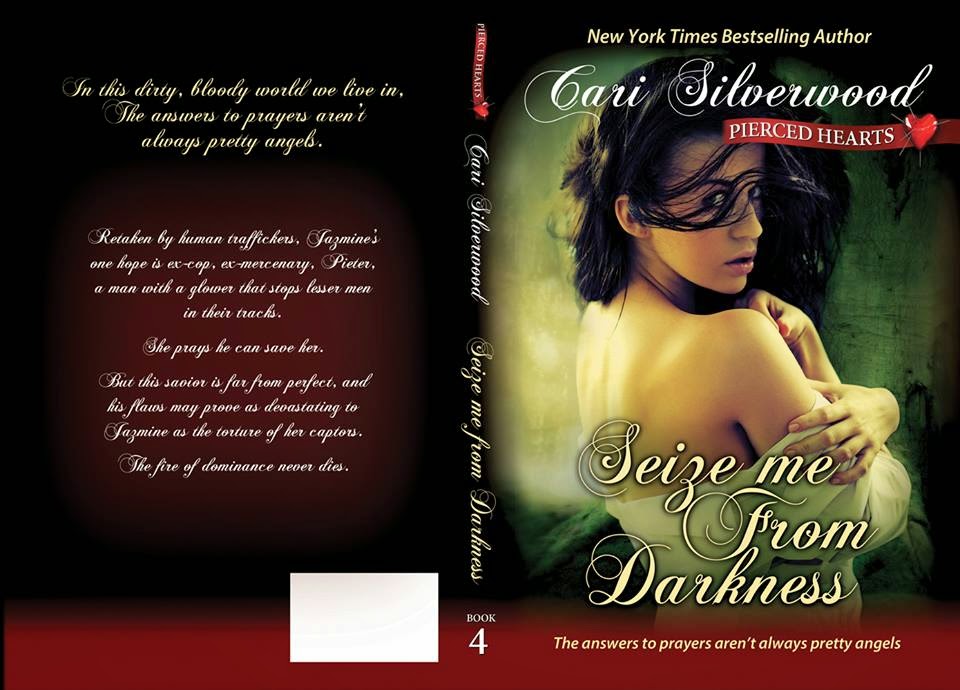 Desire rippled into me, and I shivered for a full second. Visibly shivered. His threat had done that. Since when had I been into pain?
“You like that?” His eyebrow arched. “You like the threat of pain?”
“No.” My denial was automatic, but I couldn’t stop the tiny swallow that followed. He’d figured me out before I did.
His thumb swept across to my mouth then he curled out my lip as if checking the teeth of a bought creature.
Awareness blossomed in his eyes, a smug satisfaction that half made me want to wipe it away. But the other half of me wanted to do anything he asked.
“Liar,” he murmured, stretching out my nipple, eliciting another gasp. “Pretty liars get hurt anyway. Say thank you.”
My eyes widened. Then he shifted his hand, hooked two fingers into my mouth, and leaned that elbow on the wall behind my head. “Say thank you.”
I wriggled in his grip.
“Say thank you.”
“No, no –”
His fingers hooked deeper in, brushing my tongue. I was crushed, desire annihilating thought. My thank you tumbled out. Tears leaked and dribbled down my cheeks. This was insane.
He pulled his hand from my mouth and held my throat to the wall while he shoved his other hand between my legs, fingers curving along in my moisture and making me part my legs. Then he lifted me an inch or so. My back slid on tile, rekindling pain. I was pinned there, throat and pussy. A needy moan escaped my lips.

Cari Silverwood is a New York Times and USA Today bestselling writer of kinky darkness or sometimes of dark kinkiness, depending on her moods and the amount of time she's spent staring into the night. She has an ornery nature as well as a lethal curiosity that makes her want to upend plots and see what falls out when you shake them.

When others are writing bad men doing bad things you may find her writing good men who accidentally on purpose fall into the abyss and come out with their morals twisted in knots.

This might be because she comes from the land down under, Australia, or it could be her excessive consumption of wine.

Freaking out readers is her first love and her second love is freaking out the people living in her books. Her favorite hobby is convincing people she has a basement...though she really doesn’t. Promise. If it existed it would be a terrifying place where you would find all the dangerous things that you never knew you craved.

To escape you'd need to get the key you can see through the grate in your cell door. A key that’s hanging from the ceiling by string. The light above is flickering on...off...and you can hear feet dragging along the corridor floor. Your door is locked.

Anyone know how to get blood stains out of concrete?

My website, if you're curious about my other evil pursuits: http://www.carisilverwood.net/


Make Me Yours Evermore (Pierced Hearts, #3)

This book was definitely addictive reading. Not for the faint hearted of course. ;)So although this book was book 4 in the Pierced Heart series, I heard that it could be read as a standalone. As I hadn't read any of the others in the series, and loved the synopsis I thought I would give it a go.So, the story starts straight in to the action. No build up or summarising. It actually almost felt like I had missed a story before, which I had, but apparently that wasn't Jazmine & Pieter's story, they were just in the story. So I was a little thrown at first. Almost wishing I had read the one before. But after a while I picked it up easily enough and got stuck in to it. Jazmine, a freelance journalist, was captured for the Client. Somebody wanted Jazmine to suffer and went to great extremes to make sure she did. Which meant she was now being tortured, and abused regularly. Locked up in a cell and only allowed out once a week, to take part in a scene. This scene had to be set to a certain standard. Each one had to be made harder and more painful each time. All this was done in front of the Client, somebody she couldn't see, but obviously he was watching her, suffer. Pieter, an ex cop and mercenary had been on the job, working for the man who had captured these slaves. He went on to attempt to rescue Jazmine, and obviously failed. This part was in the previous book, so I can only go by what is said about before. When we see Pieter, he has been captured, beaten and told he had a new job, in place of his death. He has gone from attempting to free Jazmine, to now being her torturer. He would be part of the scenes. Meaning he did what he was told, or she would suffer a worst fate at the hands of guards and Gregor and he would be most likely killed. Through their forced roles, we learn that Pieter is actually quite the sadist and loves his role a little too much. Also, that Jazmine enjoys it a great deal. So the scenes are quite the test of limits. They start off quite tame but end up in new boundaries. When locked up in the cell, Jazmine is told Pieter will be her new cell mate. So the 2 of them are together 24/7 and learn quite a lot about themselves and each other. I can't really summarise anymore as there is far too much that could be given away. The book takes a different turn at one point and it's quite surprising. This book is never dull or boring. It's full on action oozing out of every page. Plenty of shockers too for those who love to see how far the book will go. Jazmine went through a massive change. It was quite intriguing to watch her make this change. I always love to read books where there is a challenge, I think Jazmine was quite the challenge. She started off quite cunning and feisty yet changed into a perfect submissive. Pieter also had quite a turnaround. I started off feeling one way about him, then I couldn't decide how i felt. He was obviously alive through his dominant side. They went on quite a dark and disturbing journey together, and came out of it in their own little HEA. A very dark and twisted romance, that had me totally hooked to every little twist and turn. Incredibly entertaining. If you like the darker stuff, this is perfection. I should make a point of saying, this book has a huge amount of sensitive subject matter. So go in to it knowing it's not your everyday regular romance. If you like it dark, go get this!

Posted by Louise Seraphim Reviews at 6:54 AM