REVIEW - Drawn to You - Ker Dukey

Antonia McNally has a great family, a great boyfriend, and a great future… until she finds herself interrupting a robbery and becoming the victim of a ruthless criminal. When she witnesses brutal murder, abuse and suffers her own traumatizing assault by his hand, her life changes forever. When love, loyalty, and strength are tested, the weak falter.
Moving away to the States offers her a fresh start; however, confident, successful Finlay Hayes, her best friend’s Brother adds even more chaos to her already turbulent emotions. When she can’t decide between ripping him a new one or ripping his clothes off, one thing is for sure, they both have an unquenchable craving for each other. When life starts looking a little brighter it’s not long before the storm clouds roll in. All is never what it appears and under his good looks and in charge attitude, Finlay has a past of his own and secrets that can destroy the dynamics of the friendships she has built.
Secrets are waiting to be spilled, but at what cost?

Warning, this is book 1 of 2. This is a new adult romance which contains explicit sex - 18's only.


I'm still torn on my opinion on this one.

Considering I am a huge fan of darker reads, and it seems to be my go-to genre of choice at the moment. I think I possibly made a mistake by choosing Drawn to You as my first read, of an Author well known and loved for darker reads, Ker Dukey.

I knew this was NA, and a lot more lighter than what she normally writes, and thought maybe if I liked this, I would be raring to go, on her darker stuff. Plus, have you seen that cover??!!!
But, I think maybe I'm in a reading slump on NA. I can't seem to get as addicted to it, as I once did.

Anyway, so Drawn to You is about Antonia, a girl who has experienced a traumatic life event, that changed her significantly. She became withdrawn, and lost her friends and boyfriend, and had pretty much secluded herself away from everything.
The opportunity for a fresh start comes up. She decides to switch schools, and go to America (from the UK) and she is staying with her friend from her teen years, from when she used to live in the US. So she has someone there for her, until her own apartment is ready.

Antonia meets up with her friend, and gets settled. But within no time at all, she is meeting Finlay, her friend Gaby's brother. They live together, when he is around, and since their father passed away recently, he has taken on his father's company, and the role of watching over his sister.
He is absolutely gorgeous, and totally rude and obnoxious. But of course that is hot as hell, and the chemistry between them is unbelievable. Seriously, mentally hot chemistry. He is addictive, and has this rough, and edgy attitude that makes him completely desirable. He totally bosses Gaby and Antonia around, but he so can, he rocks the control vibe.

So this was all great, and I was loving it. But, then it started to change. Like everything happened too soon. Antonia and Finlay became a couple, which was obviously going to happen, there was no way it couldn't, BUT it happened so fast, and I missed all the crazy chemistry and atmosphere between them. Once they admitted they wanted each other, and settled in to some sort of relationship, I kind of lost interest.
The story chugged along, and we learnt more about Antonia's past (quite early on) and secrets between all the friends, which I must point out, there was A LOT of friends. The secondary characters, kinda made my head hurt, there was so many of them. I couldn't keep track. But some of them were fun, and made me laugh so they were worth it.

So I felt like perhaps a third of the book, wasn't really anything significant, more about developing characters and relationships, but I always felt like something was around the corner, or something big was going to happen. There was this atmosphere, like waiting for the other shoe to drop, kind of atmosphere, things were too easy and too settled, even with the odd temper tantrum, and fight. It was still all too chilled out. Calm before the storm.

So I guess that's where the last 20% kicked in. And that was a WOW!! moment. Everything happened all at once, and left me with my mouth gaping. A huge amount of twists and reveals, and they were pretty epic ones too. Plus I obviously hadn't read up properly so didn't realise it was 1 of 2, and there is a sorta cliff hanger at the end. Although it's not a total one, things are somewhat explained before hand.

So I guess if I could combine the beginning and the end, and shake up the middle, this would of been an epic read. But I always felt like something was missing, or waiting to happen. Finlay and Antonia fell into a relationship and love wayyyy too quick. I think their early days could of been dragged out more, and given us some more of those epic chemistry scenes.

So am I going to read the next book? Hmm yes probably. I can't say for sure, but I did like where it was heading, and I do want to know the outcome of all that went down. The characters were well done, and I'm dying to know how the new situations will be handled. So if you want a read that is pretty easy going, and not too heavy, with plenty of steam, and twists, then this is a good read for you. 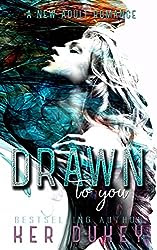 Posted by Anonymous at 9:13 AM