Have you met the Storm MC yet? 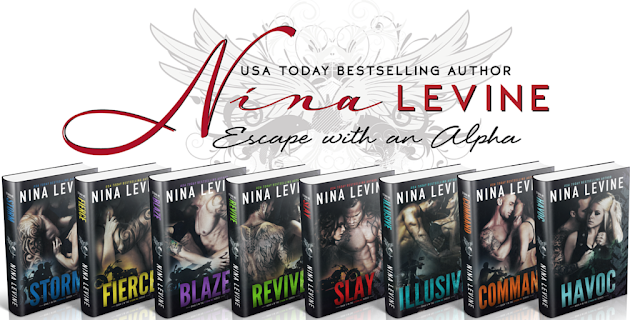 If you love a dirty talking, alpha biker this bestselling series is one you should
check out today! (http://ninalevinebooks.com/my-books/storm-mc-series-3/) 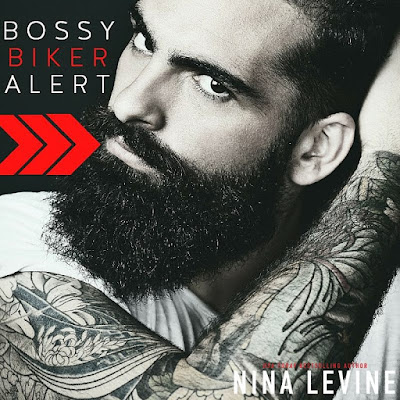 Nina Levine will be releasing the next book in the series on the 8th March, so now is the perfect time to get started with the Storm men.

START THE SERIES FOR FREE TODAY 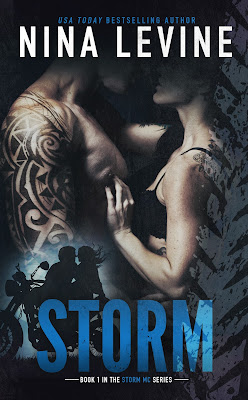 Havoc will be out on the 8th March. 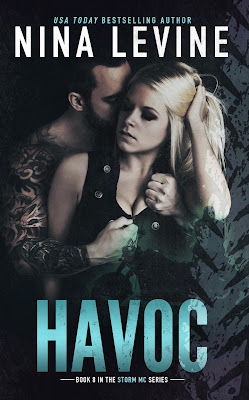 While this is the eighth book in the series it has been written as a stand-alone so new-to-the-series readers can read and enjoy it without having read the other books.

As I stepped through the bathroom doorway however, I found her. She was in the bath, plugged into her music with her eyes closed and her head resting on the edge of the bath. I stopped and leaned against the wall with my arms folded across my chest. Watching her, my gaze travelled the length of her body. In the short time I’d known her, my appreciation of her body had grown. Where small tits hadn’t turned me on a month ago, I couldn’t get enough of hers. Never letting me down, my dick grew hard while I took in her beauty.
“Fuck,”
I muttered under my breath as I contemplated the wisdom of fucking her again. I wanted to. Hell, I fucking needed to. She’s a brother’s sister for fuck’s sake. I’d spent the last few hours going over and over that fact in my mind. My decision had been to head back to the motel, sleep on the couch and never taste her pussy again. I hadn’t factored in having her naked body on display the minute I returned.
Shit.
“How long are you going to stand there staring at me?”
she asked as she cracked an eye open to look at me.
“Until you get out and let me fuck you.”
Both her eyes had opened and I pinned my gaze to hers, not letting her go. Her eyebrows lifted.
“I thought you were done with me.”
“Turns out I’m not.”
She stood and reached for her towel before stepping out. Continuing to hold my gaze, she slowly dried herself off. Teasing the fuck out of my dick.
I fought the desire to reach out and rip the towel from her hands. My carefully constructed self-control was being tested and I knew it wouldn’t be long until I caved and took what I wanted.
Finally – finally – she finished drying off and closed the distance between us. “What if I’m done with you?”
I knew she was full of shit by the breathless tone she used and the way her body leaned just that little bit too close to mine. It was like she was trying to hold herself back, but her body had a mind of its own and couldn’t stay away. I lifted a brow.
“Are you?”
“I should be. After the way you’ve been treating me, I really should be.”
Still all breathy. Still in this with me. I unfolded my arms so I could curl my hand around her neck. Gripping her there, I said,
“Yeah, you should be, but you’re not.”
I feel the same way. With our faces so close that her breaths whispered across my skin, we stared at each other for a long time. The still air in the tiny bathroom consumed our apprehension piece by piece until all that was left was an unrelenting need to satisfy our hunger.
At the first sign of her softening, I tightened my hold on her neck and pulled her mouth to mine. She didn’t hesitate and a second later our bodies pressed together as hard as our mouths did.
The smell of her arousal overwhelmed me and I let her neck go so I could slide my hands around her ass and lift her. Turning, I held her up against the wall and groaned as she wrapped her legs around me. The urge to drive my cock as hard and fast as I could into her sweet cunt threatened to take over as the only thought in my mind, and I took a moment to work through that and get myself under control.
Resting my forehead against hers, I focused on my breathing while I gave myself a talking to. Focus.
You’ve got this.
You’ve fucking done this enough times to know how to control yourself.
But I hadn’t.
I’d never fucked a woman like Carla. Had never been with a woman who stole my control the way she did. She invaded every fucking sense of mine until I didn’t know right from wrong, up from down, red from fucking blue.
“Havoc.”
My head snapped up and I found her staring at me.
Unsure.
“Are you okay?”
she asked, lines creasing her forehead as she tilted her head, frowning at me. I stepped back and let her go.
“I need to slow this shit down.”
She stood naked in front of me with an expression on her face that seemed to be half confusion and half frustration.
“What does that mean?”
I wasn’t sure I even knew.
“It means I want you sitting cross legged in the middle of the bed waiting for me while I take a minute,”
I bit out. My head was so damn full I thought it might actually explode.
Too many thoughts.
Too many fucking feelings. I jerked my chin at her and snapped,
“Go.”
Her eyes widened a fraction and I pushed my breaths out while waiting for her to submit. When she didn’t, I growled,
“Carla, I need you to go and sit on the bed. Now.”
“I’m giving you five minutes to get your head back in this. I’m all for bossy and shit, but I draw a line at whatever the fuck you call what you’ve got going on at the moment. Barking orders at me is a whole lot fucking different than dominating me.”
With that, she stalked out of the bathroom.
Thank fuck. 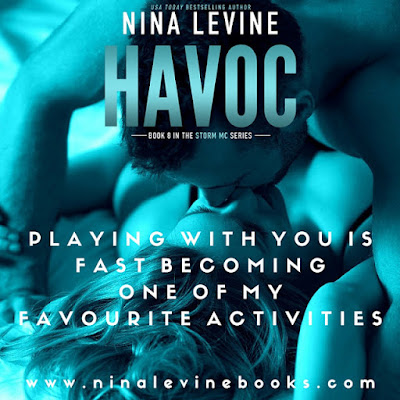 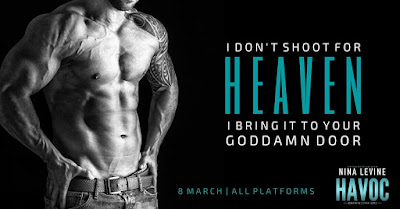 Sign up for alerts from Nina when new alphas are ready for you - http://eepurl.com/bLydcf

USA Today Bestselling author who writes about alpha men & the women they love.
When I’m not creating with words you will find me planning my next getaway, visiting somewhere new in the world, having a long conversation over coffee and cake with a friend, creating with paper or curled up with a good book and chocolate.
I love Keith Urban, Maroon 5, Pink, Florida Georgia Line, Bon Jovi, Matchbox 20, Lady Antebellum and pretty much any singer/band that is country or rock.
I’ve been writing since I was twelve. Weaving words together has always been a form of therapy for me especially during my harder times. These days I’m proud that my words help others just as much

ENTER TO WIN AN AMAZON GIFT CARD & SIGNED HAVOC PAPERBACK
CLICK TO ENTER - http://ninalevinebooks.com/havoc-paperback-amazon-gift-card-giveaway/
Posted by ShutUpShabby at 8:57 AM