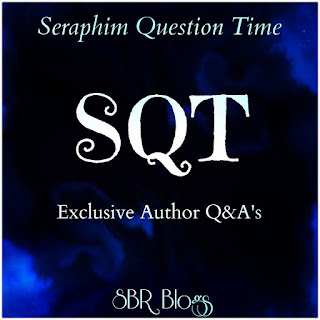 This week our exclusive interview is with contemporary romance author Adrienne Dunning. 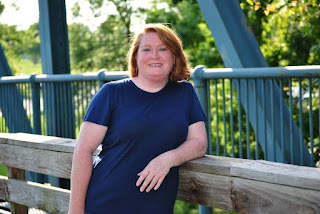 Adrienne Dunning is simply a Southern gal who has fun playing poorly at golf when she’s not crafting novels.  She loves all forms of expression—writing, dancing, cooking, talking—and does them frequently and with abandon.  She creates endearing and feisty characters full of humor and just a little awkwardness to keep them "real".  Although a possible mystery series is under current exploration, her current works are primarily aligned with the contemporary romance/chick lit genres.  She is heavily active in her local NaNoWriMo chapter, and Seeking Solace, her debut novel which released April 2015, is the resulting product of a NaNo project.  Her second novel, a paranormal/contemporary romance titled Revolution, releases October 1st.  A native of Bertie County, she currently lives in the coastal region of North Carolina and draws inspiration from that region as the setting for many of her stories.

Describe yourself in 3 words.


If you could have written any book which book would it be and why?

That's a hard question. As fun as it would be to consider writing someone else's book (and I'd pick a favorite, of course), the downside to that is the book would then not be the same. What I love about that book or what makes it popular would not be there. My experiences and ideas are nothing like the original author's. The story would be completely different, and if that were the case, then I wouldn't love it as much.

If I were to be completely self-serving and answer this, I would probably say Twilight...simply based on financial gain. LOL. But then, if I had written those...they'd be very different. With my luck, they'd probably have bombed. Ha ha ha.


Who is your favourite of your own characters (either already written or still in your head) and why?

So far, my favorite is Nate from Revolution. His book released six months ago, and I still can't get him out of my head. He's a tender, quiet man who has experienced such tragedy. Watching his journey from the darkness back to the light--to love and hope again--was special. I'm still moved by it, even while writing other stories.


Best book you have read so far this year, and your Favourite book of all time?

Favorite book of all time--Anne of Green Gables. Bought it at the school book fair in 5th grade and fell in love. It was the book that made me want to write my own stories.

Best book this year--that's so hard to choose. I enjoy so many different types of books, and I usually pick good ones! That being said, as of March, I think I'll have to say "The Crooked House" by Christobel Kent. It was twisted, dark, and threw you curve-balls. Although, ask me later in the year when I've read more, and my answer may be different.


Are there any other authors who inspire you?

Absolutely! All my fellow authors inspire me in so many ways. They make me think differently, more deeply, more reflectively. I can only hope that enables me to write better and better stories. A few contemporaries that I especially draw inspiration from and admire (either personally or professionally) are Railyn Stone, Jana DeLeon, Ava Miles, Sharon Bolton, and Stephen King. Classic authors that I consider as having the greatest influence on me are Jane Austen, L.M. Montgomery, Charles Dickens, Nathaniel Hawthorne, Edgar Allen Poe, and William Shakespeare. (I was a literature major, after all.  And no, I don't like reading AT ALL. LOL)


Favourite thing that's been said about one of your books?

A reader once told me they felt like they'd just had a vacation in Scotland after reading Seeking Solace. I just loved that. My stories play out like movies in my head, and I try to write what I'm seeing. I want the reader to be immersed in the world I see. To know that someone actually experienced that meant I did my job.


What does the next twelve months look like in your book world?

In a word--BUSY! I have a series releasing in 2016 consisting of three novels and a holiday novella that's based on characters from my debut novel, Seeking Solace. I'm currently deep in editing and publication phases for those. I also have two stand-alone novels in progress that I plan to prep for queries to agents/publishers to try and branch into hybrid publishing. I also have a cozy mystery series currently in the planning/outlining phase.

Ok, my all time, old faithful book boyfriend is Mr. Darcy from Pride & Prejudice. He will always have a piece of my heart. Always.

I'd probably have to say my current book boyfriend would likely be Deputy Carter LeBlanc from the "Miss Fortune Series" by Jana DeLeon. I'd LOVE to run into him in real life!


If you were stuck on an island with just one paperback book, which book would it be?

"Louisiana Longshot" by Jana DeLeon. That book is hilarious!!!! (And I love to laugh.)


Favorite line from a book?

From "Gator Bait: A Miss Fortune Mystery" by Jana DeLeon


What's your go to karaoke song?

Well, I never really do karaoke, but I am always singing in the car. I'll sing anything really--as long as I'm by myself. But, if I had to pick just one, I think I'd go with "Natural Woman" by Aretha Franklin. It's such an earthy, sensual song, and one you can really throw your voice into.


You've opened up your wardrobe and your clothes aren't there, instead it's your dream world! You walk through, what's the first thing you see?


Is there a particular genre, maybe outside your comfort zone that you would like to write?

A psychological suspense thriller. I love those, but I don't know if I could write it. I'd love to pluck up the courage to try it someday though.


What's the best and worst advice you've ever received?

Best advice I've gotten-- "Don't write what's on trend; trends constantly change. You just write your own way about stories that speak to you, and eventually the readers will find them."

So far, I've been pretty lucky in that I haven't really gotten any advice that truly did me harm or set me back. I'd like to think that's because I've surrounded myself with some fairly smart people. Either that or I've let the bad advice just go in one ear and out the other!

I love words. I absolutely love it when an author uses a rich, full vocabulary to deliver their story. There are very few I don't like seeing in books really.

The two words I do loathe to see now are "throbbing member". That phrase has been so overused in romance throughout the decades. When I see it now, I just cringe...then roll my eyes. It's a comedic cliche' at this point when there's a wealth of words and phrases you could use. It's become the sleazy, used car salesman of the romance novel vernacular. You don't see it much anymore, but when you do...ouch.


If you had one superpower, what would it be?

Weather control! I love watching storms brew over the ocean, and I would LOVE to be able to make that happen.

That's a tough one... I think there are plenty of books/authors that should have more exposure. I would suggest Railyn Stone. She has three books out with a fourth currently at press. She uses contemporary romance to examine and explore interracial relationships. I've really enjoyed her stories and characters. Her tag line is "You Can't Put a Color on Love."


Who is your absolute favourite man candy?


If you didn't write books, what would you be doing?

Reading them. (Not that I don't already.) I would be working with books in some way...I've worked as a librarian, as an English teacher, as a writer. I'd find some way to continue to be surrounded by books and stories.


There is a massive awards ceremony for authors, both trad published and indie. It's a big shindig and everyone is there. In a room full of these incredible people, who is the author that makes you mush and you totally fangirl over them?

I would probably say Sharon Bolton. I think I've read every book she's put out. She's a British novelist who writes mysteries/thrillers. She has this awesome ability to write mood and atmosphere. I get lost in her books in the best way possible.


What is your #BookZero? That one book you've read again and again, and you know you will re read it again?

Anne of Green Gables. I've lost count of how many times I've read it!

Follow me on Facebook at www.facebook.com/adriennedwrites and on Twitter @adriennedwrites for updates on this year's novels and general reading fun. You can find my novels on Amazon or at www.adriennedunning.com I love hearing from readers, so feel free to reach out!

SBR is an absolutely amazing blog, and I can't thank the team enough for letting me connect with their readers. Keep up the awesome work, ladies!! You rock!
Posted by ShutUpShabby at 7:35 AM