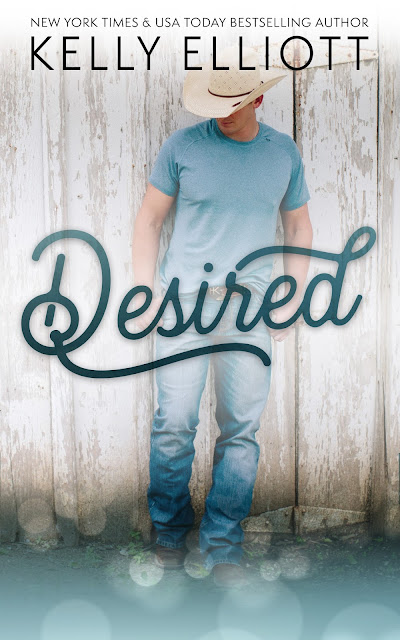 I thought all I wanted in my life was to succeed at football and one day take over my grandfather’s ranch. Nothing else mattered but those two things.

Why suddenly did she appear every single night in my dreams? The faceless woman who had me waking up each morning soaked in sweat with my heart nearly pounding right out of my chest.

And why was she the one thing I desired more than anything?

The front door immediately opened, and four girls trickled out. I tried like hell to get a better look at them all.

Once the door shut, Josh let out a laugh. “Is it just me, or does Jeff seem like he’s lost his damn mind?”

“Not just you,” Brad stated.

I watched as one of the girls moved closer to Jeff. Her brown hair was piled on top of her head, and her back was toward us.

“Me either,” Brad stated.

Josh practically crawled into the front seat. “Do you think that’s the sister?”

Another girl walked up and got between Jeff and the girl who might be Ellie. It looked like she had brown hair as well. She looked pretty from what I could tell.

“Shoot me right now. That girl has a fucking hot body,” Josh said.

“You better hope that is a friend of the sister’s and not Ellie herself,” I said with a laugh. “But you’re right. She does have a nice body. So does the one with her back to us.”

I knew that was Ellie. I couldn’t explain how I knew; I simply did. My chest was pounding with the idea of her walking up to the truck and Jeff finally introducing her to us.

“Yeah, so does the blonde,” Brad added. “Can’t really see the other one; Jeff’s blocking her.”

“She has red hair, and trust me, she’s rocking a hot body as well and is pretty as fuck,” Josh stated as he leaned farther up into the front seat. “Why do I feel like I’ve seen her before?”

“Dude, why don’t you just fucking crawl up here already?” I snapped.

“Why didn’t girls look like this when we were in high school?” Brad asked with a sigh.

All three of us laughed as a porch light turned on, lighting it up for us to get a good look at all the girls.

The girl who had her back to us, who I was guessing was Ellie, turned and looked at the truck.

She was beautiful. My heart felt like it dropped to my stomach.

Josh gasped. The fucker actually gasped. “Holy. Shit. No wonder the bastard has been keeping her away from us. She is hot as hell.”

“That she is,” Brad agreed.

My eyes strained to take her all in. I could see her, could tell she was absolutely stunning, but I needed to see her better. Study her face so I could remember it.

Jeff pulled her into his arms and kissed her on the forehead. They took a few steps closer to the truck, and Jeff pointed. He leaned down and said something to her, making her look directly back at the truck again and smile.

My breath caught in my throat. She was stunning. I wondered what she looked like with the sun shining down on that pretty face of hers.

Ellie lifted her hand and waved toward us.

“I’m getting out!” Josh said, trying to scramble into the driver’s seat. I stopped him and pushed his ass back, forcing him to land next to Brad, who was laughing his head off.

I pointed to Josh. “Dude, he told us not to get out. Unless you want to get your ass beat, I suggest you stay in the truck.”

Crossing his arms, Josh looked away.

“Are you pouting?” Brad asked. “You’re freaking pouting. You pansy-ass!”

I couldn’t help but smile before turning back around and looking at Jeff and Ellie. As they moved a bit closer, Jeff stopped and turned to his sister. Her gaze went back to the truck, and it felt like I was having a déjà vu. A chill ran up and down my spine, and I couldn’t shake the feeling I’d seen Ellie somewhere else.

“The prequel to the Wanted series, 4 stars”

If you’ve read the Wanted series then you already know all the players in Desired. Desired is a look into the guys lives before the girls came along.

You see how each of the guys were doing and where they were at before the girls crashed into them.

It was fun to see Gunner being over getting hit on, how Jeff always wanted Ari, and Josh being Josh before Heather.

The only thing I disliked is there was a decent size chunk from Desired you will already know from reading the series, thus the 4 star review.

18-year-old Ellie Johnson always believed she would never be loved or wanted by anyone. She focused all of her attention on her grades and getting into the University of Texas to start a new life away from her mother.

The last thing Ellie expected was to fall in love with Gunner Mathews, a starting linebacker for the University of Texas football team and not to mention, her brother's best friend.

Gunner only has two passions in life, football and his grandfather’s ranch, until he falls for his best friends little sister. He will stop at nothing to show Ellie how much he wants her, even if it means he has to move faster than she would like.

Gunner knows they are meant to be together forever, but Ellie keeps denying her feelings out of fear of being hurt again. Every time he gets close to winning her love, something pushes her away again. Will Ellie ever be able to let go of the past and let him into her heart, and will Gunner be patient enough to wait for her?

This is a new release of an edition originally published by K. Elliott Enterprises, INC.

Her bestselling works include, Wanted, Broken, Without You, and Unconditional Love, to name just a few.

Kelly has been passionate about writing since she was fifteen. After years of filling journals with stories, she finally followed her dream and published her first novel, Wanted, in November of 2012.

Kelly lives in central Texas with her husband, daughter, and two pups. When she’s not writing, Kelly enjoys reading and spending time with her family. She is down to earth and very in touch with her readers, both on social media and at signings.

To find out more about Kelly and her books, you can find her through her website.