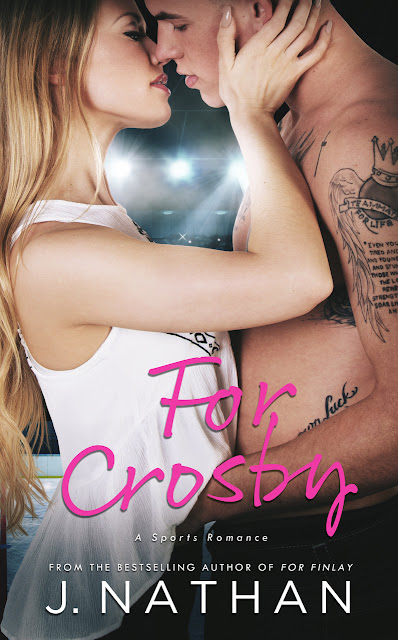 Crosby Parks had the life most guys only dreamed of. A wealthy family, girls vying for his attention, and pro scouts after his hockey skills. But when the life he knows comes crumbling down, he’s sent to Alabama to escape the media storm and to rebuild his life. If Crosby has any shot of playing professional hockey, he must keep a low profile and graduate from college. But the second he steps foot on campus, keeping a low profile becomes impossible.

Sabrina’s mind is made up. After encouraging Alabama’s star wide receiver to friend-zone her and pursue someone else, she’s determined to focus on herself and stop being everyone’s trusty sidekick and shoulder to cry on. But when she stumbles upon a naked hockey player tied to a tree in the middle of the night, Sabrina’s life is thrown upside down. Because when you leave someone tied to a tree, they eventually get free.

A New Adult Sports Romance in the For You Standalone series. This is book three. Each book follows a new couple and can be read as a complete standalone.

This author is amazing! I swear anytime I read a book by this author I am astonished. She has a way of writing characters that really speaks to readers and makes them feel like they are invested in them. For Crosby is no exception. This book has heartbreak and tears, but also happiness and heat. If you like romance novels, then pick this one up for sure.

The plot of this book is similar to the others in the series, but they can be read alone. The other books followed football players. This book follows a hockey player instead. The main female we meet in the previous books, but she now has the chance to have her own book. The plot of this book was nice because it shows that everyone has their own problems and people shouldn’t be judged based on one interaction with them. Sometimes we catch people on a bad day and that is not an excuse for their actions, but it does give you a different perspective if you are able to take a step back and look again.

Sabrina is me hero. She is a strong independent woman who is selfless. She puts others first, but knows when she needs to stand her ground. What I love most about her is her caring heart. Sometimes when a woman is feisty, she gets labeled incorrectly. I love that even though she is tough on the outside, she has a sweet center. Crosby surprised me. I expected the jerk that he was, but I didn’t expect how sweet he was too. I think he is my favorite male in this series. He has his own issues, but he is willing to do whatever he has to for Sabrina. That wins my heart.

The heat in this book is not missing a beat. These two characters were meant to come together at some point. Their missteps in the beginning lead to a wonderfully delicious meeting of the bodies when they finally admit their attraction. What I love most about the heat is its not all passionate and rough. It is sweet at times too. This made me fall in love with the characters even more.

I love the writing style of this entire series. I love how the pace is steady and each book tackles some societal issue. In this one, it is the fact that often times people are judged based on the amount of money they have or they are punished for the actions of others. I also like that this story discussed bullying as well. It is a serious topic and the author did well writing about it.

Overall, I just am in love with this entire series. I really wish I could go back and read For Crosby again as if I had never read it. All the feelings I felt, yeah they were on point. I would recommend this book to others and plan to. If you want a novel to lose yourself into, then pick this one up. 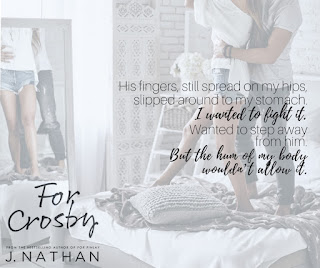 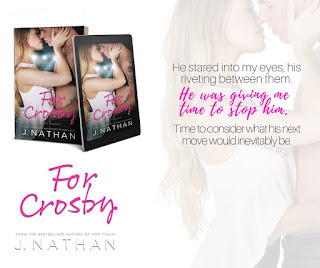 Author Bio:
J. Nathan is the author of new adult and sports romances with cocky heroes and sassy heroines. When she's not writing, she's a total romance junkie! Add an alpha male who's unlikable in the beginning...even better. She loves watermelon margaritas, guys in backward hats, country music, the summertime, and her amazing family and friends.

Excerpt:
His fingers, spread on my hips, slipped around to my stomach. I wanted to fight it. Wanted to step away from him. But the hum of my body wouldn’t allow it. He lowered his head, burying his nose into my neck. “You smell amazing.”
Though my thighs quivered, I tried to remain indifferent. “It’s called sweat.”
His body shook with laughter. “Well, then I’d like nothing more than to taste your sweat.”
The thought of his lips on my neck sent a delicious shiver rocking through me. “Do lines like that normally work for you?”
“Who said it’s a line?” His hands slipped under the hem of my shirt and coasted across my stomach. “God, you feel amazing.”
“You’re a horny guy. Of course, I do.”
He shook his head, his nose running along my jawline. “I may be horny, but you still feel right in my arms. I’m wondering how you’d feel beneath me.”
I jerked away from his grasp, spinning to face him. “That.” I jammed my finger into his chest. “That right there is why this was a bad idea.” The traitorous hum of my body persisted as the lights flashed across his confused face. “It’s like you’re capable of being normal for like two minutes then you turn into an asshole. I don’t get it. And I’m over it.”