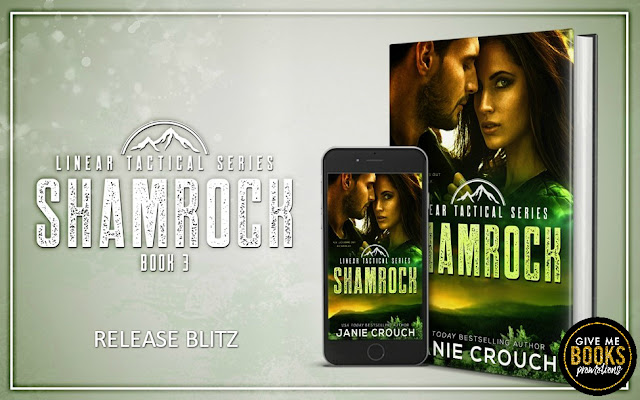 
Every mission
has a price.

He never meant for her to pay it.

Aiden has never left anyone behind. Not a comrade and certainly not an
innocent. But when an undercover mission goes wrong, he's forced to abandon a
woman trapped in a human trafficking ring.

Violet learned brutally that no one is promised a happy ending. She knows Aiden
blames himself for his part, but she refuses to let her abduction define the
rest of her life.

She won't be a victim again. And she's going after what she wants: Aiden.

Watching Violet transform herself into a fierce warrior is the sexiest thing
Aiden has ever seen. The honorable plan would be to stay away from her--let her
heal and grow without the shadow of his mistakes clouding her progress--even
though every instinct tells him to claim her for his own.

But when they discover the danger they thought they'd left behind is closer
than ever, they'll have to face their deepest fears and fight
side-by-side in order to survive.

This book was amazing! Ah-may-ZING! I wasn't sure what to think about Aiden after learning a few tidbits in the first two books. Shamrock is the third book in the Linear Tactical series, and while reading the first two is beneficial, this book can be read as a standalone. I've enjoyed reading all the books in this series.

Shamrock's plot takes us through a tumultuous journey-the heart-wrenching journey of Violet through some unmeasurable torture and then growth; and Aiden's path to help her and have a relationship with her and solve a military mystery. I didn't take any notes or breathe through the first half of the book until Violet was safe! But you knew there was more problems still to be dealt with.

Aiden's role is both alpha military man, but also a lot showing how a man should act. Careful, deliberate, with unending ability to listen and pay attention to the details. He embodies the song, “Take a Drunk Girl Home” by Chris Jansen, and shows his love by so many of his actions. Even if he has to bide his time, and makes some mistakes. Violet is a bright young woman who has to face a cacophony of tough situations; a childhood loss, human trafficking, betrayal and learning how to be herself and meet familial expectations. She rises to all the occasions with the spirit of a warrior and strength of mind that most people wouldn't be able to. I loved the way the Violet and Aiden's characters dealt with their circumstances; even when they made bad choices, they were ones that were so relatable.

Despite meeting under some of the worst circumstances I've ever read, the Aiden and Violet were made for each other! Aiden saw Violet. And the relationship builds from his saving her. The author quite nicely deals with the doubts both might have and creates a delightful and robust amount of chemistry between the two. They start off rocky, and have some ups and downs, but along the way, they set the sheets on fire.

I didn't stop reading until at least halfway in. I may have also held my breath during most of that as well. Janie Crouch was able to weave a most intricate tale of criminals, law enforcement, military, and innocence. I had such a rush of emotions thanks to Aiden and the wise beyond her years Violet. It was also great to see glimpses of old friends from the first two books.

I loved getting to know Shamrock more. He was short on details as he was introduced in the first two books so I wasn't sure how this would turn out. But once again, the author created a mesmerizing romance mystery. I hope we get to see the conclusion and a happy ending for Jordan soon.

“For the first time in his life, Aiden cursed the fact that he was Shamrock-the one lucky member of the team.”

“He would do anything to carry this for her, make it better, take away the pain of the memory. But he couldn't.”

“You survived. That's what we teach at Linear. It is the number one rule that has no exceptions.”

“I want you. Even if you are like Off my lawn old!”

“We stand by each other's sides. And we're stronger because of it.”

“He wouldn't fight her battles for her, but he would damn well be by her side as she was facing them.”

Violet knew
what she wanted.
No more
being passive. No more agreeing to what might in fact be good for her but
wasn’t what she really wanted.
“You
respect me,” she said gently.
The relief
flashed and Aiden’s hazel eyes. “Yes. I have nothing but respect for
you.”
“Thank
you,” she whispered, trailing her fingers through his thick hair. “And thank
you for getting me home safely last night. And like I said before, thank you
for getting me out of that hellhole a month ago, for figuring out that I was in
trouble when to anyone else it just looked like a normal part of that
situation.”
His brows
furrowed. “You’re welcome for all those things. But there’s no need—”
She put her
finger up to his lips. “I just wanted to say it one more time to make sure I’d
been clear. Because now I’m done saying thank you. And I think you better take
me inside. Otherwise, Mrs. Mazille and her neighborhood watch might get quite
an eyeful with what I’m planning to do to you.”
There was
only so much a man could take. A line where he snapped. A great deal of his
Special Forces training had been spent learning how to push that line as far
back as possible.
But when
Violet’s fingers reached for the hem of the T-shirt covering her body and began
pulling it off, Aiden found his line very clearly.

USA TODAY
bestselling author Janie Crouch writes what she loves to read: passionate
romantic suspense.  She is a winner and/or finalist of multiple
romance literary awards including the Golden Quill Award for Best Romantic
Suspense, the National Reader’s Choice Award, and the RITA© Award by the
Romance Writers of America.

Janie
recently relocated with her husband and their four teenagers to Germany (due to
her husband's job as support for the U.S. Military), after living in Virginia for
nearly 20 years. When she's not listening to the voices in her head—and even
when she is—she enjoys engaging in all sorts of crazy adventures (200-mile
relay races; Ironman Triathlons, treks to Mt. Everest Base Camp)
traveling, and movies of all kinds.