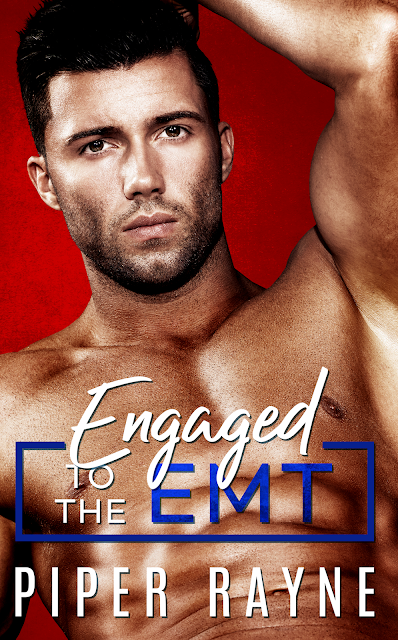 Luca Bianco is a jerk. There I said it.

He thinks he’s so suave and sexy, walking around in his paramedic uniform stretched out by all his hard muscles and saving lives every day. I swear he thinks every woman in the world would kill for a chance to be with him.

Men like Luca are good for one thing only—a one-night stand—not commitment. I don’t care if my friend did pay good money at a charity bachelor auction for me to go on a date with him, I refuse to do it.

That is until Luca offers me a deal I can’t refuse, and I agree to be his pretend fiancé.

The heat that’s simmered between us for a decade ignites and I’m not sure even Luca will be able to kickstart my heart after I call code blue.

What’s that saying? Love is blind?

Not true. I can see this head-on collision coming a mile away.

The light from the street reflects the humor shining in his eyes. “I’m just sick of the fighting.”

“Fighting is what we do best. It’s basically how we communicate.” Then all the puzzle pieces join together in my head. I’m so stupid. “You want something.”

We pull up in front of my house just as I realize what a fucking moron I am.

“Nope.” He takes the keys, grabs the bag of food and gets out of the car.

He’s totally playing me. I might not be a psychologist who can quickly spot a liar, but Luca, I know too well. Not well, but when it comes to our interactions—I know him. And this nice Luca, taking me to a Hawks game, buying me dinner, wanting to eat with me…this isn’t the Luca Bianco I know.

I climb out of his car, the slam of the door echoing down the dark residential street. “Tell me what it is you want.”

His lips remain straight, not even a hint of a smile or smirk.

Another clear sign that this isn’t the Luca I know.

“Come on. Let’s eat.” He nods in the direction of my house.

“By prolonging whatever it is, you’re just pissing me off, which means if you need something, I’m more than likely going to say no. Or we could play a little game…”

“How about we eat?” He waits patiently as I insert the key into my door, disengage the alarm that Cristian, Luca’s brother insisted we get installed.

We step inside and he’s the one to shut the door and flick the lock.

“Planning to have your way with me?” I’m not serious as I walk into the kitchen to grab us some drinks, utensils, and napkins.

The sound of the television blaring drifts into the kitchen seconds later.

With my hands full, I head back into the living room. “Feel free to make yourself at home,” I deadpan, handing Luca a Vitamin Water and a napkin.

“Thanks.” He lifts the napkin and drink. “And thanks.”

We sit on the couch because although our house is nice and newly redecorated thanks to Maddie’s mad skills, the family room area is small and the best place to see the television is the couch. No worries though, there’s still a cushion between us.

I open up my box of food, a little bit of steam hitting my face. “I can’t just sit here and watch soccer with you and not know what you want.”

I hate that I’ve had to resort to being sincere in my request.

He opens up his own box and I’m a tad jealous I didn’t get the burger. It smells and looks delicious.

Luca doesn’t respond, just stands and heads into the kitchen.

He knows our house way too well thanks to his brothers always suggesting we meet here when we go out.

I pop a cauliflower floret into my mouth, tasting the Korean flavor makes my mouth water. Opening up my Vitamin Water to cool my tongue, I ignore Luca’s return, instead, fixating on the television as he rounds the coffee table in front of me. The couch dips with the weight of his body which is now closer than before.

I’ve never been alone with Luca, much less this close. I feel a shift in our volatile relationship like the stillness before a storm. It’s too quiet. It’s too calm. Too…enjoyable.

“Here.” My gaze shifts from the television, although I couldn’t tell you the score of the game and I see he’s holding half his burger out to me.

“What’s this?” I ask, loading my mouth with another califloret.

“I think you had a little bit of drool dripping from your mouth when I opened the container. How about we share?”

He smiles. A smile I’ve only ever seen on his face with his friends, or his brothers, and especially his mom. He doesn’t even wear this smile when he’s with girls. At least not that I’ve ever seen. That fact runs around my stomach stirring up the butterflies to max flight.

Where are the eighty mile per hour winds?

“Luca, if you don't tell me what you want, I’m going to kick you out of my house.” I take half the burger and slide my cauliflower and fries closer to him as an offering.

“HA!” I point to him with a greasy finger. “You do want something from me. Tell me what it is.”

“You’re ridiculous you know that, right? A normal person would wait.”

He blows out a breath. “Fine. I need a favor from you.”

“There is a fine line between love and hate, 5 stars”

There is a fine line between love and hate and Luca and Lauren? They’ve been circling that line for longer than they realize. Once again Piper and Rayne wrote a story that pulls you in from the first page and doesn’t let you up for air until the very last page. I can’t believe I’m going to say this but I think Luca may be my favorite out of him and his brothers.

Lauren is very competitive and something about Luca just brings it out in full force. With her two best friends madly in love with his brothers there is no way she can avoid him forever. Then he comes to her needing her help. Will she deny him?

Luca has always had a thing for Lauren. But instead of acting like an adult he tends to go the old school pull pigtails route. Only Lauren doesn’t wear pigtails… When he finds himself in a situation, he cant help but turn to her in need. What happens when they finally spend some time together without the boxing gloves? Will these two find much more than they ever expected?

Take a chance on Engaged to the EMT, you won’t regret it.


Engaged to the EMT is the 3rd and final book of the Blue Collar series and they saved the fireworks till last. I have enjoyed every word of this series and those Bianco brothers have set some high standards in the book boyfriend department.

Luca and Lauren; love to hate relationship, competitive till the end and both harbouring some underlying feelings that will light up the night sky. When the Bianco matriarch gets sick he is determined to make her happy ‘just in case’, cue in Lauren. Being Luca Bianco’s fiancé sounds like a quick and easy way to score a date for her work Christmas party and have her boss stop asking her out; Win Win, right? Wrong. When feelings start to get muddle up, jealousy goes into over drive, hearts get involved leaving both wondering how they got to this point.

Luca is the playboy, the youngest and doesn’t operate like his brothers; he lives the bachelor life and is a mumma’s boy through and through. Lauren is smart, competitive and full of sass, she takes life head on, never afraid of a challenge.

Luca and Lauren’s love/hate relationship has been simmering away behind the scenes for years, Luca had put his feelings aside but when they come together, their chemistry is hot enough to burn the pages.

I personally loved this book, I have been hooked on the series from the start. Piper Rayne has the ability to pull you into a story and make you feel like you are on of the characters. The writing is flawless and they leave you wanting more. I cannot wait to read about the Mancini Brothers, Sexy Filthy Boss. Bring on 2019!