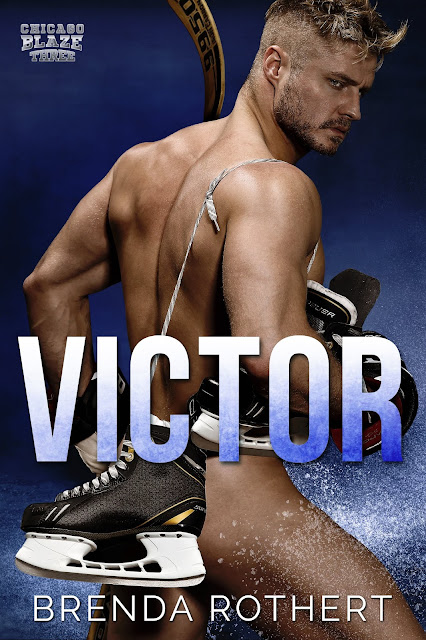 He’s a hockey star with a headboard full of notches. She’s a shy NHL concession worker at who’s never been kissed.

Lindy
They don’t call me Belinda Boring for nothing. It’s my name, after all. And for a 23-year-old with plain brown hair who still lives at home and gets tongue tied over nothing, it’s a fitting one. I’m not even one of those quiet girls with a hidden talent, unless making a mean order of nachos at the NHL arena I work at counts. My life consists of working, reading and harboring a secret crush on a hockey player who doesn’t know I exist. At least, until we accidentally meet and become unlikely friends.

Victor
I’m living the dream. A poor kid who worked his way into the NHL, I’ll never forget where I came from, though I try to. My past follows me, a nagging reminder that I’ll never be what everyone thinks I am. As the threat of my secret being exposed looms closer, my game slips, leaving me in danger of being cut from my team--the only family I have. I’m losing my hold on everything when a new friend helps me find hope. She’s nothing like the women I’m used to, but by the time I figure out that’s exactly why she’s right for me, I’ve lost my chance with her. Somehow, I have to convince a woman who thinks she’s invisible that she’s the only one I see.

Lindy isn’t convinced love is going to happen for her, she’s Belinda Boring after all. But that doesn’t mean she can’t crush on a guy and lets just say she’s crushed on Victor forever. She never thought she would meet him, let alone talk to him. Next thing she knows is Victor is befriending her. The question is will this budding friendship one that will last?

Victor has a type when it comes to women and Lindy isn’t it. He has no problem that there is something about Lindy though. His intention is to be friends but then that pesky thing called jealousy rears its ugly head. Will he be able to convince Lindy to give him a chance?

I enjoyed Lindy and Victor together. I loved the honesty they had together from the start. I enjoyed the hockey aspect of the story and Victors hockey team who made appearances. Rothert through me for a loop that I never saw coming. With all the positive said I can’t help but admitting That Victor was missing something for me. What I have no idea, but the story just didn’t have me sighing in pleasure. That could be just me though and I think if you enjoy a hockey romance you should give Victor a try.