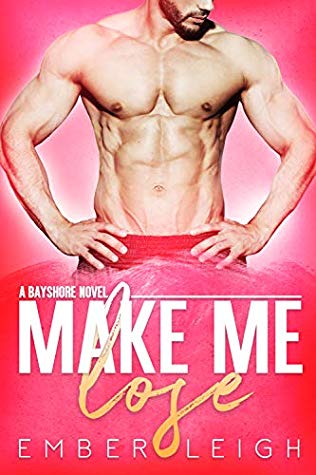 Today we have the release blitz for Ember Leigh’s MAKE ME LOSE! Check it out and be sure get your copy today!

About Make Me Lose:
Grayson Daly and I aren’t just rivals. We’re enemies.

Born minutes apart on the same day in the same hospital, our parents thought this meant we were somehow destined to be together. We knew were we just destined to beat each other.

Competition boiled over until junior year, when the cold war turned into an unexpected peace offering. Maybe my hormones allowed me to notice his broad shoulders, stormy gray-blue eyes, and soccer star’s chiseled frame. But after I fell for him…he stomped all over my heart.

Ten years later, I’m at the top of the realty game in Bayshore and Grayson is just a distant memory. Until he shows up from NYC, his ego bigger than a skyscraper, and asks me to sell the house he recently inherited.

It’s easy to say no. Even though I want to climb him like the jungle gyms we used to dangle from in strong arm battles.

But I forgot that Gray doesn’t take no for an answer. And that he isn’t content unless he’s defeating me.
He butts into my evenings on the boat. Ropes me into water skiing battles. Even shows up at the bar and creates a scene when I’m scouting a date to the upcoming Bicentennial Ball.

But if he wins, that means I lose.

And I’m not ready to cede victory just yet.

Our Review:
“Fine line between love and hate, 5 stars”

Grayson and Hazel were either destined for love or destined to be enemies and for years it appears to be the later. There was a brief period when they called a truce to the war between them and it was everything and more. Then it all came crashing down. Years later Hazel has built a great life for herself their home town. The only thing missing is a man to call hers.

Grayson doesn’t want to be in his hometown. But sometimes it cannot be ignored. He didn’t plan on seeing Hazel but in a small town that’s unavoidable. One thing is for sure the attraction runs deep between them. Will Hazel make him stop and thing about what his mother has been begging him to do for years? Is she his game changer?

I adored these two. I love the whole enemies to lovers idea. The chemistry was off the charts between these two. It was like everyone else faded away when these two were near each other. Then you had the secondary characters her just added a little more to the story. One thing is for sure and that’s that Leigh killed it with these two. I cannot wait to see what she does with the rest of Grayson’s brothers.