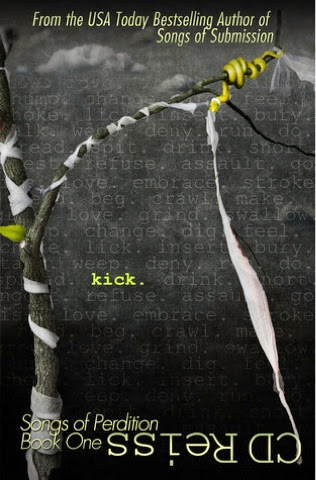 I've had this to read since it came out, but had to finish other things first, but when I saw Use had been released, I decided I needed to bump this up the list. Use was looking far too good to leave.
Ok, so absolutely, hands down, loved Songs of Submission series. It shocked the pants off me with how fantastic it was. I also loved how it was a series of novellas that always packed a punch each time. Now, obviously since then Spin has been released, but I haven't got around to starting it yet. (I know, really bad. It's up near the top of my tbr list) Anyway, so Kick is one of the reasons why I ended up buying Bend. The compilation was jam packed with amazing authors but seeing C.D. Reiss had a new novella on there, and it was a different Drazen sister was exciting. So I 1-clicked that bad boy and thank goodness I did as it's now a little like gold dust.
Anyway. So I had kick and very excited to read it. It was another novella series as well, which I was excited about. So I held on for a bit, like I said and then Use came out this week, so I consumed Kick yesterday in one sitting.
Yet again, C.D. Reiss has pulled out a flawless, captivating, gritty new story. Right from page one, my head was all over the place trying to grasp what had happened. Fiona Drazen, the socialite sister of Jonathan. There is a lot of those Drazens and it's hard to remember who is who. Fiona has shown to be the one who is a party girl. She loves her drugs, booze and men! Always tailed by an entourage and paps, but oblivious to everything around her, except getting what she wants at that time. Now it would seem what she wanted was Deacon Bruce. The gorgeous, mysterious man who becomes her master. After what would appear to be a crazy intense, relationship discovering her submissive side and just how much she needs her Master and what he does for her. (All this seen through flashbacks etc) She starts the book in a drug haze, in a place she doesn't recognise. This time, the drugs are prescribed and she is in a psych ward. She has no recollection of any events prior to her being in there, or what led her to her being there. She is told she attempted to kill Deacon, her Master. Yet, the memories are either black or fuzzy. She has no idea if she did it, or why she would do it. He is her Master, and everything to her.
Over the space of a few days she is introduced her therapist, who then puts her through sessions of hypnotism to try and get what happened that day to come out. So, we get some blurry and confused flashbacks. What I do understand is, it would seem Deacon becoming her Master saved her. Fiona was completely reckless and self destructive before him. She didn't care, she just wanted her next high. Through drugs and sex and anything else she could try. Deacon comes along with his rules and regulations and seems to be able to pull her in. The way in which he controls her is precise and artistic. She starts to find herself depending on him, with his expertise in certain aspects of bondage, he sets her free and she needs and craves it. So through this relationship they develop, it's hard to see why Fiona may want to harm Deacon. It's obvious his power, controls her waywardness. Settles her. We get a few snippets of the day that it all happens but it's still not entirely clear what happened still.
It's another 120 ish pages of awesome writing, intense characters and overwhelmingly good storylines. I love Fiona, she is so blunt and doesn't care a less what everyone thinks of her. Her crazy life is non stop but fascinating. Plus, what I didn't realise was that this book takes place back when Jonathan was only 16ish, when he was with Rachel. Obviously that would only mean something if you had already read Songs of Submission, but it's significant. It makes you think overtime.
In true, frustrating yet addictive C.D. Reiss style, we are left with another crazy ending. Which is why I'm so glad I can go straight on to Use! There is 101 things running through my mind, but I can now go and find out if all or nothing is revealed in the second part. ;)