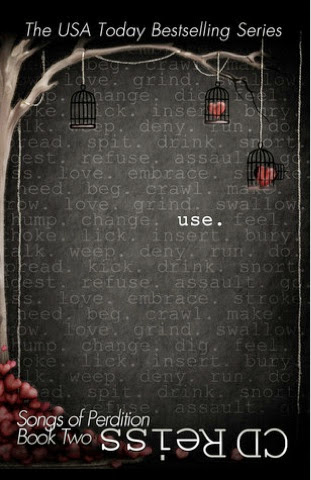 WOW!! Feeling really inarticulate and blurry, foggy brain after reading this. Of course I love this feeling. It tells me I have been reading a book from a Songs series. They all have this effect.
Use starts off where Kick left, well a couple of days. Fiona is feeling the effects of the decisions made at the end of Kick. Whilst in solitary, she spends the time between being practically unconscious and thinking. She puts herself into a kind of trance and remembers what happened that fateful day with Deacon, in the stables. The events that led her to being trapped in this psych ward, her prison. The only thing is, she will only tell what she remembers to Elliott, her doctor and he has gone. Plus, is what she remembered real, or is it her subconscious playing tricks on her, and making her think things that never happened, to make her feel better. Confusing but real.
Anyway, Elliott needs to come back and find out the truth, we all need to learn the truth!!
The really interesting thing about this book in the Songs of Perdition series, is the fact that we get Elliott's POV, as well. That was excellent. It was hard to gauge what he was thinking and feeling in Kick, as he manages to not let any emotions show on his professional mask. Yet, having his thoughts exposed in this book was intense. Now I feel completely torn on whether I think Elliott would of been a valid option for Fiona or whether Deacon is her only option. Elliott is finding his inner Dom, it's very exciting to follow that. His girlfriend perhaps isn't the best person for that experiment but hey, someone had to see it first. It's one of those perfect roles, a confused man. Not sure where he fits, what he wants, what he even feels. Yet, something that seems to be natural and really good for him comes out. A bi product of meeting and treating Fiona? Or something hidden deep for years. Hmmm can't wait to find out. Elliott has so much to explore, his past is a bit foggy and the fact that he wanted to work within the church but didn't is also important. I really hope we see him soon!!
Deacon, makes a real appearance this time. He is uhhh some sort of god? (Deacon effect there) The power and control he oozes, buzzes through the pages. It's a confusing mix of feelings, Is he good for Fiona or isn't he? Who knows but he is definitely someone I want to read more about, the little teasing moments aren't enough by far.
Poor Fiona, This second book, really had me feeling for her this time. In Kick, I had the idea she knew who she was and was happy with that. A few wobbly moments, but all in all, she was in a place she wanted to be. Reading Use, I realise I had it all wrong. She is where she is, through feeling she has nowhere else. She accepts the crap in her life as she thinks she deserves it. A very 'suck it up, you had it coming' attitude. That's why Elliott was so good for her. He was breaking this ugly feelings shell, making her feel she wanted to be something else.
As for the other incredible and intense characters in Use, there are plenty of them. All with colourful personalities.
Grrrrrrr at Warren, I'm not even going to start on him. No spoilers and I don't want to waste my finger energy tapping about him. I just hope he gets his comeuppance.
It's really bizarre to see Jonathan Drazen, so young. I can see the man from Songs of Submission series, already breaking through at that age. He never really disappears, even when it's not his turn. He still gets a starring role in his sisters story. Not that I'm complaining, I loved him. ;)
Karen. An old acquaintance from Fiona's party days, also in the ward. Again I can't say anything. I really, really hope Fiona and Karen manage to see each other again on the outside.
I always say it with these books from C.D. Reiss, her Songs novellas may be shorter, but omg they contain a huge amount of action. You wouldn't think it was possible to have quite so much happening, but it has. Plus I'm left trying to analyse it all, and not doing a very good job of it, hence brain numb.
Again, I loved this book. Now, for the wait for the second sequence! Arghh.


5 conflicted yet awe-inspiring stars!
Posted by Louise Seraphim Reviews at 4:24 AM