Review - The Contradiction of Solitude - A. Meredith Walters 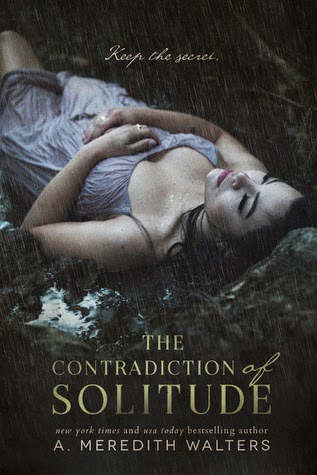 You may notice me, but you will never know me.
I prefer it that way.
I am the daughter of a monster.
Born from blood and lies.
Dead before I have truly lived.
But Elian tells me that I'm different.
He tells me that I'm beautiful.
That I'm an enigma wrapped in irresistibly complicated skin.
Elian says that he loves me.
These words terrify me.
I can't trust love.
Or hope.
Or truth.
Because I fear the beast inside.
It threatens to drown Elian and his sweet, unconditional love.
It's a beast that will destroy everything.

Well, this is going to be an incredibly hard book to review & rate.
This book is unlike anything I have read before. I never touch thrillers, I'll read anything as long as there is romance. Although there are slight elements of romance in this book. It's really not a romance book, so if you have to have a love story in your books with a HEA, I would definitely advise to walk on past this book.


Now, once we get past the no romance element of this book. We can see it for what it is. Dark, full on suspense and very cleverly written.


If you take a look at the blurb, you know it's not going to be a run of the mill hearts and flowers story. Which is fine, I love unconventional stories, and I absolutely love dark elements in books that I read. Which is why I wanted to read this, but I think that even this surprised me.
There is no way that I can summarise the story, in this review. I didn't read any summaries before jumping in, and I wouldn't advise anyone else to either. You need to jump in with no idea what it's about. As long as you're happy to read a book, minus the romance, it's a fantastic story and concept.


I actually think this book would make an incredible movie, it has such a striking story and the characters would be perfect on screen.
Layna, the mysterious, dark and enigmatic woman. Makes no friends, doesn't even engage in pleasantries. To most she actually comes across as plain rude. She doesn't feel the need to make connections, friends, lovers. She spends the majority of her time, flitting from the present to memories of the past, and watching people. She loves to watch people, and work out their secrets.


But I wanted to devour his secrets. All of them. Until I was bloated and full on the things he wanted no one else to discover.

Bluntly put, Layna is one of a kind. She is unlike any character I have ever come across before. I both hated and loved her. I loved how unique and dark she was, how unconventional and strange she could be. But at the same time, I also found her frustrating, and incredibly confusing. She was constantly contradicting herself. Talking of how unlike her father she was, how she distanced herself from him for 12 years. Yet, that all seems like a big ball of, 'I'll just deceive you, to confuse you'. In fact the majority of the story was a lot of deception, to confuse.
Elian I'm still baffled on. To start with I really liked him, but as time went on and his mask slipped, and his true self came out. I actually just wanted to give him a slap, force him to wake up, and get him far away from the toxicity that is Layna. He became quite annoying after a while, I know I should of pitied him, and it was there, a little. But really I just felt totally frustrated by him, and gave up trying to work him out. '


Now, I will admit I read the last 50% of this book at about midnight last night, with burning eyes and constant yawning, in the dark. But, I couldn't stop reading. So because it was so late, and I was so tired, I probably wasn't as clear headed as I could of been, and probably didn't grab all the clues, like I normally would of done. I don't read a lot of suspense and thriller (practically none), but I watch a lot of that on TV and love to guess the storyline, and outcome. But honestly, I just didn't guess the outcome. I spent 15 mins reading reviews with spoilers last night, after finishing this book, just to try and get my head around what everyone else came up with. And about 80% of people all said they had guessed what was going on, practically from the start, that it was somewhat predictable, and easy to see. I DIDN'T!! Yes, I know that makes me rather slow, and I will blame the tiredness. But I really didn't see it coming until the end. Even in the last chapters, I was sat thinking.....'No, this won't end like this. I know it won't, it couldn't' Yep, that was me being completely delusional. It's obvious I read a lot of HEA stories.


I'm not saying the ending was bad. It wasn't. It was just like the rest of this story. Different, unconventional, shocking, and very, very dark.
The most annoying thing for me, was the unanswered questions. I was led in bed for so long, wondering about some of the events. Did they really happen that way, what has really been happening all these years, and because everything ended up being quite a shock to me, I feel like I should of paid more attention to some little details.
This book was actually my first of A. Meridith Walters. I hadn't read any of her other books before this, so I have no idea if this was true to her style. But I will say, it was beautifully written. How something so dark, ugly, and twisted, can be written to the point of sounding, like poetry sometimes is a mystery to me. But I was in awe. It painted a dark and gloomy picture, but it was kind of beautiful in a depressing way. Yeah that sounded really strange, I know. It's hard to explain how this book made me feel, but for all the things I could moan about, I was completely addicted, and it definitely left me thinking and wondering.


Now if someone would like to explain the entire story back to me, and perhaps draw some pictures. I may feel a little more clearer on what happened. ;)
Very dark, very confusing, quite nasty and not very nice, but a real genius idea and beautifully written. It will stick with me for quite some time.
The only other book, I could in any way compare this to, and only for some elements, not all. Would be Mud Vein. I felt the same way after reading that, as how I felt after reading this. That dark hole kind of emptiness. And stacks of questions.
If you love dark thrillers, and don't focus on romance and happy endings, I absolutely recommend this.
Rating I'm still kinda lost on. I will give it a 4, because it stuck in my mind and I was blown away by just how clever it was.

"You can't forget the stars, Elian,"
I told him. He frowned, not understanding.
I didn't expect him to.
It was my story. My secret to keep.
And I would never tell.
Not to him.
Not to Matt.
Not to anyone.
It was mine.
And my father's.
It was ours.

**I was given a copy of this book, in exchange for a fair and honest review**
Posted by Louise Seraphim Reviews at 11:00 AM