Wren, the rich girl with a tainted past, is on a crusade to track down her father’s murderer only to find not one, but two, bad men.

Moghul is a sadist and businessman, with a finger in every kinky enterprise he can get his hands on and a jaded view on life. When his eye turns to Wren, he realizes how dull life has been. He hasn't tried everything after all. When they can’t say no, things might be more…interesting.

Glass is the dominating ex-SAS soldier. Each man is determined to keep Wren for himself using methods that may be illegal, immoral, or likely to make somebody feel the pain for a long, long time.

If you lie down with bad men, be prepared to get up on your knees.

The ending will be the reader’s decision. Give Wren to the dark or to the light, then read the other ending if you wish to.
Mindf**ks included free. 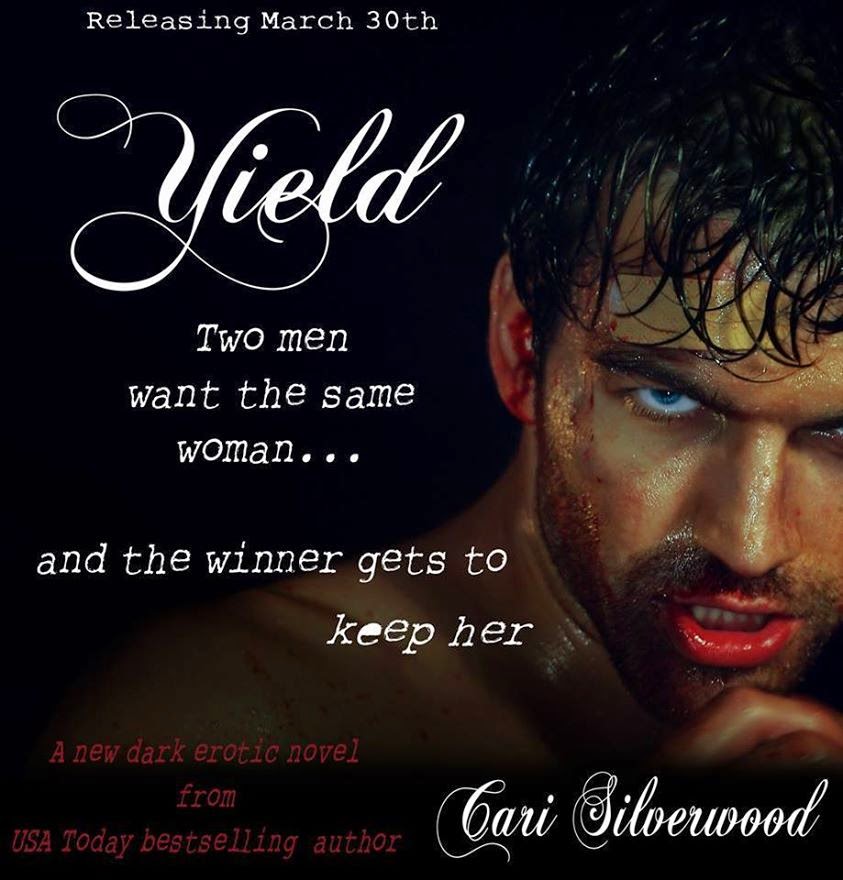 Excerpt from Yield
She met me in the hallway, wearing the blue bikinis with the tassels.
They fit her like a glove, a dirty depraved glove that covered her like body paint, and showed everything that needed seeing when her nipples peaked. I could even extrapolate the shape of her pussy. Not looking would’ve taken a court order.
Fucking hell.
I checked inside my head for those regrets. Conflicted, man, conflicted.
If I had a conscience it was a damn fornicating voyeur of a conscience. My libido was taking me somewhere my brain had rejected.
In her hand was her dress and a red bra, the straps dangling, and those panties – I could just see the edge of them. As I approached, I think my stare was close to nailing her to the wall behind her, because she gaped at me then stepped back and hit that same wall.
“Wait.” She held up a hand, waving it palm out. “Glass, I thought you’d changed your mind. You were so civil at the table.”
Civil? What man was civil?
I’m pretty sure I growled.
My little victim.
In one stride I was in front of her. I could see myself fastening her to that wall with my hands on her neck and my leg between hers. I could feel it. I flexed my fists. Don’t.
I pressed my forehead to hers. What better route into her mind than through her eyes – through the trembling of her eyelashes and the shifting shades of blue in those irises.
“I was thinking of letting you go home untouched. Then…this.”
I trailed my gaze down to her cleavage and beyond. Every curve led to another and downward, her breasts, her hips, that cute belly button I wanted to stick my tongue in, the slight mound of her stomach. She was a sexual puzzle with the best ever prize when you solved her.
Eyes wide, mouth open, she didn’t even bother to try to stop me. Her hands were splayed against the wall either side of her as if she needed that to stop her falling to the floor.
Her clothes had landed in a pile at her feet.
She hadn’t run.
Maybe I could do this without breaking her.
I put my mouth to the side of her face and my lips moved on her ear as I spoke. “You’re fucking with my head. I do all kinds of shit to you, and you don’t run? You don’t scream or panic or look for the door? From now on, if you stay, I’m going to do what I like to you. Fuck etiquette. Hear me?”

Well, wow! That was a hell of a dark ride. It actually took me quite some time to read this book. I started it about a week ago, but had a crazy week, and only had chance to read small chunks each night. Which was agonizing considering how intense this book was.
So although I haven't read the full Pierced Hearts series, I have read Seize Me From Darkness, the book before Yield, and knew some of the characters that were crossing over in to this story. Sometimes, I did feel like I wish I had read the other books in the series, as now and then there were references, that I wish I knew more of what they were about. But, it didn't make any difference to understanding this story. It was easy enough to grasp what was going on.

Wren is a girl on a mission, after losing everyone close to her, she decides to find the person responsible for her fathers death. What she doesn't expect is Glass. After inheriting her fathers millions, Wren has the money and time to employ someone to find out what happened to her father. This is where Glass comes in to it. She doesn't expect to feel the way she does. How Glass makes her feel. After a crazy few days, getting to know each other, and Wren discovering she likes things a little differently, a little darker than she realised.

Wren and Glass relocate to Australia to hunt down the mysterious man, who Glass has told Wren, is responsible for her fathers death. This man they are looking for is not the sort of man you want to cross. He is a mystery, nobody knows who he is, or what he looks like. Only a name, and that he owns some extremely hardcore businesses, Slave houses being one thing he is known for.

What Wren didn't expect, is that this mystery man, had already got her in his sights, and intended to have her.
So after some big planning, and one night where everyone's guards are down, Wren is taken.
That's all I'm going to say. The rest needs to be experienced by the reader. This is a tale of two outcomes. Literally. Two choices for the reader to make. You have Wren, and Glass who is apparently the lighter choice. A man who has a shady past, but obviously cares greatly for Wren and will do anything to get her back. And Moghul, the oddly named, and extremely secretive man. The darker choice. A man with the most darkest of tendencies and predilections, he too has been affected by Wren, and will do anything to have her.

We are shown what Wren is like with both men, how they treat her, and how she is effected by both men. Also what her life could be like, with both. Then we are given the choice. I LOVE books like this, both outcomes are written in this book, and you (the reader) are given the choice of which path, you would prefer to see happen.
Now obviously, I had to read both. There is no way I could read one, and be happy with the outcome. I had to choose, then go back and see what it would of been like the other way.
It was fantastic, and really well done!!

Again, like in the book before this one. (Seize Me From Darkness) The writing style had me hooked,(no pun intended) and I was gripped by the whole world in which we were reading about. It's dark, seedy, dirty. There is no gloss on this world, and it's not prettied up to make it easier to swallow. We get thrown in the deep end, right from the start. Some parts of this story are probably a little hard to read, but if you love this sort of thing. It's perfect.

Again, another fantastic dark story by Cari Silverwood. After reading this book, and still loving her style and easily becoming immersed in this world, I absolutely must, go read the other books in this series!

And...in this real world, she has a lovely family in Australia, with the prerequisite teenager who dwells in the dark bedroom catacombs...a husband who raises eyebrows when he catches glimpses of what she writes, and a menagerie of other animals barking, meowing, and swimming about the place.

Posted by Louise Seraphim Reviews at 5:13 AM