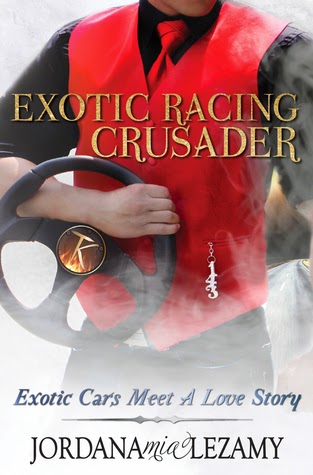 "NOTHING IN LIFE IS A COINCIDENCE"
It was my special day, an occasion to celebrate my life, when my entire future was rewritten and set on a new course with one look in his eyes.

Or was this always part of the destiny that I believed I could not run from?

As I watched him at the ILLEGAL STREET RACING SHOW I never planned on attending – I was certain of one thing about his speed and velocity behind a wheel of a car:

ONLY GOD is capable of catching him when he races.

The moment we met, there was no looking back at a past life that led me down a darkened and lonely road any longer.

Beside him I became queen to the leader of an EXOTIC CARS RACING EMPIRE.

As fate would have it, regrets collected like old friends ready to relive both our most agonizing moments.

It’s always darkest before the dawn, but to see the sunrise, there are SEVEN words of HIS racing team pledge barricading the way at the end of the finish line:

Cauterized words onto his soul that will decide if he is either a villain or a savior.

The ultimate sacrifice of defying his most cardinal law for me must be decided by him alone.
Which will he choose?
Which will he let go of?
Which means more?

This is our journey. This is where our racing legacy with fast cars begin.

This is one of those books, where you may not think it's your thing, or it doesn't sound the sort of story that you could enjoy, but you just have to give it a try. It really was a pleasant surprise.

A whirlwind of exhaust fumes, secrets, lies, love and crazy-hot sex.
A long story, but full of action.
A sigh-worthy love story, that shines amongst the incredibly detailed and clever world of street racers. Not the, 'lets put a spoiler, and go faster stripes, on your mum's old banger car' sort of cars.
But the smoking hot, 'worth more than you get for your kidney on the black market' , types of cars. These bad boys are beautiful and don't just move along a road, they fly!
Mix that with the line up, of incredibly gorgeous, one in every flavour, drivers, in the Griffin League, and you are guaranteed, page meltdowns.
Definitely a unique and exciting new read. I loved it!!

This is a story for fast car lovers. Those who love the sexy, expensive, untouchable cars. Where power is determined by the car you drive. Not just the illegal street racing, but the whole world that surrounds those races, and the untouchable gods, that win these races.
Then, amongst the money, prestige, power, sex, and competitiveness, is Kaidence.
A curvy and stunning woman. Driven and fiercely loyal to those she loves, who lives for her family, and her beautiful ice cream parlour.

Kaidence had decided after almost 26 years, that she would never find love, and was ready to give up trying.
Fate had other ideas.

On the night of her 26th birthday, her close friends and family, take her to her first night at a street race, and her life is just about to completely change.

Titan Thomas, the king of the street racing, underworld. Has always known what and who he wanted, since he was small. He has spent his life, subconsciously aware of something. He doesn't know who she is, but he is aware of a memory. Inhuman eyes, a beautiful shade of blue and green mixed up. So when he sets his sight on those exact eyes, that night at the race. He is determined to make her, his.
So begins a potent and powerful relationship between the king of the road, and his queen.

Although Kaidence starts of self conscious of her weight and appearance, Titan makes her feel beautiful and desirable, and it's with this new realisation, that Kaidence becomes far more relaxed and sure of herself.
It's obvious these two are perfect for each other, and even more so when they find out, just how compatible they are, with the amazing, page melting sex. Considering Kaidence started off a virgin, Titan soon brings her up to speed, and he is most definitely the best teacher. He is one unbelievably hot, alpha. Who knows exactly how to make panties melt in to a pool of goo.

So, obviously the main background of this book is the street racing, and unbelievably gorgeous and coveted exotic cars. Like I said before, this is not a subject I know anything about. I've never read books within this subject, I haven't even watched films with this sort of theme. I'm just not a car girl. But, I was pleasantly blown away, by the detail that went in to this background. JmL had covered every little detail, and created her own unique world, that was sexy, colourful, powerful and very expensive. I could almost hear and feel the sound of these engines.

It wasn't just the cars though, it was also the league. These 7 men, and their brotherhood, they will do literally anything for each other. They are each others family, and nothing will come between them.

It's amazing, how JmL managed to create such a massive cast of characters, all with such individual personalities, and stories waiting to be told. To start with, I had to keep reminding myself which person was which, there was quite a lot to keep up with. But they were all really likable and exciting characters.

There is only one thing I would have to say, that perhaps I would of liked to have seen differently, and that is the length of the book. Don't get me wrong, this book is in no way boring, it is full of action, twists and turns, and amazing shockers! But, I did struggle with the sheer length of it. I found that the first 20% approx, was quite slow, and just an awful lot of intro. Now I obviously continued through, and I am so glad I did, as it picked up speed and was amazingly entertaining. I was even gripping my kindle at the 70% point, and shed a few tears towards the end. All the feels, were out in full force. But, if I was to give my 5p's worth on the length issue, I would of cut a few scenes out. Some weren't necessary, and weren't pivotal to the main story, they just made it very long, and sometimes a bit harder work to get through. If some were cut, it would pack a far more, potent punch!

Again, that is just my opinion. It didn't spoil the book, you just need to be prepared, to have a fair bit of time to get in to it, but persevere, and it sets itself on fire after a while.

A really enjoyable, smoldering hot, intense love story. It made me cringe, sigh, laugh, blush, and well up.
The secrets and shockers were incredible, and it was in no way a predictable story.
Be prepared to develop a crush on racers. It's not going to be a healthy one, and I'm not sure there are many around my neck of the woods. ;)
Seriously can't wait to see what's next in this world, that JmL has created. It's addictive!

Posted by Louise Seraphim Reviews at 10:28 AM