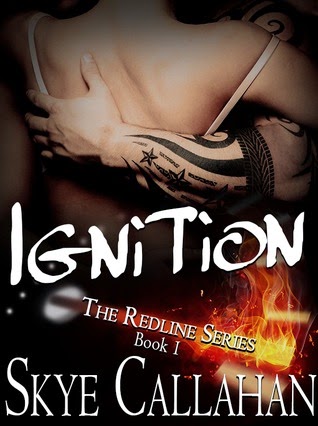 When you’re this close to the redline, there’s no room for error—
—or second chances.

A sought after car thief for hire, Colt will do anything for a high—anything for the deafening rush of blood and chemicals that tames the ongoing anarchy in his mind. Fast cars, pain, alcohol, women… his vices come in many flavors, but one woman tempts him closer to the line he can never come back from. She’ll be his hardest theft yet—an action that will set the looming conflict with his brother on a new and violent path.

Aubrey has two choices. The first she knows too well: the alluring businessman who entwined her in his deceptive plots. The second is a stranger. He makes his promises not with a silver tongue but with harsh, blunt observations that Aubrey can't ignore. Either way, she's caught between two brothers each seeking the other's downfall—and neither has a problem taking her down in the process.
Well, I really enjoyed this. I'm not surprised, I have loved what I read before by Skye Callahan, but it surprised me how quickly I read it.
It was such a quick, easy, gripping read.


A quick read, that borderlines on dark and twisty. It's intense and incredibly sexy. Lot's of potential for some darker scenes, but it managed to stay on the edge.
Loved this view of a specialist club, for those wanting certain services.
Still had a lot of questions, once it finished, but it's left in a place ready to be picked up by the next installment, so I'm hoping all the answers will start to unravel in the next one.
Great, sexy read with gorgeous dominant men, and also some car action if that's your thing.


Ignition kicks straight off in the action, with Aubrey (Sway) getting ready for her first night dancing, at a exclusive club, owned by Devlin. A man who is powerful, and in control of everything and everyone.

We learn Aubrey is in debt to Devlin, and is working at the club to pay him back.
It's in her first night, she meets a mysterious and just as dangerous, Colt.
He plies her with cash, and comes to her rescue when Devlin decides to take a little more,  from their arrangement, on what she owes him.
But are his motives just as bad as Devlin's?

Colt takes Aubrey back to his place to save her from Devlin and sort herself out. Yet he also decides to proposition her, with something she can't refuse, but she would have to give up something just as big.

This book is a serial novella, so it's fast paced, potent, and packs a punch.
Lots of secrets to unravel and be revealed. Lots of questions not yet answered. But this is just the start of this series, and I think it's just getting good.
I'm not generally a fan of books that have car/racing storylines, but I did love another of this author's series, so I thought I would give it a go regardless, and so far the car theme doesn't actually dominate the story, but what parts are focused on cars, are actually really good and have great atmosphere.

Aubrey and Colt are both characters that have plenty of secrets, and I want to get to know more about them both. Even Devlin, seems to be quite intriguing.
The writing style was as flawless and captivating as it was in Irrevocable.
I loved how this book kept hinting at darker things to come, and how the possibility for more, was always there taunting the reader.
Of course the hotness levels of Ignition were through the roof. It's obviously going to be an extremely sexy series, but done in a unique and addictive way.

Very excited to read more on this series.
Recommended to anyone who loves quick, hot reads, but also likes things a little darker and more brutal.
4 Stars.

**I was given a copy of this book in exchange for a fair and honest review**
Posted by Louise Seraphim Reviews at 5:33 PM