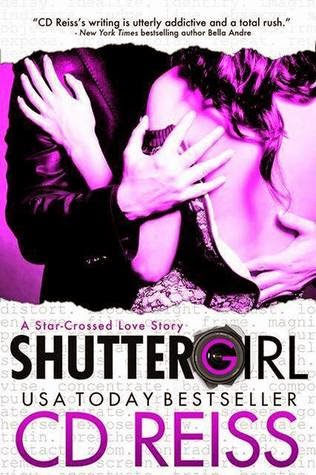 I am not hurt.

I don’t need a second chance with him, or a life I thought I had.

While he was out forgetting me to become a movie star, I was building a career out of nothing. A career as a paparazzi, but a career. For a foster kid who bounced around every home in Los Angeles, that wasn’t easy.

This camera is all I have.

He’s nothing to me. Every time I take his picture and sell it, I remind myself that I did it all without him or his approval, his cinnamon smell or his clear green eyes. He lights up the screen like a celestial body, but he’s nothing but a paycheck to me.

He can throw my camera off a balcony, and nothing has to change. We can stay king and queen of the same city, and different worlds.

Except this is Hollywood, and here, anything can happen.

Well, this was a completely different read.
So before I even start, I probably should point out, that the Songs of Submission/Corruption/Perdition are some of my favorite series, ever!


Shuttergirl, is a unique and different story. It's a standalone, and not the usual dark and dirty stuff that CD Reiss usually writes.
Of course there is still a hot element to it, and some grit around the edges, but it's a lot more focused on the story, with an incredible romance.
The writing style, is still the same addictive style as anything else of this authors, that I have read. You can tell straight away, with certain tell-tale signs that come through strong.
But this book has taken a different direction. It is far more focused on underlying messages. Second chance love. The actual person that lays beneath the persona the world sees. What you are willing to give up, and what you would be prepared to do, for love.
A lot of quite deep and meaningful subject matter, underneath the flashing lights of the pap's, and the lure of the famous.
It shows a different take, on the life of the rich and famous, and those who live to share them with the world.
Fantastic story, and awesome ending, for the sap that I am. :)


So, I had heard that CD Reiss was releasing a new standalone, and it was going to be very different from the Songs series, and her trademark style. I was very nervous, but also really excited.
One thing I absolutely adore about CD Reiss' books is her style of writing. It floored me from the very first book I read, and it never faltered. It was captivating and raw, dragged you along with the characters, and left you questioning everything.
So I had no doubts about trying something new, as I knew CD would bring it. Her writing style, and incredible characters, could rock a book on their own, just reading the tv guide.

The subject was a tricky one for me. And probably what made me nervous. Actors and Paparazzi. Not something I generally care for. It always feels fake, forced and too much showing off. Hard to see the real people behind it all. So with that in mind, I started reading, peeking through my fingers. (Not really, my eye sight is rubbish)
Not that I really needed to worry, this is a CD Reiss book. It's like she took the actor and stripped him down, and found the person and soul beneath the glam, glitz, money, and fame.
Surprisingly, I actually really loved Micheal (the hot actor) he didn't seem like how you would imagine an actor of this generation to be.
He was obviously ticking along from day to day, doing what he was good at, and what was expected of him. But he didn't seem truly happy. Not until his past came back to surprise him.

Then there is paparazzi girl, Laine. Beautiful, determined, hungry for what she was good at. She'd had an awful start in life, but it only made her stronger and determined. I thought she was incredible. Loved her, and her attitude. She rocked at what she did, knew absolutely everything, there was to know, about her profession. She never let anything get in her way, unless she saw him. Her past.

Michael and Laine, knew each other from way back when. He was in a private school, placed there by actor parents. He was rich, entitled, and expected to perform as required.
She was in between foster homes. Having been taken in by her latest, a rich couple, looking for something to keep them together. They placed her in this private school, and out of her depth. She hated it, and struggled to keep up, with where she was placed.
They met in the hours that she studied to catch up, and he played Tennis. She would sit and watch him, he tried not to watch her back. That lasted for 6 months, then he left. Accepted for a role in a film. Moved on.
That's where everything changed for Laine. Life would never be the same, and she would pay the price, for some of the choices, she was about to make.

Fast forward 9 years. He is the golden boy of movies, she is one of the best, and most famous in her circles, of Paparazzi. She see's him, and loses focus when he is in front of her lens.
He sees her, but doesn't say anything. Just looks. Until one day, he acknowledges her. It all changes from there.

Like I said, I wasn't sure I was going to enjoy this story. But my own personal tastes aside, this was a fantastic story. When you don't focus on anything, and just read the story, you realise there is so much to take in, and this story is so much  more than what you first imagined.

Stripping the characters of their work, and everything they know. You are left with an incredible love story, a second chance to beat all other second chances. Plenty of angst, and drama. Also some grit and shady parts, that give this book it's edge. Making it not just a quirky and unique romance, but so much more. Making it stand out from all other books in the genre. Whatever genre it actually falls in to. I have no idea. I just know, this is a book that stands out. I've not read anything else like it, and lately, that statement is getting harder to say. Not with Shuttergirl though, it was an easy observation to make. It really is a fresh and new story, with addictive characters, and the reliable, addictive writing style, that I love and never tire of.

Being that it is a standalone, and the fact that above all else, it's a romance. The ending was bound to be important, and to be honest I didn't really have a clue where it was going. You never really can tell with a book written by CD Reiss, but I'm happy to say, after all the angst and drama, the ending was perfect. A hugely satisfying end.

Definitely recommended to not just fans of this Author, but to everyone who loves a good romance. With drama, intrigue, secrets & reveals, but with a huge feel good vibe, by the end.

'I believed love was forever.'

Posted by Louise Seraphim Reviews at 8:14 AM