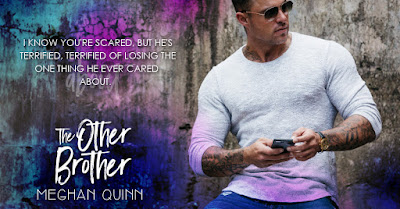 I got the call. The dreaded call every child fears. My dad wasn’t well, and the man who had always been my everything needed me.

There was only one thing to do; pack up and head back to my hometown. I had finally made my dream life in the city with the great job and loving boyfriend. But was there really a choice not to go?

I found a wonderful job, a quaint house to rent, my boyfriend was working on joining me in Binghamton, and my favorite pizza place was only miles away. Life was good.

Until I met my neighbor.

It's been three years since I'd seen Aaron Walters, and my God is he all kinds of sexy gorgeous. Figures. He was supposed to be my forever, the man I grew old with, but he had different plans. How can a man who ripped my heart apart still trip me up? How can he make me still want him now more than ever?

Now two men own my heart. The question is, which brother will I choose?

Why? Why does he have to magically appear in my life? Moving back to Binghamton, I thought about the possibility of maybe running into him, but I thought it unlikely, something that would never really happen.

Boy, was I wrong.

What a sick joke life is playing on me.

Aaron Walters, the boy who broke me into pieces is my neighbor.

I can’t fathom the impact I feel already.

Seeing him in hip-hugging jeans and a tight, plain shirt did a number on me. It kept me up all night as memories of what we used to have flooded my mind.

The way he used to kiss my neck.

The way I felt so protected in his arms.

Too bad his arms couldn’t protect me from his devastating, heart-breaking self.

And hell, he looked good. Too good.

He’s always been tall with handsome features and a chiseled jaw, but now he’s bulked up to the point that I could see his abs flexing under his shirt, the same shirt that stretched over his biceps.

But it wasn’t his muscles or handsome features that once again made my heart ache, it was those eyes. So bright, so blue, so kind, but still so sad. It reminded me of the first day I met him, of the day he stole my heart from every other man on the market.

Broken, unsure, yet yearning for love. It was all there, and like experiencing a moment of déjà vu, I was transported back into a time when I felt invisible, like I could conquer anything with him at my side.

Once again, I was wrong.

“If you love someone let them go, if it’s meant to be they will come back, 5 stars.”

The Other Brother is a standalone but if you’ve read My Best Friends Ex or Twisted Twosome then you know who Aaron (Smalls) is and this is his story. Thanks to Quinn’s story telling I always got the vibe that there was so much more to Aaron then what was let on and I wanted his story bad. I knew from the dedication alone that this was going to be one heck of a story and Quinn didn’t let me down.
Aaron is as loyal and honourable as they come. He’s the quiet friend who speaks up when he needs to. I always had the feeling that he was a little sad and The Other Brother shines a light on that. The ones he’s loved most he’s had to let go, his brothers and the girl. Aaron was once so in love with a woman that when she had a choice to stay or go that could make or break her career he let her go. He wanted what’s best for her even if that wasn’t with him. Well now she’s back.
Amelia knew love once. That love was wild and freeing. Her gave her wings and she kept him grounded. They were the perfect match, until he pushed her away. Now she has a new love that is no way similar. It’s safe, predictable, and in my opinion boring. When Amelia goes home to spend time with her ailing father she didn’t expect to see Aaron let alone let him work his way into her life. Will she choose the safe and predictable partner or will she go with the one who showed her what love was?
I loved everything about this story. Aaron sent Amelia away because he knew she needed to go. Yes, they could have stayed together but they weren’t ready for that, they were basically kids. To me that’s what true love is. Always wanting what’s best for someone, even if that doesn’t include you. That is Aaron down to the core. He never thought he was good enough so he let her go but in doing so he never stopped loving her. Aaron is passionate and insecure. He is the kind of guy most girls dream about.
There is no cheating in this story if that is something you’re worried about. There are some twists and turns in The Other Brother that making you think wtf. You get a little sneak peek of the couples from My Best Friends Ex and Twisted Twosome. The Other Brother left me satisfied yet hoping that maybe Quinn will be nice enough to give us Trey’s story.

Here are two quotes from the story that made my heart swoon;
“Let your heart beat, let it feel, let it soar, let it love again.”
“What I want for Christmas is another shot at dating that beautifully perfect woman right there.”

Born in New York and raised in Southern California, Meghan has grown into a sassy, peanut butter eating, blonde haired swearing, animal hoarding lady. She is known to bust out and dance if “It’s Raining Men” starts beating through the air and heaven forbid you get a margarita in her, protect your legs because they may be humped.

Once she started commuting for an hour and twenty minutes every day to work for three years, she began to have conversations play in her head, real life, deep male voices and dainty lady coos kind of conversations. Perturbed and confused, she decided to either see a therapist about the hot and steamy voices running through her head or start writing them down. She decided to go with the cheaper option and started writing… enter her first novel, Caught Looking.

Now you can find the spicy, most definitely on the border of lunacy, kind of crazy lady residing in Colorado with the love of her life and her five, furry four legged children, hiking a trail or hiding behind shelves at grocery stores, wondering what kind of lube the nervous stranger will bring home to his wife. Oh and she loves a good boob squeeze!