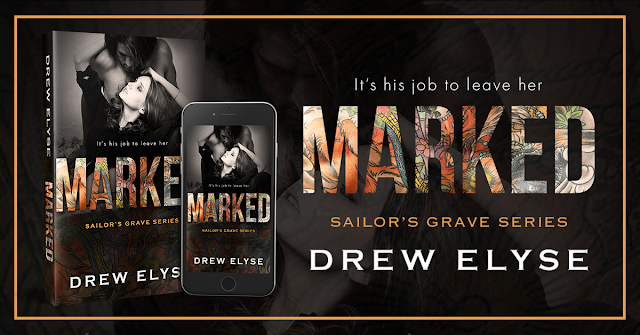 We are so excited to be sharing this excerpt from Drew Elyse's upcoming MARKED with you today. This new standalone contemporary romance kicks off the Sailor's Grave series and will be released May 17th exclusively on Amazon.

“MOVING ON” IS JUST ABOUT ACTING THE PART.

So I let them.
Everyday is about putting on a face,
pretending to get over the loss of my husband.
And every day is a lie.

UNTIL MOVING ON IS A TEMPTATION THAT CAN’T BE DENIED.

I’m not about to claim I’m a genius,
unless we’re talking with a tattoo gun or woman in my hands,
but I’m smart enough to know the beauty serving up my cupcake fix is off limits.

Really, I know.
Too bad the lure of putting a real smile on Kate’s face is so strong.
When she visits Sailor’s Grave Tattoo Parlor,
I can’t help but want to leave my mark.


Grab your copy of MARKED today! 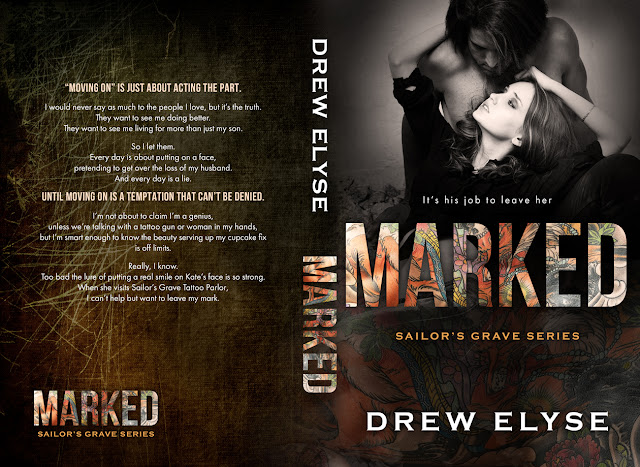 Read an excerpt from MARKED 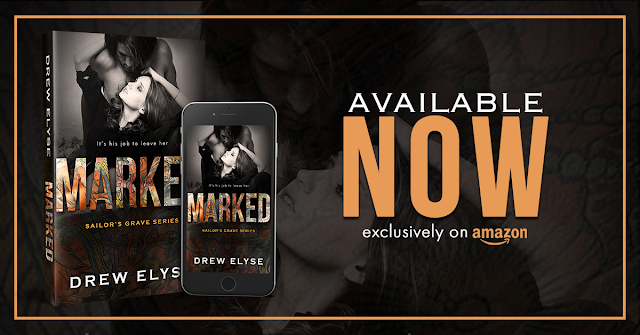 Marked is the first book in the Sailors Grave Series. This book follows the life of Liam and Katie. Taking us through their journey of Love and loss.

Katie has lost a part of her world that was meant to be forever. She has the support of her Brother in law who brings them into his Savage Disciples family without hesitation.  She smiles and plays the part of the widow that is moving on with her life. Liam is a talented tattoo artist who is going about his life, loving his family and trying to stay away from the sweetest treat, failing miserably.

Liam wears his heart on his sleeve, he shows a side of himself that is full of emotion and bares his own personal loss and struggles. Katie’s character brings grief and loss to life in the book, she is independent and a protective mother.

The chemistry between Katie and Liam is there from the start. Their friendship opens them up to a level of intimacy that brings you the full love story feels. Leaving you wanting to be swept off your feet. Can Katie move past all her fears and live the life both her and Owen deserve?

Drew’s writing is strong throughout this book. The emotions that both Katie and Liam go through makes you feel that you are right there feeling them too. She seamlessly goes between the 2 characters with ease making the book flow into a love story.

This is the first book of the Sailors Grave Series, a spin off from the Savage Disciples. Having read the series I was familiar with the characters that were involved throughout the story. It wasn’t a necessity to read the series but I would recommend as they are just as good as Marked. Drew has set solid foundation for the series and I cannot wait to see where she takes Book 2, Jess’s story.