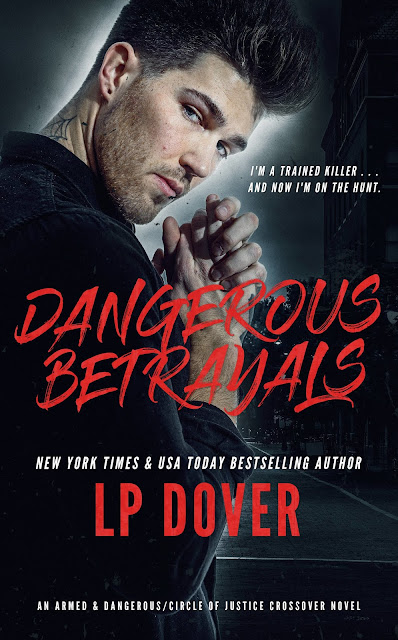 From New York Times and USA Today bestselling author L.P. Dover comes the crossover fans having been waiting for! Beloved characters from her Armed & Dangerous and Circle of Justice novels come together in this tantalizing new series!
A stranger waiting in the dark.
A ritualistic attack.
A wrongful arrest.
After surviving an attempt on her life, Kennedy moved to Vermont in hopes of putting the nightmare behind her. The police assured her the assailant was behind bars. They were dead wrong. The truth revealed itself in a rash of grisly murders. Each victim bore a striking resemblance to Kennedy. Each killed in the same fashion as her attack.
Launching a full-fledged manhunt, the police called me in. My name is Reed Chandler, and I’m an expert on tracking the behavior of the deranged. It doesn’t take long for me to realize it all traces back to Kennedy. The killings are carving a path across the country, leading straight to her.
Determined to keep her safe, I refuse to leave her side. Am I getting too close? Losing myself in the alluring charms of the school teacher? I don’t care. I’ll do whatever it takes to protect her. Let the killer come. The tables have turned, I know his plan.
What he doesn’t know is that I’m a trained killer... and now I’m on the hunt.

Reed is approached by a family acquaintance about a case he needs help with. Reed is the best of the best. He can find anyone and take them out. When he meets the killers only living survivor, he never expected for her to take his breath away. Will he be able to get rid of the danger surrounding her or will he be too late?

Kennedy’s life has been in a tailspin since her mothers’ death and her attack. When John shows up with a friend and they tell her its not over yet she doesn’t know what to think. The only thing she knows is that she’s safe with Reed. When her feelings for him start to evolve is it because its real or because of the close quarters. Will she get the answers she needs? Only one way to find out.

I liked Reed and Kennedy. They clicked well. I liked the secondary characters who stayed on the outside of the circle. The only thing I really didn’t care for was how blasé they were about Reed’s job. Its one thing working for the FBI but the other part I thought they were way too open about and I found it weird. Other than that I liked the mystery suspense portion of the story. 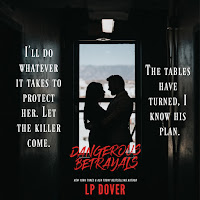 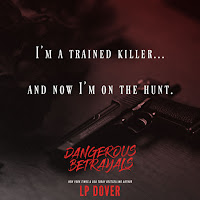 Free in Kindle Unlimited
Also available in paperback: https://amzn.to/2xJa6zO
EXCERPT
Her eyes blazed with anger. “Why didn’t John tell me this could be done?”
“Because he doesn’t know,” I answered. “Not many people do. We use special government technology. With only a handful of people knowing how to access the satellites. Even so, we can’t figure out every single murder case. There’s just not enough time in the world. It’s important we keep this knowledge contained otherwise it could be used against us.”
She scoffed. “So what you’re saying is that in order to get the special treatment, I have to be someone high up? Like the president or someone with a butt ton of money?” Her hand shook and I could see the rage behind those hazel eyes of hers.
All in all, she was right, but I couldn’t tell her that. But mostly it was because of the safety issues of this type of technology getting into the wrong hands. “That’s not what I’m saying, Kennedy,” I said, hoping to deflect her anger and not sounding like I’m appeasing her. “I’m sorry this happened to you, but I’m here to help. Even looking at the satellites doesn’t guarantee we’ll find the killer. It takes a lot of calculated guesses and that’s where I come in. I go with my gut.”
She blew out a frustrated breath and her eyes softened. “I’m sorry. I wish you knew how hard this was for me.” I understood what she was going through as I’d seen it time and time again. Being a victim, and trying hard not to be one is exhausting and I could see it was taking its toll on her.
I placed a hand over hers, and something about it felt right. “We’re going to find that piece of shit, I promise. Once my package gets delivered today, I’ll set up the cameras around your property so we can keep an eye on everything while we’re gone. And as soon as we get to Wyoming, I’ll use every single resource I have to figure this all out.”
Standing up straighter, she lifted her chin and nodded. “Good. And I want to be right there to help you.”
She looked at me expectantly and I narrowed my gaze, wondering what she had on her mind. I already knew it was something she wanted to keep from John. Didn’t know if that was a good or bad thing, but I had a feeling it was the latter.  “Yeah, about that. What do you want exactly?” I asked.
Her eyes darkened. “I’m not waiting for that psycho to hunt me down again. I want you to teach me how to kill. That way, the next time I see him, he’ll be on the receiving end and not the other way around.” She looked down at the river, her body tense. “I want to look him in the eyes when I kill him. You’re the only one who can help me get away with it.”
Yep, it was definitely the latter. I stared at her in disbelief, but also in complete awe. I could get into some serious trouble for helping her. Was it good to give in to revenge? No, but in her case, I’d be the same way if someone killed my mother. She deserved to get her revenge and the killer deserved everything she could dish out and then some.
If it was anyone but Kennedy, I wouldn’t do it. But for her, it would mean closure — I could see that now.
The decision was made.
ALSO AVAILABLE 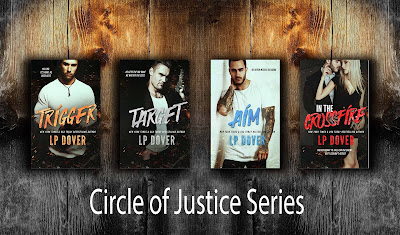 AUTHOR BIO
New York Times and USA Today bestselling author L. P. Dover is a southern belle living in North Carolina with her husband and two beautiful girls. Everything’s sweeter in the South has always been her mantra and she lives by it, whether it’s with her writing or in her everyday life. Maybe that’s why she’s seriously addicted to chocolate.
Dover has written countless novels in several different genres, including a children’s book with her daughter. Her favorite to write is romantic suspense, but she’s also found a passion in romantic comedy. She loves to make people laugh which is why you’ll never see her without a smile on her face.
AUTHOR LINKS
Facebook: https://www.facebook.com/lpdover
Facebook Group: http://bit.ly/2hlE3vs
Website: http://www.lpdover.com
Twitter: https://twitter.com/LPDover
Goodreads: http://www.goodreads.com/author/show/6526309.L_P_Dover
Amazon: http://amzn.to/1onBUPK
Pinterest: http://www.pinterest.com/LPDover
Email: authorlpdover@gmail.com
Newsletter: http://eepurl.com/EbduX
Bookbub: http://bit.ly/2eXg0o2
GIVEAWAY
There is a giveaway for 2 x $25 Amazon gift cards + 3 ebooks of L.P. Dover’s – winner’s choice (5 winners total)
https://www.rafflecopter.com/rafl/display/e87f05d52