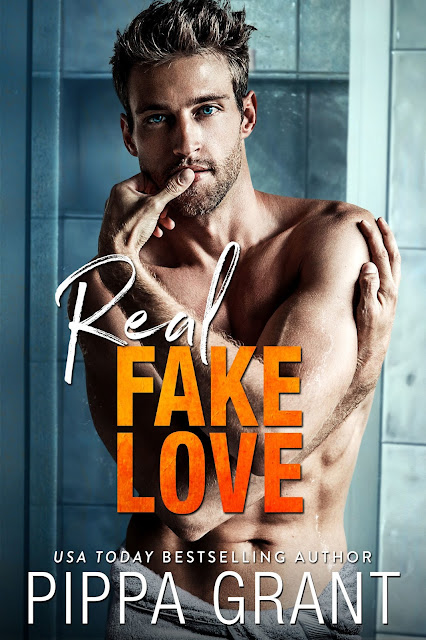 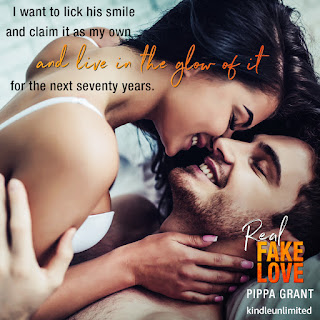 If people have polar opposites, Luca Rossi is mine.
His butt is in the baseball hall of fame. Mine’s comfortably seated in the hall of lame.
When he’s not snagging fly balls out in center field, he’s modeling in shampoo commercials. I once jammed my own finger while stirring cookie dough, and sometimes I forget shampoo is a thing.
He’s a total cynic when it comes to love.
I make a living writing love stories.
But after my latest broken engagement (no, I don’t want to talk about how many times that’s happened), it’s clear he’s exactly the man I need.
If anyone can teach me to be the opposite of me, it’s him.
The first thing I want him to teach me?
How to not fall in love.
And as luck would have it, he’s in desperate need of a fake girlfriend to get a meddling grandmother off his back.
We couldn’t be more perfect together, because the last thing Luca Rossi will ever be is the next man to leave me at the altar.
Or will he?

Real Fake Love is a line drive straight to the heart featuring a grumpy athlete, a jilted bride, a fake relationship, and the world’s laziest cat. It stands alone and comes complete with sibling rivalry, the world’s most awkward shower scene, and a sweetly satisfying happily ever after.

Lets just start by saying you need to scroll to the top and one-click Real Fake. With the way the world is right now we could all use a laugh and Grant is always willing to give us one. Luca and Henri have by far the most unconventional meet-cute I have ever read and I was here for it. Cheering for them along the way. Real Fake is worth the money, trust me.

Luca didn’t want to go to the wedding of his childhood friend but he went. He didn’t expect to get caked by the jilted bride but he did. He didn’t expect his Nonna to give him the Eye, but she did. Seriously how much more can a guy take when he’s playing the most important baseball season of his career? Through it all Henri makes him laugh. She makes him feel things, the question is will he let her in?

Henri loves love. So much so she’s been engaged more than one woman should ever be engaged. She doesn’t want to fall in love with Luca, it’s honestly the last thing on her radar. But some where along the way of their weird friendship she starts to get feelings for the guy. Will he be the next guy to break her heart? Only one way to find out.

Henri, in the middle of Chapter Four...

It's probably weird to be sitting on the doorstep of the man I cyberstalked after his whole love sucks speech after my failed wedding. But I won’t apologize for waiting for Luca here at what I think is his house, because you don’t get what you need in life if you don’t go for it.

Still, maybe Dogzilla and I should be waiting in my car instead? At least that way, I could turn on the radio while we wait. And the air conditioning.

I’m about to move to the car when a clunker chugs around the corner, one headlight out, and turns into the driveway.

This is definitely the wrong house.

I’m sitting on the porch of a stranger’s house, hoping that’s a woman driving, because if it’s a woman, at least I know I won’t be in danger.
Of falling in love with her at first sight, I mean.

The engine shuts off, and while I don’t often trespass at midnight, I have this feeling that jumping up with Dogzilla and making a run for it right now is exactly the wrong move. A well-timed, "Oh, sorry, I thought you were someone else," will give us all a laugh, I’ll take my cat and leave, and then two complete strangers will have a weird story to tell their friends over margaritas—or an iced tea, in my case—and huh.

This would make an excellent meet-cute for my friend Dorothea’s next steamy romance novel. I’ll have to drop her a note too.

The occupant of the car is still sitting in it, and the figure illuminated by the street light looks too big to be a woman.

He also seems to be—

Is he hitting his head against the steering wheel?

If I picked the house of a nutjob, all bets are off.

"Be ready to run, Dogzilla," I whisper.

My lazy cat doesn’t move, and instead snores in my lap.

Easier this way anyway, since it’s not like I can count on her to follow alone when I take off running at full-steam.

Which doesn’t happen all that often, if we’re being honest here. I’m a writer, not a runner.

The way his hair is moving—

That is Luca Rossi.

I rise, cradling Dogzilla, and when Luca looks my way, I give him a finger wave and a smile.

The light isn’t bright enough for me to see what he’s saying, but his lips are definitely moving, and if I’m not mistaken, he’s wearing the same long-suffering expression my father usually has when I tell him I’m engaged.

It might also be remarkably similar to the expression Luca was wearing when he recognized me at Duggan Field earlier today too.

Not my intention to ambush him at work, I swear. I was curious about the ballpark—I’m curious about a lot of things—so when I caught wind on social media of a writer organization that was touring the park, it was easy enough to get here in time today to join the group.

And it was fascinating to see where the players work out, to smell the chairs the announcers sit in, what it feels like to stand in the dugout, and hear how many light bulbs have to be replaced every day.

There’s a pop and a creak as the car door swings open, and I suddenly desperately need to know why Luca Rossi, millionaire sports star, lives on a grocery store clerk’s salary.

It’s one of the things my ex-fiancé Kyle liked about me.

My brain hears what the hell are you doing here, and why are you between me and my bed, and I’m not asking out loud because I don’t honestly want to know.

Plus my lifelong relationship with my father.

"Hi, Luca! Great game tonight. That catch you made in center field was like—"

Okay, yeah, he had an easy game. "How did you know where the ball was going to be? That’s like—it’s like you’re psychic."

"It’s called being a professional." He squeezes his eyes shut briefly, opens them, eyeballs Dogzilla in my arms, and then sighs again. "To what do I owe the pleasure of your company tonight?"

I know it’s probably me.

But that’s no excuse for not forging ahead. I didn’t come all this way to chicken out. "You remember the last time we saw each other?"

"This afternoon in the clubhouse?"

"I liked your hat, but I meant the time…before that."

He closes the distance between us with three casual steps. "Nope."

And I go momentarily speechless as a waft of something delicious teases my nose.

But only momentarily. A quick recovery is a gift. Or possibly a defense mechanism. "The time we were together…in that town…with that big monument…and the event thing…"

"The event thing that didn’t—"

"I’m trying to block it from my memory."

"That I wouldn’t want to remember your ruined wedding, that you like to redecorate people with dessert, and that your ex-fiancé is the first man that my mother’s dated in three years and I might have to start calling him Stepdad?"

My heart also weeps because yeah, still not over seeing Jerry lock lips with a woman who could’ve been my mother, and hearing that it might actually be going somewhere is salt in the wound.

"So, no, Henri, I don’t remember the last time we were together. At least, I won’t, once I get inside and pour myself a large enough vodka tonic. Care for one?"

I cut myself off when one of his brows rises infinitesimally, and then I gasp. Of course he knows I’m allergic. We had an entire conversation about it. "Are you trying to send me to the hospital?"

"No, but I am trying to get into my house. Alone. Preferably without the sad panda thoughts I’d finally managed to shake before you showed up today."

He swipes a hand over his mouth and looks up at the sky, and I’m certain he’s not stifling a smile.

Probably the exact opposite.

Time to forge ahead. "I’m here because I need your help."

"And now I pay the price for my sins," he mutters.

I’d ask what his sins are, but my google searches were very thorough.
Normally, he really would be the last person on earth I’d turn to for help.

"I don’t want money or anything like that. And I’d rather no one know I’m here, so I’m not after your fame either, though I wouldn’t mind some tips on how to get my hair as good as yours always is. I’ve tried Kangapoo before, and—wait. Sorry. Off-topic. I need you to teach me how to not fall in love."

Pippa Grant is a USA Today Bestselling author who writes romantic comedies that will make tears run down your leg. When she's not reading, writing or sleeping, she's being crowned employee of the month as a stay-at-home mom and housewife trying to prepare her adorable demon spawn to be productive members of society, all the while fantasizing about long walks on the beach with hot chocolate chip cookies.

There is a giveaway for a custom backpack filled with Pippaverse gear (1 winner, open internationally)