Right then, as i have set myself the task of catching up on some series. I better choose my first one in time for next Saturday (12th April) Tomorrow is a wee bit too soon for me. ;)

So my first catch up is quite easy as I only read book 1 back on March 11th, but it did have a crazy ending that i need to find out what happened. 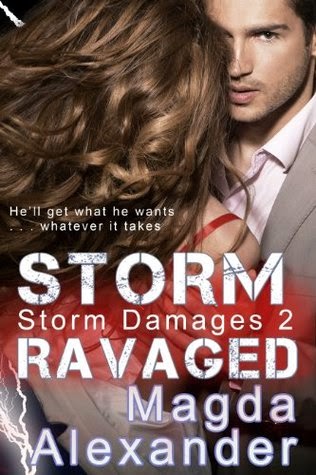 The Stunning Sequel to Storm Damages
Warning: This is a hot steamy read with explicit language and sex scenes. For mature audiences.
A Desperate Woman...
Pregnant with Gabriel Storm’s baby, Elizabeth Watson dreads seeing him again. After all, three months earlier she walked out without telling him about his child. But he knows and demands marriage. Something she can’t do. If she does, his mother would reveal a family secret which would destroy everything Gabriel cherishes.
A Determined Man...
Hell bent on marrying her, Gabriel will do anything to get her to agree. So he fashions a solution to convince her, a solution crafted from lies and deceit. But he's playing with fire. For if she discovers his subterfuge, he would lose not only his child but the woman he can’t live without.


So, that's the cover and Synopsis for book 2. Plus a link to my review of Book 1 - Storm Damages.
Now i need to crack on and read it. ;) Review to follow on Sat!

Posted by Louise Seraphim Reviews at 10:55 AM