About SIN WITH ME

The past she can’t remember. The secret he hides. And a love that’s worth risking it all.
After a devastating car crash stole both her family and her memory, Grace Stanton was left with no past and an uncertain future. Now Grace likes to keep things simple. No sleepovers, never date a guy more than a month, and never, ever fall in love. Which is exactly why Grace avoids Bad Habit’s lead guitarist, Brody Scott, at all costs. The green-eyed, sexy-as-hell musician has “trouble” tattooed all over him, and Grace isn’t taking any chances with her heart.
Brody knows he doesn’t deserve an amazing woman like Grace—her creamy skin, red hair, or that smart mouth that fuels his every fantasy—but there’s something between them that’s more than chemistry. Something real. He’ll just have to convince Grace that he’s worth the risk—and hide the secret that haunts his worst dreams. But when fate plays a cruel hand, Brody’s darkest sin suddenly threatens his last chance at redemption…and the life of the woman he loves.

Add SIN WITH ME to your Goodreads list here!

Get your hands on SIN WITH ME now: Kindle | Print | Audible

Missed the first two books in the Bad Habit series? Read them for free with Kindle Unlimited or grab them for just .99c for a limited time each! Find out more here.

They call Grace the ice queen. She’s put together, well off financially, and keeps people a good arm's length away. Grace doesn’t do relationships or commitment. When she was eighteen she was in an accident that caused her to lose her memory making her fear ever getting involved with anyone aside from her two best friends.

Brody has wanted Grace since the moment he met her almost two years ago. He knows if anyone was made for him its Grace. But his past haunts him and some things can never be unseen. What happens when his and Grace’s pasts collide. Will the bad boy rocker get the ice queen?

Sin With Me is hot. I’m pretty sure Brody and Grace are my new favorite couple in the series. In the bedroom things aren’t exactly vanilla, but not not red room status. But holy guacamole is it hot. You also get to catch up with the friends and band from the previous two books. Geissinger definitely didn’t disappoint with Sin With Me.

Here are a couple quotes I enjoyed from Sin With Me;

“The reality of who and what Grace Stanton is would melt the heart of even the most zombified, frostbitten White Walker George R.R. Martin could ever conceive.”

“You were right when you said I was afraid. I’ve gone skydiving and hang gliding and bungee jumping and climbed the highest summit of Mount fucking Kilimanjaro during an ice storm with a guide named Rooster who was drunk the entire time, and I’ve never been as scared of anything as I am of this thing I feel for you.”

“The best churches don’t have stained glass windows or statues of dead saints or even ceilings and walls. You don’t need a building to find forgiveness. You don’t need communion wafers and holy water to be blessed. And miracles are everywhere. All you have to do is look.” 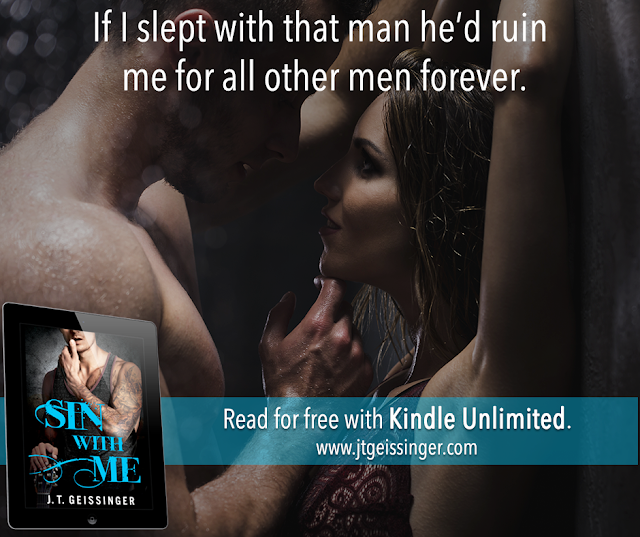 J.T. Geissinger is giving away four awesome prize packs! Enter via the rafflecopter below:

A former headhunter, J.T. Geissinger is the author of more than a dozen novels in contemporary romance, paranormal romance, and romantic suspense.

She is the recipient of the Prism Award for Best First Book, the Golden Quill Award for Best Paranormal/Urban Fantasy, and is a two-time finalist for the RITA® Award from the Romance Writers of America®. Her work has also finaled in the Booksellers’ Best, National Readers’ Choice, and Daphne du Maurier Awards.

Join her Facebook reader’s group, Geissinger’s Gang, to take part in weekly Wine Wednesday live chats and giveaways, find out more information about works in progress, have access to exclusive excerpts and contests, and get advance reader copies of her upcoming releases.