From New York Times & USA Today Bestselling author Clarissa Wild comes the highly anticipated Dark Erotica series: Delirous.
For the first time ever, and for a very limited time, the complete Delirious Trilogy is available in one boxed set edition.
~ SEEK (prequel)
“All I remember is him: Sebastian Brand, my savior.”
Lillith’s world changed forever when she came home from vacation. Her life was ruined, her heart shattered. Putting her trust in Sebastian Brand has been the key to her survival … but at what cost?
~ SNARE (Book 1)
“Claimed by a man with the exterior of an angel and the mind of a brute, I will do anything to unveil his secrets and face my own demons.”
Taken.
Humiliated.
Used.
A body in exchange for freedom. A heart in exchange for truth.
Life is never a given. Only a certain death.
~ SEIZE (Book 2)
“She thought she could run, but there's nowhere to hide. You think I’m the monster? Think again.”
Sebastian wants only one thing: Power. Claiming Lillith is the key, but her horrible past and uncertain future are undeniably tied to him. When the choices you make decide your fate, the line between good and evil blurs. In order to play this game, sacrifices must be made.
~ SCORCH (Book 3)
“I am the forgotten one, the girl who was left for dead. I remember everything. Their faces. Their touch. Even their smell.… I will kill them all.”
Sweet revenge keeps her alive … and drives her to kill. Finally, secrets and revelations come to light after a long and grueling journey. Every choice has led to this moment, but no one is prepared for the unfathomable consequences of life and death. Will love be enough to overcome the pain of the past?

OMG That was a box set of crazy! Good crazy, but definitely crazy! And also stupidly sexy crazy!

Delirious box set is 4 books, a novella prequel, 2 books following 2 characters, then 1 book following another character. So it was quite a big story, and I read it all in a couple of days.
I had read Killer by Clarissa Wild, and knew she had a clever way of turning a dark, and gritty story into a big ball of confusing crazy mystery, and I loved it. So starting this box set, I had no clue what to expect.

Seek, the prequel tells the story of Lillith while she is in a mental institute. I'm just going to say, this was probably the most confusing of all the books, and made my head hurt the most. Clarissa Wild has this style, within this series, where she time jumps. So you will start off in one place, and then jump back to when something happened, then forward to present, and sometimes to a completely different time. And, it can be hella confusing, crazy confusing, so you need to really concentrate and pay attention. Which was even more hard in this prequel, as it's supposedly when the main character Lillith is at her most lost and confused, so being in her mind at that time, is enough to make you sit in a perpetual state of wtf?? But it's very catchy, sharp writing, the background is completely clever and addictive. I didn't know enough of the characters, to know if I liked them yet, but the story was compelling enough to grip me.

Snare, book 1 and the first main book. So now we are in to the main story, and Lillith is out of the mental institute, and starting to piece parts of the last 6 months together, with the help of Sebastian, the sorta hero, sorta evil bad guy. It's still too early to tell.
So the too-ing and fro-ing in the time line is still happening, and it's still confusing, but now that Lillith is out of the mental institute, it's far more clearer information, and easier to tell what is real.
Now as we are getting the story in pieces, and it feels like a giant mystery, secrets are unravelling at lightening speed, and the background to what is going on, is starting to come out. Now I can't explain any of the background story, which is what happened to Lillith and why she was put in the mental institute, and how she came to meet Sebastian, but what I can say is, WOW this background is seriously clever. Like genius idea clever. I love how it unraveled, and how detailed it all is. I wish I could say more, but seriously it can't be spoiled. It's dark, nasty, and stupidly bad, but so clever!!
I'm also starting to enjoy the characters more now. Lillith is finding her real self, and without all the craziness, and the confusion and I like her alot. Sebastian is sexy, but far too secretive and confusing with his emotions and motives. But still very sexy.
The sex and heat in this book is stupidly hot. The tension and chemistry is on fire, even if it's a little risky and dubious, it's still amazingly hot!!

Seize, book 2 and the continuation of Lillith and Sebastian's story. Still at full speed, still with all the secrets, and craziness. It's still mega confusing, and really hot. But the story unravelling is still so clever, I find myself in shock at how it all unravels and progresses. It really was such a clever idea.
Although to think about it seriously, the background story about Genesis is incredibly scary and possibly even true somewhere in the world, and it's pretty awful too. It still struck me as incredibly clever, and I love how much detail went in to the planning and background of this whole world. Seriously genius.
The sex and heat is off the charts again, and makes it all the more an addictive read.
The end of this story was good, and I was happy with how it ended, for all the pain and confusion, poor Lillith is put through, I felt happy with how her story ended, and felt satisfied when it finished.


Scorch, book 3 is Ashley's story. It still follows the main story, and the background as Ashley was also involved in the events that happened to Lillith back at the beginning, as she was Lillith's best friend. But it follows her path, and what happened her over the time that Lillith's story is told.
Without sounding really confusing, and I know this review must be, but there's only so much I can say without spoiling the main story, but basically Ashley is also in the mental institute, and we get to see her side of the events that take place, and how she coped throughout, and what happened when she finally got out.
Again, very twisty, INCREDIBLY confusing as it goes backwards and forwards in time again, but still very sharp, dark and gritty.
If I'm truly honest, I don't think I needed to read Ashley's story, yes it was important and I would of liked to know what happened on her side of things, but I think it would of been better as a novella story.
This story was actually really dark, and probably the darkest in the whole series, from the graphic scenes, which was great. But the parts where Ashley was in the mental Institute did drag a little for my liking, which is why a shorter novella would of been perfect, just highlighting some of the parts.
But all in all, still a great story and I really enjoyed it.  Still very twisty, and very dark and sexy!!


Final thoughts on this box set, Incredibly well written, dark and twisted, confusing and nasty. The background was seriously a clever and genius concept, I almost wanted to just read more on that background, it was sheer brilliance.
The sex and relationships in this series were intense, totally unconventional and confusing, but hot and a great conclusion to all involved.
The characters are different, good different and warm on you in time.
I would definitely recommend this to dark story lovers. If you like things hot and nasty, and most definitely if you love to try and work out what's going on, a mystery which needs a clear head.
Fantastic series, and highly recommended!! 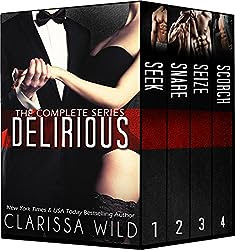 Posted by Anonymous at 7:09 AM