TITLE - When Our Worlds Fall Apart

Love is complicated. Add in high school and it’s bound to get worse. Kennedy Conrad spent her summer hiding from the world, leaving her plenty of time to relive every moment spent with Graham Black. Now at the start of her senior year, she has one goal. Avoid the boy who broke her heart. He seems to be everywhere she turns.Letting go isn’t always the easiest thing to do. Graham Black spent his summer parading around with nameless girls at endless parties. At the start of his senior year, he pretends to be okay with his choices and masks his pain, but Graham can’t escape the reminder of his own broken heart. Every time he turns around, she’s there.Sometimes people come into your life for different reasons. Someone new reminds Kennedy what she deserves, leaving Graham two choices: be pushed back into the shadows or fight for the only girl who’s ever understood him.Can they find their way back as their worlds fall apart?

“4 star, pick yourself up and dust yourself off kind of Novel”
This is the second book of Lindsey Iler’s following Graham and Kennedy. They are going into their senior year of High School and are no longer the IT couple. They are trying to figure out how to just be near each other, but not be together. Like any couple who loves each other, they are struggling with not being together. Kennedy wants Graham, but he won't do it. He believes he's the reason for her problems.

After all the pain and heartache from book one Kennedy has decided to pick herself up and move on. Shes trying to hold herself together, get through the school year, then she's free to get the hell out of dodge.

Mark, Graham’s former best friend sets his sights on Kennedy. He's not afraid of Graham. He helps Kennedy heal and become whole again. With Graham out of the picture Mark quickly becomes someone she can count on. Only problem is, he falls for her, does she feel the same or is she holding out for Graham?

After leaving Kennedy, Graham fell back into his former manwhore ways. He can't stand to be around her and not be able to touch her. It becomes even harder when Kennedy and Mark get together. Can he keep it together? Can he really take up Kennedy's offer and be just friends?

The struggle is real in this book! We don’t get the answers we want or feel like we deserve. Once again Iler kept us hanging at the end of the book. We will have to wait for the third and final book to find out if Graham and Kennedy make it in the adult world. Or maybe all they are, is each other's first loves and we will meet their forever people in college. The only person who knows is Iler and she's holding her cards close to her chest.

In When Our Worlds Fall Apart you get to know the secondary characters even better and fall in love with them even more.

Here are some of my favorite quotes from this book:

“You’re the most free-spirited, strong, determined girl I know. It’s because of this that I thought I would give back to you because you’ve done so much for everyone else.”

“Life’s no fairytale, but if it were, you and I would be an epic one.”

“Life is not as simple. Once a choice is made, if you second guess your decision, you can either ask for forgiveness or a do-over. I’ve been given plenty of do-overs in my life. Sometimes, I just don’t know what to do with them.”

“We aren’t sad. Our relationship may not have had the easiest start and middle, but I would never describe our love as sad. I gave up on us for you, and to this day, I regret that choice, but only for selfish reasons.”

“There has never been any doubt of the love we share. It’s the type of love we feel even when our worlds aren’t connected, even when things seem impossible and broken. A love like ours, you fight for. A love like ours means we’ll always find each other.” 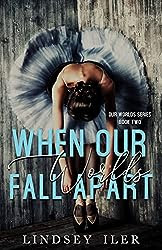