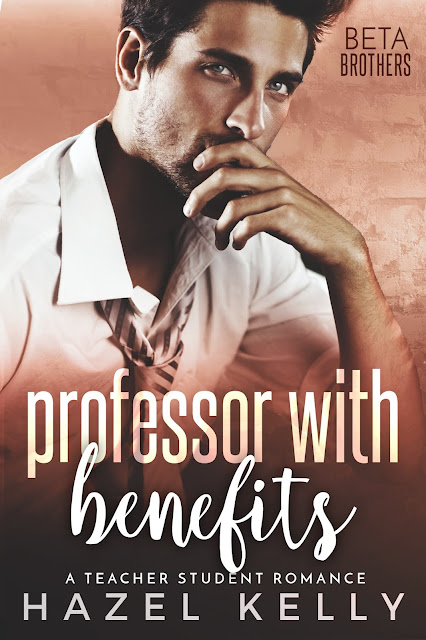 Today we have the release day blitz for PROFESSOR WITH BENEFITS by Hazel Kelly! Check it out and be sure to grab your copy now!

About PROFESSOR WITH BENEFITS:
Sadie’s no princess, and she doesn’t appreciate being treated like one. As far as she’s concerned, women who don’t wear ridiculous shoes don’t need to be swept off their feet, and the last thing the world needs right now is one more hopeless romantic maiming one more unsuspecting daisy.

But when a handsome, young professor takes an unprofessional interest in her mossy green eyes and muddy attitude, she can’t help but enjoy the sparkly feeling his attention stirs in her. And the more he lays on the charm, the more she fears she’s not as attached to her loneliness as she once thought.
Too bad he’s off limits. Then again, limits have never really interested Sadie.
But dreamy professors with penetrating blue eyes and sinfully sexy stubble? That’s a subject that’s about to make her senior year very interesting indeed…

Exclusive Excerpt:
I licked my lips, turned on by the torment in his face. No one had ever wanted me like this. It was like he didn’t even care what was at stake, like wanting me wasn’t a choice.
My mind flashed back to the first day of class when I told him I would’ve given him everything. At the time, I’d been teasing him, having a bit of harmless fun. But it didn’t feel so harmless now. Now that I realized I meant it. Now that I realized I didn’t just want to get naked for this guy. I wanted to strip down to my soul.
His eyes searched mine as he clenched his jaw, holding his tension there for ages. It was like time stood still. We didn’t move. We didn’t breathe. We didn’t blink. Soon, the thundering rain softened slightly, and a few minutes later, it let up a little more. Still, we stayed put.
I wondered what he was thinking, but nothing could’ve improved on the silence between us just then. It was perfect, delirious. Besides, I didn’t have a coherent thought in my head. All I had was a bunch of feelings, and those were even more impossible to interpret. They wouldn’t even hold still. It was like they were exploding inside me like fireworks one after another, a chain reaction of punctuated bliss and paralyzing sexual frustration.
The twenty-two bus pulled up to the shelter as the rain stopped, and Kellan waved the driver away when he opened the door.
“We should’ve gotten on,” I said, smiling as it pulled away. “See where it might’ve taken us.”
“I thought we were happy here.” His crazy blue eyes sparkled. “I was thinking we should never leave.”
“It would be easy to invite friends over,” I said. “Living right on the bus route.”
“No. No friends. No visitors.”
I scrunched my nose. “Just us? At this bus stop? Forever?”
He squeezed the back of his neck and looked me up and down like I was magic. Like I’d enchanted him, and he never wanted to come out from under my spell. “We could do worse.” 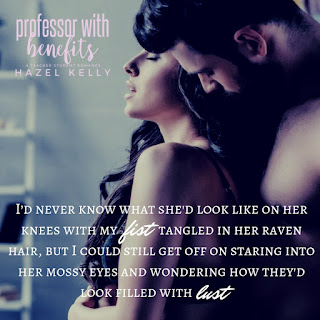 About Hazel Kelly:
Hazel Kelly is an Amazon bestselling author who writes sweet and steamy romance that will make you smile all over.

When she's not traveling the globe in search of cozy hammocks to write in, she enjoys tackling her tbr list with a nice big glass of anything will do. She lives in Dublin with a charming Irishman and their three-legged furbaby. 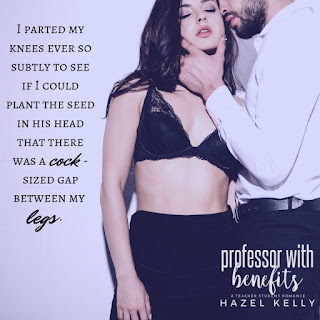 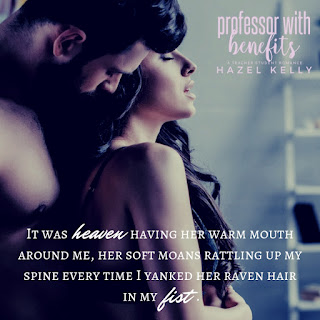 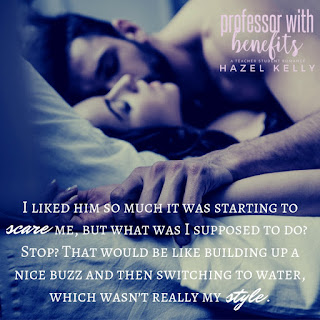 
Professor with Benefits is the 3rd book in the Beta Brothers series and can be read as a standalone, as I hadn’t read the previous 2 books, I was worried I wouldn’t know the characters; I didn’t need any other information than what was in front of me.

Kellan is a professor and is loving his research in their lab, teaching is not something he loves as much. Sadie’s record with the school was rocky and she was going into her senior year on very thin ice;

When he meets Sadie through his younger brother, he is taken back by her. Sadie not his typical woman but she has so many layers that once he starts peeling them back, he is willing to break all the rules to make sure he holds onto her.

While they both knew what they were doing could get them into some serious trouble their chemistry was undeniable pulling them together like magnets.

Kelly is a new to me author and I personally enjoyed reading this book, I have added books 1 & 2 to my TBR list because I really want to know more about this group. I look forward to reading more in the series.