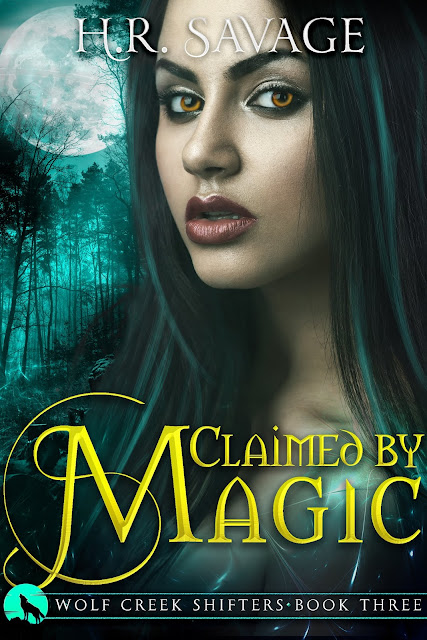 The scorching final novel of the Wolf Creek Shifters series...

Fallon Stone is a lone wolf...and she prefers it that way. Sick of stuffy Alphas telling her what to do, she lives on her own in a tiny Wisconsin town, determined to fight her wolf’s need for a pack. When an egotistical Warlock shows up and tells her she’s in danger, she dismisses him, and his desire, to help. That is, until death shows up to take her down.

As the anticipated next leader of his coven, Warlock Aidan Wood always follows the rules. But when a vision shows him the death of a familiar sexy Shifter with gold eyes, he battles with the desire to save her and the laws that have been pounded into his head. It doesn't help that she wants nothing to do with him.

Her impending death is looming, with a threat that goes deeper than either of them imagined. Now, Aidan must choose between what is easy and what is right. 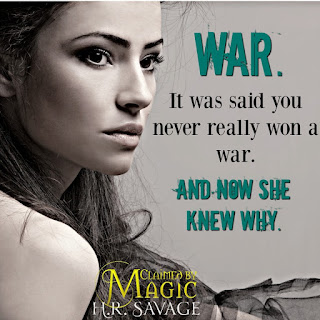 Author Bio:
Author H.R. Savage (Heather) started reading romance at an age that made her father cringe as she tried to hide the cover behind her hands. Due to the encouragement of her English teachers at her small town school in La Verne, California, her love for the art of writing only grew and blossomed. Now a woman who swears by the power of coffee, Chinese food, and wine (not necessarily in that order), she decided it was time to create stories from the characters in her head.

When Heather isn’t writing, outlining, or pinning pictures of hot ‘character inspirations’ on Pinterest™, she is spending time with her three beautiful children and handsome hubby at their home in San Bernardino, CA.

Excerpt:
“I like you in this sweater.”
She laughed. “I think you like me in anything I wear. Especially if it’s nothing.”
“Mmhmm,” he agreed, using his tongue against her skin, paying special attention the area behind her ear. She tilted her head back against him and sighed.
“Aidan,” she reprimanded, flipping the pancake to the uncooked side. “I’m cooking. I’m hungry.”
“I see that,” he mumbled, then nipped the end of her ear. He pushed her hair away from the back of her neck with one hand and continued his exploration with his mouth. The taste of her skin against his tongue was better than any pancake could ever be.
“But we have a problem,” he continued, sliding his hands up the front of the sweater. The flat of her stomach twitched when he trailed his hand over her belly button and she sucked in a breath. “I’m craving something even better than pancakes.”
“Nothing is better than pancakes,” she said, her voice light and breathy.
“Oh, I beg to differ.” He cupped her breasts in his hands, the rounded globes filling his palms. She dropped the spatula to the counter and gasped when he pinched her nipples. They pebbled between his fingers and he sucked on the skin on her neck.
“The food is going to get cold,” she said, still making excuses even though her back arched, pushing her breasts further into his hands. He used one hand to grip her hip and rubbed his rock-hard cock against her.
“I don’t care. Come back to bed with me, Fallon.”
She groaned, the frustration clear, but she quickly flipped the heat off on the stove and turned in his arms. “You’re insatiable.”
Only for you, he thought, but couldn’t voice it. Instead, he captured her lips with his own and lifted her. She wrapped her legs around his waist and pulled at his hair. The sharp pain at his scalp made him hiss and bite on her bottom lip. She gasped and leaned back, gazing into his eyes. Those amazing golden irises searched his own, her lips already red from the night before.
“But I get it.” 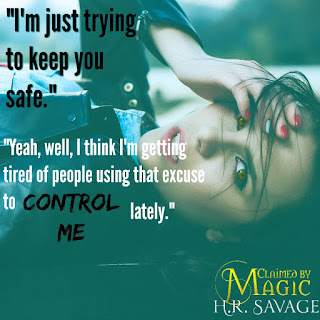 Do you believe in magic? Claimed by Magic is the third book in the Wolf Creek series. Each book follows different main characters so you are able to read them as stand alones. I suggest you read them in order though as you do get to see what those other characters are up to. This book was great. The mystery, action, and romance was just what I needed.

The plot of this story is interesting. You have a lone wolf, tired of following the rules of others. She wants to live an independent life and not rely on anyone else. Her only problem is her wolf craves pack life. Then you have a powerful warlock who has responsibilities. He has his own journey to traverse which will lead him to a decision. Which choice will he choose?

Fallon is a great character. I loved her independent ways. I feel like she is a good character for others to look up to. She is not willing to conform just because others want her to. Then you have Aidan. He is one of the best characters I have read in a while. I loved reading about him. He is strong and protective, but also has a good heart.

The heat in this book was perfect. I really enjoyed the way the author was able to include heat in between the action. I felt it was perfectly placed and did not take away from the overall story.

The writing style in this story is good. The pace of the story is steady. The story is told from dual points of view. I liked seeing the other characters and getting a bigger picture of what is going on. The only complaint I had was I felt the third person narrative was a bit much for me, but it didnt ruin the story. Just took some getting used to.

In conclusion, I loved this book. I would recommend it to others. I have already recommended the series to others. I cannot wait to see what this author does next.