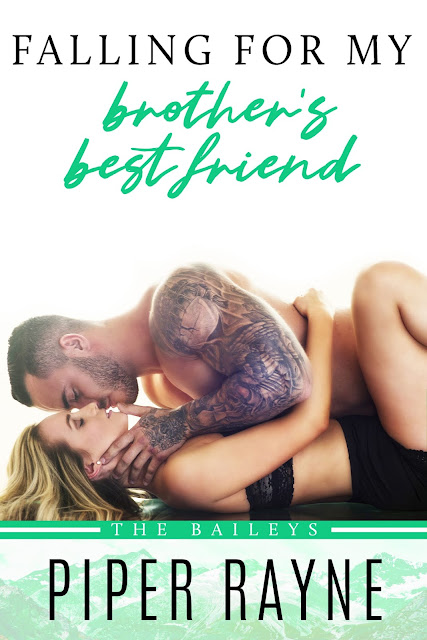 Let’s say you’re an independent, self-sufficient woman who runs the family company and you find yourself falling for your little brother’s best friend. Now, more than ever, you need to count all the reasons why you need to abandon falling.

Abandon Falling #1 – He’s a womanizer. Hasn’t had a serious relationship a day in his life and changes women more often than he changes his sheets.

Abandon Falling #4 – He has tattoos. Lots of them. Everywhere. Not to mention, he owns a tattoo parlor. (Damn it! Why doesn’t that sound like a bad thing anymore?)

Abandon Falling #5 – There’s a growing list of how different you two are. You can’t get along for fifteen minutes—a lifetime together would land one of you in prison.

Keep repeating those reasons and drown yourself in work. Pretend you don’t notice his good qualities or how enticing he looks without a shirt, and do not, I repeat, do not agree to live with the man while your place is being repaired from flood damage.

Trust me, even the strongest of us can only forego temptation for so long.

Louise's Review
Ditch adulting because this is the book you can’t and won’t put down; Piper & Rayne has delivered again, Savannah the responsible Bailey has come out to play.

Liam has been part of the Bailey family for a long time, he has been infatuated with Savannah since he was a teenager. Savannah is all work; she has a responsibility to her family and she won’t be the one to let anyone down. When their friendship turns toxic will are, they able to forgive or walk away and ignore the chemistry that is between them?

The moment Savannah and Liam hit my kindle I knew that I needed to make sure my day was cleared. Piper & Rayne have again written a story that makes you want to want to be part of Lake Starlight; I am counting down till I can get my hands on the next Bailey’s instalment.

Johnaka's Review
“The Bailey we’ve been waiting for, 5 stars”

Okay, I just want to say I’m excited and love all the Bailey’s. But for me personally Savannah’s been the one that’s held back. She’s there, she’s active in everyone’s lives, but she’s never really had a life outside of work for herself in my eyes. So, when Falling for my Brothers Best Friend landed on my kindle I got excited. Piper and Rayne killed it. The transformation that Savannah goes through is amazing.

Savannah is all work, family, and that’s about it. She doesn’t have time for any distractions, and Liam is most definitely a distraction. The chemistry is there but chemistry isn’t everything. Will Savannah let her guard down and let him in further than he is already? Or will she not even give him a shot?

Liam has always wanted Savannah. He sees her when no one, not even herself does. But sometimes life doesn’t work out the way you want it to, kind of like him wanting Savannah and her not being interested. Are they doomed to be stay in this toxic verbal sparring forever or will they lay down their hurtful words and make nice?

Liam is one of my favorite kind of hero’s, a little bit bad, a whole lotta good, willing to fight for what he wants kind of guy. I will be honest there was a couple times I desperately wanted to reach through my book and slap Savannah across the face and scream OPEN YOUR EYES! But I couldn’t. With that said I think Piper and Rayne wrote them the perfect story for who the characters were. It was the kind of love story they both deserved. And the ending has me waiting for the next Bailey story.