Finn Anderson is a loyal military veteran who has no desire to live a life of luxury and ease, but sometimes a person doesn’t get a choice. His life is flipped upside down when he and his four brothers learn they’re long-lost relatives of the absurdly famous and wealthy Joseph Anderson. The eccentric but generous billionaire puts the brothers to work building a new veterans center, and that’s not all: Joseph won’t stop until each nephew finds love.
Finn has never expected or wanted an easy life, and he struggles with his early retirement from the elite SEAL team. But when a very confident Brooke Garrison literally sweeps him off his feet during a self-defense class he’s teaching, he thinks less about his past and more about a brand-new future.

If Finn knows anything for certain, it’s that he can’t let this woman get away. Though Brooke is tough and compassionate, the loss of her brother has left her vulnerable. She isn’t sure she can risk loving and losing another person in her life, including a very determined ex-SEAL. Can the two of them look beyond their past wounds and embrace what they’re feeling?

Finn is a whole lot of broken after getting injured while deployed, getting out of the military, and losing his mother all at once. When Joseph Anderson comes out of no where with a project and wanting to connect after finding his long-lost family members Finn doesn’t know what to think. What he didn’t expect was to meet Brooke and fall for her at first sight. Will he be able to get the girl, handle his new large family, and take on this project or will it get the better of him?

Now I want to be upfront with you and admit I did enjoy Finn and Brooke. I loved how he was done from the get-go and wasn’t afraid of a challenge. I don’t blame her for being hesitant. The 3 stars has nothing to do with not liking the story but all to do with what I was expecting. If you’ve read any of Melody’s stories where the Anderson’s are involved, you know they are a loud crazy group. And yes, we got Joseph in this one but not nearly as much as usual. I just missed the Anderson’s that we’ve came to know and love and that’s on me and not Melody. So, if you’ve read her stuff be prepared that they aren’t there like were used to, but if you haven’t then you should love the story. 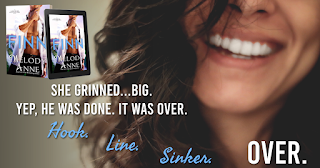