Release + Review - If you Say So - Lani Lynn Vale 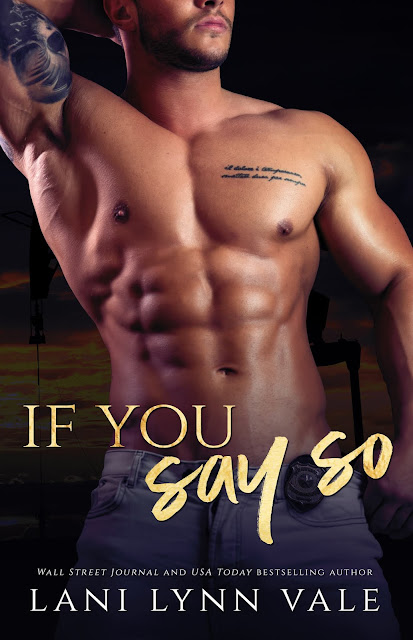 Gabriel Luca Maldonado, III and Francesca Leandra Solomon were meant to be. They were so in love that everybody prayed for what they had.
Everything was glorious. They would get married, have children and live a perfect life. She would be a doctor in the emergency room once she finished her doctorate, and he would be a badass Navy SEAL and save people for a living.
But then Luca is deployed across the world, and per military regulations, Frankie isn’t allowed to follow.
They’ve overcome a lot in their short relationship, and they can overcome this, too. Two years was a piece of cake. She’d finish her schooling and wait for him. And when he finally returned home, they would marry.
But two months into Luca’s deployment, the unthinkable happens, and Frankie is left alone and heartbroken, knowing that she’ll have to face the rest of life without Luca at her side.

Fast forward two years, and Frankie is exactly where her fiancé’s father left her, in a pit of despair that she has no hope of ever finding her way out of.
She lives life one second at a time, depressed and alone, hoping tomorrow won’t hurt like today.
She finds a job, moves, and hopes that the nightmares won’t swallow her whole.
But just as she thinks that she’s getting better, one of her nightmares walks through the doors of her ER, and that nightmare has a name.
Gabriel Luca Maldonado, III. In the flesh.
Also healthy and whole, and definitely no longer missing.
Sadly, it only takes her a half a second to realize that the man that left her isn’t the same man that returned.
The old one wanted her. The new one? Well, he’s definitely not interested anymore.

I don’t even know how to review If You Say So without giving too much away. Vale had me spinning for a hot minute questioning if what I thought was going on actually was. If You Say So was beautifully written. I only had one little hiccup with the story as a whole but it wasn’t anything that influenced my opinion of the story. If you one-click If You Say So I think you will highly enjoy it.

Frankie Leigh has known love. The unconditional, life changing kind. Luca was her everything. But her life has been in limbo ever since Luca went missing. When someone who looks, acts, and talks like Luca shows up in her life but doesn’t know who she is she doesn’t know what to do. Is she projecting her hopes that Luca is back? Or is he really? Only one way to find out.

ABOUT THE AUTHOR:
Lani Lynn Vale is a USA Today Bestselling Author of over thirty titles. She is married with three children, two dogs, two cats, a donkey, and a couple (a couple also meaning over twenty) chickens.
When she’s not writing, you can find her curled up in her favorite chair reading.
Lani is married with three children and lives in the Great State of Texas.