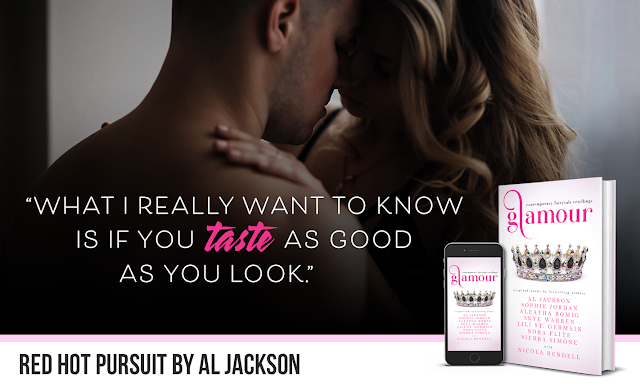 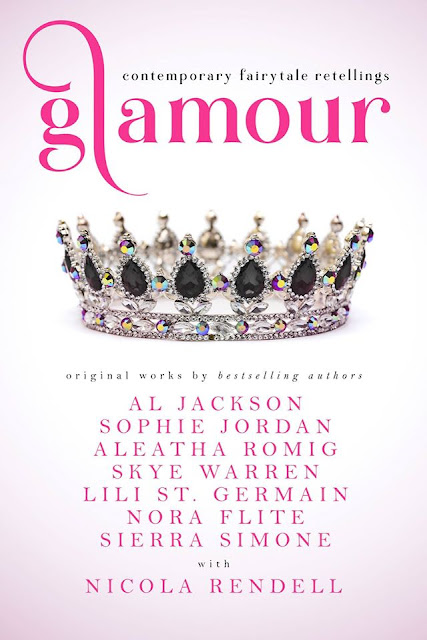 Once upon a time...
Remember the fairy tales your parents read to you when you were little?
These are NOT those fairy tales.
From modern day royalty to metaphorical dragons, contemporary castles to sexy heroes, these bestselling authors twist tales as old as time into something new.
GLAMOUR contains eight exclusive never-before-seen novellas that each have an HEA... because they all lived happily ever after.

Red Hot Pursuit - A.L. Jackson
Chapter One:
Broderick
I’m not sure how you handle things where you come from, Mr. Wolfe, but I can assure you it is not how we handle things in Gingham Lakes. Mrs. Tindall has been a value to our small community since the fifties, and her family long before then, and I have every intention of securing that legacy for many years to come. Why don’t you make things easier on yourself and remain in your high-rise office, which I’m sure affords you quite the dramatic view of Manhattan. You seem better suited for that than our ‘provincial’ town.


I didn’t even fight the satisfied smile that pulled at my lips as I let my eyes retrace her latest email.
God, this woman was a handful.
Determined and feisty.
A challenge I couldn’t wait to take on.
For the last five months, we’d been going back and forth via email. My interactions with this tough-as-nails attorney, who was working pro bono for a tiny company in an even tinier city in Alabama, had escalated with each click of send.
Maybe it was a little sick that I’d come to crave this game.
Cat and mouse.
Round and round.
She was sharp and obviously loyal. I’d never even seen her. But apparently, I didn’t have to. Just sitting there and reading the fight in her words made my dick hard.
There was nothing like a strong woman who knew what she wanted.
The best part was I wanted it more.
My laptop screen burned through the dim light of my high-rise office, which did indeed offer the most spectacular view of Manhattan. With a smirk, I leaned forward and let my fingers fly across the keyboard.


That is where you’re mistaken, Ms. Redd. I’m sure you’re well aware of our company’s reputation. The Wolfe name is the very definition of success. It’s the cornerstone on which our company has been built, and I will not let that name be tarnished. I will have that building, and in the end, my hotel will stand in its place. I’m trying to be fair, but make no mistake, if you force me into a corner, I will come out, teeth bared. I’ve been told they’re sharp.


A shock of lust curled in my gut as I sent the email. Why did I get the feeling I would love sinking my teeth into this woman?
It took only a few moments before my inbox pinged with a new message.


Is that a threat, Mr. Wolfe? Because if it is, I can assure you, my nails are equally as long, and I never hesitate to fight back.


Visions assaulted me. Ones of her nails clawing at my shoulders and raking down my back. Her body straining beneath mine as I ravaged her.
My breaths turned shallow as I typed out a response.


Is that a promise or your own threat, Ms. Redd? I’m up for either.


God. What the fuck did I think I was doing? I’d always been about the job. But this woman…this fiery woman had me stepping out of bounds. Saying things I knew I should never say.
Her response was almost immediate.


Don’t flatter yourself. You’re clearly compensating, and I definitely don’t need that kind of disappointment. Save yourself the trip. You wouldn’t want to embarrass yourself with that kind of failure.


“Oh, you went there, did you?” I murmured beneath my breath. I fucking loved that she didn’t hold back. My teeth scraped my lower lip, my mouth watering as I gave into the chase.


Failure is not a part of my vocabulary, Ms. Redd. I think we’ve already established that. But don’t worry, at the end of all of this, you will be thanking me.


I pressed send a little too eagerly, becoming even more excited when I clicked into her quick response.


Only in your lofty, lofty dreams, Mr. Wolfe. I will see to it those dreams are crushed.


A chuckle rumbled free, and I rubbed at my jaw. She had no idea just how much pleasure I would take in crushing her.
This could have been an easy acquisition.
We’d made a more than generous offer, after all. Instead of accepting it and moving on, they let nostalgia taint their decision and rejected the small fortune.
Some people didn’t seem to understand when it was best to take the path of least resistance.
But you wouldn’t see me complaining. They had no clue just how much I relished the battle.
My cell bleeped and lit up where it rested on the glass desk, and I subdued the irritation that fought to work its way up my throat. I cleared it as I rocked forward and accepted the call.
“Father,” I said by way of hello as I stood and shrugged into my suit jacket before closing down my laptop and sliding it into its leather case.
“Son. Tell me you’ve taken care of the issue.”
“I’m working on it.”
“Working on it isn’t good enough. I needed this finished yesterday.”
I gritted my teeth in an attempt to keep from spitting the words at him. “I told you, I would handle this one my way.”
He huffed. “Haven’t you figured out yet that your way doesn’t work?”
A jolt of bitter laughter tripped from my tongue. “I think I’ve cleaned up enough of your messes that you would have realized by now that it does.”
If it were up to my father, he would have gone in there and basically stolen that building right out from under that old lady. His men had no qualms about making a threat or two to get what he wanted, bending people to his will by cowardly shows of force.
Silence traveled the line, the two of us at odds, the constant contention that had churned between us since I was a little boy so close to reaching its boiling point.
“Two weeks, Broderick. Two weeks,” he finally said. There was no missing the threat.
“I won’t need them.” My voice lowered. “And I’m warning you—do not interfere in this. I will do this my way.”
“We’ll see.” That was the last thing he said before the line went dead.
Fuck. I squeezed the phone in my hand. It took every ounce of willpower I had not to send my phone sailing through the air.
Broderick Wolfe Sr. thought he was the epitome of success.
Believed his efforts were what Wolfe Industries was built upon.
When in truth, the man was nothing but underhanded deals and greed.
Those were footsteps I refused to walk in.
I worked relentlessly for what I wanted.
Chased it.
Hunted it until I had it in my clutches.
And when I won? It was because I was actually the best at what I did.
I buttoned a single button on my jacket and shook out the cuffs. Lifting my chin, I grabbed my case and strode out the door.
I had work to do.
And I was going to love every second of it.
Posted by Louise Seraphim Reviews at 8:00 AM